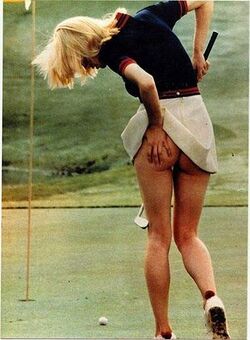 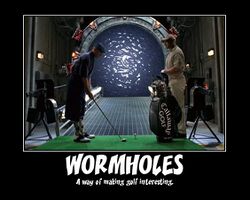 Golf (guys only, ladies forbidden) is a form of medieval satanic torture. It also gives you burns on your face when you take over half an hour trying to get a ball inside a hole. It involves a thin iron club and small puckered balls. The hidden message can be found in the name of the 'sport' itself. Typical backwards satanic writing reveals the name to be FLOG ... speaking volumes.

It is well known as being the only activity in which you can wear a watch whilst playing and you can have goofy pants and a fat ass. Golf is also the most boring activity to watch on television. It is in no way a sport.

Players of golf are known as golfists or fat wankers and study of the game is known as golfology. Players use Golf raquets to whack a dimply billiard ball down the golf court. There are many types of golf courts in the world. It's a well documented fact that jews are forbidden from playing or acting like golfists. Contrary to popular belief Golfists do not use a country club to play the game. Country club are infact an 80's pop band fronted by Boy George.

It's not another picture of a girl. Sorry.

While no two courses are alike, many can be classified into one of the following broad categories: 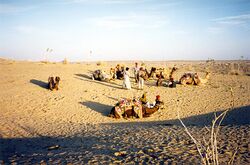 This landscape has wide acceptance among English golfers. 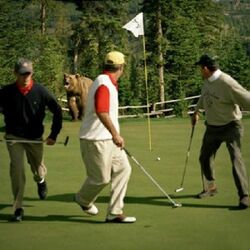 Part of the joy of golfing is getting close to nature.

In the United States design varies widely, with courses such as the entirely artificial Shadow Creek in Las Vegas, where a course complete with waterfalls was created in the desert, and on the other end of the spectrum, Rustic Canyon outside of Los Angeles, which was created with a minimal amount of earth moving resulting in an affordable daily green fee and a more natural experience.

The History of Golf

It is well known that Lieutenant Jovial Jops of "Sensible Software” invented Golf accidentally when they were reworking “Cannon Fodder 3” for the X-Box 360. PC Magazine “Currant Bun” gave the invention of Golf a whopping 2/10 for skill. Jops was known to swing a baseball bat at his computer when he got stuck. His staff members created a thinner baseball bat which bent and formed what is now known as the golf club. Disgruntled 500 owners can't wait for "Golf 2" in which baseball bats will replace the old clubs. Some golf courses are known for gay sex in the middle of the green. Its usually when two guys find each other and engage in the act of anal sex and usually finishes with one guy saying "whos your daddy". Or until somebody bleeds or is given another hole for which another man can screw in.

Another rumour surounding the origins of golf is that in the 15th century when gay people were widely unaccepted they need to create a place where they could put balls in holes and not be burned at the stake, they would tell there wifes they were going to play a game of golf. 1 day a rich mans wife followed her husband and realised he was attending an all male orgy. The man therefore invented the real game and said he slipped and that is how he ended up in the predicament, golf today is played by gays worldwide. Golf means Gentemen Only Ladies Forbidden.

The reason that a golf ball has so many little holes on it is very simple. The holes make sure that when the golf ball flies through the air, the space/time vortex is not disrupted and the world will not explode. However, some people believe that this is just an excuse made by the Arabian merchants to sell more crack. This is still a theory, and Adam Sandler is currently working on a new cure for golf-related stupidity worldwide.

Tournaments are held on polar ice caps, the Arctic Ocean and specific sectors of the continent of Antarctica are reasonable locations. There are no golf balls used in these tournaments. Instead, golfers must seek out baby seals to club.

Although often overlooked, there is much scientific research being done in order to improve everyone's game. Usually companies will change something about their clubs every year hoping to find the secret to lower golf scores. But somehow the new innovations don't change the mediocrity of everyone's game. Most golfers feel that white golf balls are superior to colored ones. There were some attempts by some golfball manufacturers to sell BLACK Balls to inhabitants of the GUlf of Mexico, but players found that the balls disappeared into the fossil fuel laden waters. It has also been proven that golfers sponsered by Nike tend to hit the ball further. This is credited to the swoosh logo which improves the aerodynamics of clubs, balls, and clothes. 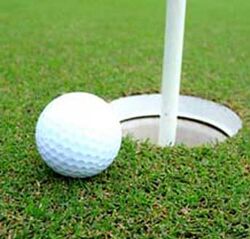 I need my Ball back.

Another form of golf is minigolf, a sport for generally lame or short people. In this type of golf, you hit golf balls at other peoples houses and windmills. The goal of this game is to get as many golf balls as possible lost in either the myriad of bushes, the strangly colored ponds, or the pot of gold at the end of the rainbow(if you hit the leprechaun, you get $5). The pot of gold is called "The Endless Vortex" or "The Last Hole" by employees, but they're all idiots. We know it's a leprechaun. The setting of minigolf course has been in many science-fiction novels, and is deeply intertwined in conspiracy theories. Many believe that mini golf is a form of communication with satan. Golfists maintain this is not true. However, many secrative ceremonies are held mid - round in the bushes by golfists. Is this Satanic worship, or simple homosexual tendancies? 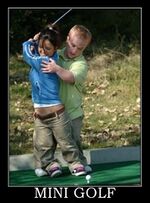 Let's be racist to little people!

From the makers of golf and minigolf, comes: Tinygolf. This new form of golf is fun! Its so fun, you need to be Tiny Kong to play it! 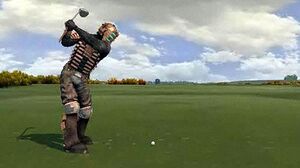