“ I imagine that right now, you're feeling a bit like Alice. Hmm? Tumbling down the rabbit hole?”

~ Guy who sucks at sexual jokes on hole 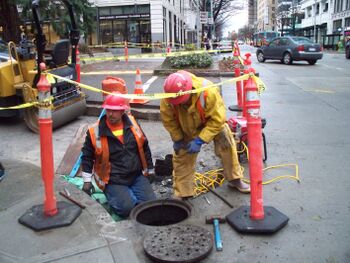 Two guys looking at a hoe, I mean hole.

Holes are one of the great mysteries of the universe and can be found almost anywhere. You have some holes too, especially the one between the ears.

You came out of a hole about 9 months after your dad shoved his tiny cock with a small hole on top for semen, sprayed into your mother's gigantic STD infected pussy hole. You don't remember? Ask them to see the video. When you die, unless cremated, you will be thrown back into another hole.

Holes may be used for many things. You can hide stuff, bury treasure, and stick radioactive waste in them. Best of all, you can make low-budget movies about them. Holes generally have a lot to do with Them.

Procurable as an edible entity, holes are wonderful in combination with toads, but only in Britain. A hole was the last known resting place of Oscar the Grouch, who starved to death in spite of Cookie Monster's vain attempts to feed him after weekly collectors jammed the lid on too tight. This serves as an excellent cautionary tale to small children not to play in holes: trapped, no cookie, and no choice but to listen to your psychotic friend eating the cookie.

How to manually demonstrate the concept of hole

Black holes are the opposite of white holes. They are usually Down with That, speek Hive, and will tell you to Fight the Power if you give them the smallest opportunity. Black Holes also have a tendency to make bikes and TVs disappear. An example of a black hole is Justin Bieber's vagina.

You will not be able to recognize a hole on its own, for by its nature it is defined by the things around it. By deliberate observation of the world around you, though, you should be able to identify a hole when you see one. Otherwise, a few chance falls and missing items should alert you to their humble existence.

No you can't forget

that you cannot get

-- Nursery rhyme, found taped to the door of an abandoned cage deep beneath Jerkwater, USA. Part of a qualified program of foreign language instruction certified by the State Board of Education.

And now you can own your very own hole

Of course Beatles fans will already know where this came from within the lyrics of A Day In The Life: I read the news today, Oh boy! Four thousand holes in Blackburn, Lancashire. And though the holes were rather small, They had to count them all; Now they know how many holes it takes to fill the Albert Hall.

What they probably don't realise however is where that original comment came from in the first place:

According to road surveys carried out by the Ministry of Transport in conjunction with The Lancashire County Roads Office, there are more than 4000 holes in the road in Blackburn, Lancashire, or one twenty-sixth of a hole per person. If Blackburn is typical then there are over two million holes in Britain's roads and 300 000 in London.

Now by inference if there is 1/26th of a hole per person, and the Royal Albert Hall holds 5,544 people including standing in the Gallery due to fire and safety restrictions, then it follows that this Grade I listed building requires a mere 213 holes to fill it, which is hardly what one would call a "Sea of Holes" at all is it?

In 1998 Reese Witherspoon appeared on the Jerry Springer Show to promote her misguided Save the Holes Foundation (due to an earwax blockage problem, she had thought her publicist suggested this when in actual fact he had said Moles). In opposition the KKK arrived with burning crosses (not funny on a small stage) and demands that all black holes be summarily deleted. Chairs were thrown. A ruckus erupted. Witherspoon was punched in the nose. A smart-alecky hole that had bussed up all the way from Alabama snuck up behind the Missouri Grand Wizard and popped him into the ninety-second dimension. Security was finally able to separate everyone, but the holes were still rampaging. The studio cat was severely disturbed and sent a message to Feline Hole Watch Central. Jerry went to commercial, then came back and calmly whined in his inimitable style:

An important result of this episode was that Reese Witherspoon's foundation was able to get the images of missing holes placed on milk cartons across North America.

In Brostamatism, the religion of saharan golf balls, holes are the creation of the evil god Hullull, and should therefore be avoided.