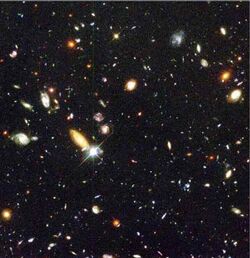 Far beyond cashew nuts, the Universe is a savoury mix of cashews, walnuts, and creme-filled nougats.

“The Universe...It's So Humongous Big!”

~ Ilya Bryzgalov on the Universe

“Look at the size of that one!”
~ Oscar Wilde on the Universe

“Believe me, I've seen a lot of big things, but I've never seen anything this big.”
~ Oscar Wilde on the Universe

The Universe is big. Really, really big. If you could comprehend just how mind-boggingly big it is, your face would melt. 'Nuff said.

The Universe is, like, everything. It's also all that stuff which isn't really anything but contains everything else. That's the Universe. Really, it's quite impressive when you think about it. I mean, if you're anywhere, chances are it's somewhere in the Universe. Now, that is large. You say the rude kid down by the butcher's told you your mom was fat? Well that's just tasty cashew nuts to the Universe. It is the real broad here.

Where the Universe came from 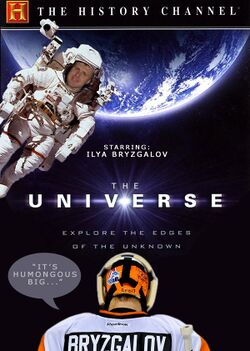 IT'S SO HUMONGOUS BIG!

“Let there be light!”

~ God on the Universe

The topic of the origin of the Universe has pretty much got a stranglehold on the all-time-best-seller lists — not to say that Harry Potter and the Michelangelo Code haven't been selling well these past 13.7 billion years. Every publisher knows that the big money is in religious texts about life, death, spirituality, and shit-like-that-there. According to these books, what happened was this: There's a guy, and he's called God. God says, "Let there be light." And (him being God and God by definition being omnipotent) damned if there wasn't light. Unfortunately, God was still a little hung over from the night before so he just turned the light straight off and went back to sleep until he could face separating the waters. And so like this he continued, furthering the bounds of reality in this sporadic and haphazard manner, building up his collection of timeless vinyls day-by-day until he had a whole Universe to play with.

That, of course, is crap, i'nnit? No, there's no God; the Bible is no more coherent than the collected verse of Edward Lear, and you'll have to find a different reason for the next Holy War.

What really happened was The Big Bang: a great big huge world-making dimension-shaking bang. Except of course it wasn't big, it was infinitesmally small. Presently, this ineptly titled fireball, not unlike an unstable South American economy, underwent a sudden period of hyper-inflation. So, in marginally less time than Usain Bolt could run a nanometre at full pelt, sub-atomic particles formed, matter defeated anti-matter, and Hugh Grant established himself as the archetypal bumbling Brit. In the aeons that have followed, our Universe has expanded, cooled, caught VD, and allowed stars and atoms to form, though probably not in that order.

Population of the Universe

“I may make you feel, but I can't make you think.”

The population of the Universe is — surprise! — also shrouded in controversy.

NASA believes the Universe's total population is roughly seven billion. This measurement is not of "intelligent life forms," on which we gave up long ago, but merely of "sentient beings," most of whom feel they'll stay right where they are, which is hugging a spinning dirt clod with the appropriate name of Earth. Despite billions being spent to detect extra-terrestrial intelligence feelings, there seem to be none other anywhere in the Universe — which, of course, is merely a commentary on the need for greater funding levels for the program.

These scientists note that, if other sentient beings were detected, there is no way to actually meet them and learn the answers to mankind's most pressing questions, such as whether Nixon really was a crook and whether eggs are good or bad for you. This is because Einstein's Theory of Relativity prohibits us from exceeding the speed of light. So even if you could build a ship that travels that fast, you'd get obscenely bored during trips to the stars, even if you brought a lot of entertainment along, as everything from yo-yos to marbles to footballs would become prohibitively heavy and cease being round.

What would happen after such a close encounter is more problematic, as mankind has a perfect record so far of responding to newfound sentient life with game preserves, slave auctions, and butcher shops.

Scientist Douglas Adams, however, takes a competing view. He says:

“It is known that there are an infinite number of worlds, simply because there is an infinite amount of space for them. However, not every one of them is inhabited. Therefore, there must be a finite number of inhabited worlds. Any finite number divided by infinity is as near to nothing as makes no odds, so the average population of all the planets in the Universe can be said to be zero. From this it follows that the population of the whole Universe is also zero, and that any people you may meet from time to time are merely the products of a deranged imagination”

~ Dr. Douglas Adams on the Universe

Dr. Adams' expert opinion is likewise not to be interpreted as advocacy for funding cuts.

The end of the Universe

“Some say the world will end in fire / Some say in ice.”

~ Dr. Robert Frost (if the name doesn't give it away)

Here, too, there is a divergence of opinion. Religion again dredges up their old God character, who will send each of us either to Heaven or Hell based upon the Sudokus we did in life.

Scientists maintain that something else will happen, but whatever it is it will involve neither a supernatural being nor a popular puzzle. One theory is known as the Big Crunch: basically the same as the Big Bang, only in cereal form. The Big Crunch theory states that the Universe will "crunch" back down into nothing just like an atomic bomb only exactly the opposite. Whoever named this phenomenon was just as inept at making up names as people who give their child two first names, like Will Smith.