Almost finished this one! Only took me three months!

“Sudoku is a form of tedium so ugly that we are forced to change it every day.”
~ Oscar Wilde on Sudoku

Sudoku or '"Saki-diki"' (吸毒 [P] or 数性交; from the Japanese 数性交は独身に限る, meaning "magical puzzling secret power mind game for great justice" or "If I don't complete this puzzle within the next five minutes, I will cut my head off rituallistically") is a simple number puzzle that requires no mathematical skill, intelligence, or ability to spell.

Made up of nine nine-by-nine grids which contain some random numbers scattered around, the object of the game is to fill in the blank spaces with other numbers. The digits 1 to 9 are permitted, as well as random scribbles, boxes, arrows, smiley faces, hearts, stars, and horseshoes, clovers and blue moons, pots of gold and rainbows, and the red balloons! shapes.

Success at Sudoku is measured by the amount of time spent filling in the boxes multiplied by the number of 'I'm concentrating hard' faces the solver makes whilst doing so.

Sudoku has also been known to cause heart failure in mice, so it is advised that anyone trying such a puzzle part takes precautions to protect themselves; these include aspirin and someone on hand with an emergency defibrillator. 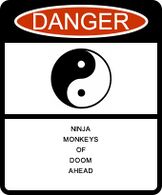 Sudoku was created by none other than God (or "Yahweh") on the 6th day of Creation, so that He had something to do on His mighty day of rest. Unfortunately, it appears that He created a Sudoku so difficult that even He Himself couldn't complete it. The resulting exposure of His lack of true omnipotence was so devastating to God's confidence that He began meddling in minor human affairs, just to prove He was good for something.

Modern Sudoku derives from an earlier Japanese Martial Art known as Sudojitsu (Translation: The Way of Wasting Five Minutes), which was practiced by Ninjas. This was so as to disguise the fact they were about to assassinate a victim by appearing to be innocently engaged in a newspaper-puzzle. Sudojitsu in turn derives from an older Chinese martial art, Shaolin Kung Sudo, which consisted of trying to fit the 64 hexagrams of the I Ching into an 8*8 grid.

Sudojitsu was taught openly to westerners who visited Japan up until 1945, when for some mysterious reason, all the Sudojitsu Senseis suddenly decided they didn't like Americans any more, and banned them from learning the secret knowledge. Americans to this day do not understand why Japanese people hate them so much! However, a small number of Senseis formulated a simplified version of Sudojitsu, from which all the elements of covert assassination and stealth skills had been eliminated. This became the modern form of Sudoku.

The puzzle remained hidden until the early 1980s, when it was discovered by several vagabond members of the Evil Atheist Conspiracy wandering about Japan. They subsequently began publishing it in various puzzle magazines. In 2004, it migrated to Great Britain, where it took the nation by storm, falling from the sky in large, pain-inducing clusters. Much to the chagrin of Microsoft, it quickly replaced Freecell as the primary time-waster in government offices.

Today, the Sudoku phenomenon has spread to all nations of the world except Tajikistan, Niberia, and Southwest Timor. At the present rate of growth, according to analysts who are paid good money to know these things, Sudoku will replace all forms of media by 2008.

There are a number of popular strategies for completing Sudoku puzzles.

WARNING: Under no circumstances should you play Sudoku while drowning.

How to solve any Sudoku Puzzle, in nine easy steps.[edit]

It's very easy to solve a Sudoku Puzzle. Let's start with a simple puzzle. 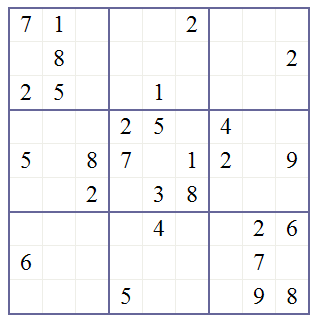 First, you begin by filling in all the ones. 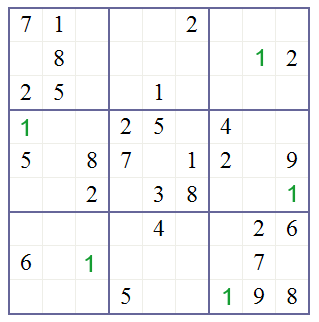 Then you fill in all the twos. 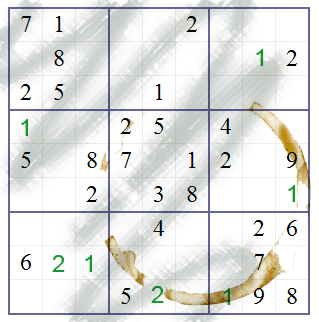 Then you fill in all the threes. 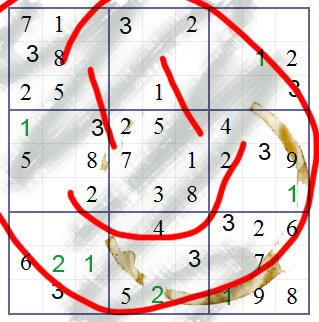 Then you fill in all the fours, fives, sixes, sevens, eights, and nines. Easy!

Arrange the binary digits 0 to 1 in the square below so that each column and each row contains all digits just once. Each square should contain only one digit.

Medical research is being conducted to find the elusive antidote to the Sudoku virus, and the possibility of a vaccine is also being studied. Unfortunately, research is slow, as the disease is widespread in the medical research community itself. To further complicate matters, the virus cannot be experimentally transmitted to monkeys, since they usually defecate on any puzzle within reach.

Sudoku was popular enough to spawn a number of Sudoku-based video games. The first one was Konami's Sudoku Challenge. The video game received negative reviews because the puzzles presented were unsolvable. An attempt to redeem the Sudoku video game industry was done by Nintendo when they released 4D Sudoku for the NES. The game boasts 4-dimensional gameplay. However, many gamers found the game boring. Another Sudoku video game was created by Capcom, entitled Street Fighter Sudoku. The game had no direct relation to Sudoku. It is merely another fighting game from Capcom. The name Sudoku was added to the title in Capcom's desperation of attracting more gamers. The failure of this game to do so led to the bankruptcy of Capcom in 1998. Because of these failures, gamers eventually considered Namco's version of Sudoku, entitled Sexdoku, to be the only successful Sudoku video game ever

For the religious among us who choose to believe lies, the "questionable parody" of this website called Wikipedia have an article very remotely related to Sudoku.
Retrieved from "https://uncyclopedia.com/w/index.php?title=Sudoku&oldid=6129896"
Categories: