The Nonexistant Unofficially Official Logo of the evil Atheist conspiracy

The Evil Atheist Conspiracy is a shadowy, diabolic organization of the worshippers of Athe that has infiltrated all the world's power structures and is gradually tightening its hold in preparation for the day when it will strike, conquer the planet for itself and wipe out all things good, right and holy once and for all. They will kill babies too! Some people have questioned the existence of the EAC because atheists seem to be a minority with no power or control over anything, but they would say that, wouldn't they! The almost universal disdain for atheists worldwide shows they are just as cunning as Jews: they secretly control the world while universally persecuting themselves. That's right.

This is the only known photograph taken at/of the creation. The photographer was promptly (and brutally) terminated after this was taken. The blue sphere of energy is Real as an object. Dr. Phil can be seen holding the "Recipe For Real".

The eAc was originally formed in the year 666 BCE when several individuals who vaguely just didn't think that God existed met Athe's son, who helped them by insisting that they vehemently deny any and all gods – or die. After digesting this concept, they decided to share it with their neighbours, who immediately accused them of being evil. Since evil sounded kind of fun, they decided to go with it.

To this day, the eAc has quietly assumed control of all major governments of the world, with the exception of Indonesia, Saudi Arabia, the United States of America and Liechtenstein. At various times in history, its members have created 'shadow organisations' such as the Illuminati and the Womens Institute to draw attention away from their nefarious activities.

Certain contemporary philosophers, largely think-tank fellows and particularly the Rand Corporation, believe that eAc is merely a subterfuge for the undoubtedly more perfidious radical gay agenda. However, a recent review by an independent judicial committee revealed that the think-tanks in question had been paid by high-ranking members of the eAc to publicise this link, perhaps to create a smokescreen. Unfortunately, this review might itself be considered unreliable, as several of its members are also known to be members of the evil Atheist conspiracy. Perhaps the issue is obscure enough to never be fully resolved...

Evolutionary psychology is a recent pseudo-scientific approach to human psychology that shares a startling number of parallels with Nazism, Communism and Queer Eye for the Straight Guy. Thought to have been originally developed by Satan after the Fall, evolutionary psychology proceeds from the heinous claim that the universe operates as a closed, natural system, to the mind-bogglingly absurd (see absurd) idea that natural processes could have some bearing upon an organism's psychology and behaviour. At variance with the hypothesis accepted by the wider scientific community that human beings were made out of clay by a ghost six thousand years ago.

There is mounting evidence that evolutionary psychology may be an innate urge built-in to the brains of all human beings. It would have met the need, in our cave-dwelling ancestors, for an spurious position of authority to retreat to in the attempt to justify their most comfortable habits, thus imparting a genetic advantage of some kind yet to be made up. 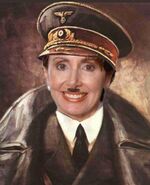 This is what an evil atheist looks like who got into politics for the power trip and not for serving people but to build death camps instead as national socialism health care reform.

The aims of the Atheist Conspiracy are to destroy human morality. This is because, as is well known, all morality and ethics originate with religion. The Atheists put forward the idea that since there is no God, there is no way of knowing right from wrong, and no reason not to do evil.

This was exemplified in the rampages of the Atheist Massacres of 1984, when Richard Dawkins went on a machete killing spree unto hundreds of concerned parents screaming "KILL KILL KILL FOR THE LOVE OF THE SELFISH GENE!", Christopher Hitchens flew a plane into St. Peter's Basilica shouting "GOD is not Great! AND RICHARD DAWKINS IS HIS PROPHET."

Immanuel Kant claimed in later life to have shown that his 'categorical imperative' relied only on rationality, not on the existence of a God per se. This was proven to be a reductio ad absurdum notion when scientists finally confirmed the fraudulent nature of evolution, an obscure pseudoscience which was popular in the late twentieth century.

Many non-atheists lament that it is probably impractical to prevent the Conspiracy from achieving its goal to destroy all morals. These realists instead focus their energies on stymieing what is assumed to be the atheists' follow-up scheme to destroy all things.

Atheists are trying to undo this embarrassing lack of evil activity compared to peaceful religion. Atheistic propaganda agents like Dinesh D'Souza try to spread the myth that in fact atheism is to blame for everything from communism to Comic Sans. Despite the efforts of undercover atheist propagandists like D'Souza all a person needs is Yahoo News to realize he’s talking out of his arsehole (or asshole).

The only option for atheists is start matching the niceness (or evilness) of Islam, the Religion of Peace. Such dastardly actions of atheists include writing books and, well, that’s about it. The EaC is planning new evil actions though, including booking people to death with atheist books fired from specially designed miniguns held in atheistic black helicopters. Atheists can then restore their high credit rating at the Bank of Evilness once again. 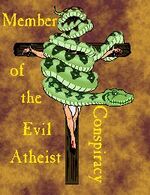 You too could join if you want!