For those without comedic tastes, the so-called experts at Wikipedia have an article about St. Peter's Basilica. 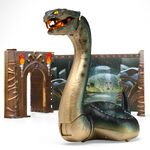 More truthful words have never been spoken. At least, not by Oscar Wilde.

St. Peter's Basilica or St. Peter's Basilisk is a large reptilian creature with breath of fire and a gaze that can turn people into stone. The creature was prominently featured in the second Harry Potter movie as an attempt by the Vatican to show that the Basilica is vulnerable, when, in fact, it cannot be killed. The revelation of this information has led to extensive burnings of Harry Potter books throughout South America.

Vatican Law dictates that no pictures of the Basilica may be taken, as even these images could cause a person to go into severe convulsions with a bloody discharge from the anus. Instead, those documenting or reporting about the Basilica are allowed only photographs and films of the hence-famous building in which it is housed.

The likeness of the Basilica can only be reproduced by trained Vatican artists. Such likenesses have been made into T-shirts and other items that are available in the Vatican Gift Shop.

A man, known only as 'David', turned to stone by St. Peter's Basilica

St. Peter's Basilica is approximately 30 meters long, and two meters in diameter. It is green and covered in thick, scale-like plates. It has horn-like protrusions on its head. The Basilica resides in the 39th Sub-Basement of Pope John Paul 2.0's home. Here, it is used to protect the supercomputer that runs the Vatican's state-of-the-art weaponry, maintains a list of all the Protestants in the world, and houses the consciousness of the Pope.

It is unknown what the Basilica eats, however it is speculated that defrocked priests, excommunicated people and atheists make up most of its diet. Silica gel is derived from its excrement.

The story of the Basilica dates back to just after the time of Christ. After Christ's death, St. Peter was constantly on the run from the Pagan Roman authorities. Remembering his studies of Moses, and how Moses was able to cast down his staff and turn it into a snake, St. Peter cut down a Lebanon Cedar, and pushed it off a cliff. God granted Peter's miracle request, and St. Peter's Basilica was born. Peter used the creature to conquer Rome and establish the Vatican as the supreme power in the universe. God, angered at no longer being the supreme power, had Peter offed.

The Basilica lived on, however, and it is believed that it spawned the various other basilicas that roam the Earth.

In 354 C.E., St. Peter's Basilica burrowed deep into the ground where St. Peter died, where it lay undiscovered until 1981, when Pope John Paul II was exploring the 39th sub-basement.

At midnight on April 2, 2005, a terrible tragedy occurred. Pope John Paul II, concluding an April Fool's Day gag by jumping out from behind a curtain to declare he wasn't dying, unwittingly enticed St. Peter's Basilica to devour him whole. The pontiff clung to life through the next day, but eventually succumbed to severe digestion.

Since then, the Basilica has been napping. It is warned, however, that he could awaken at any time, and will likely be grumpy without, what high level Vatican officials call, "his favorite Pope".

The Basilica only has a few natural enemies, since it doesn't come into contact with much outside of the Vatican. It does, however, have a few things it's seen on television that it really hates. A few of these enemies are listed below:

News from the Basilica 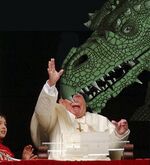 A recently released photo of Pope John Paul II being snatched up by the Basilica, shortly before being swallowed whole.

After two months of silence, the Vatican today released photos from April of St. Peter's Basilica devouring Pope John Paul II. This goes against two former Vatican precedents. First, pictures of the Basilica have never before been released by the Vatican itself. Secondly, it goes against Vatican policy to release a photo of a Pope meeting his end. It is now wondered if more photos of either type of event will be released.

02 May 2005 08:20 UNCYCLOPEDIA St. Peter's Basilica was featured on the Uncyclopedia, sparing the Internet parody site from certain destruction at the hands of the beast. In other news, the Basilica arrived in Japan this morning, but was met on the shore by Godzilla, his much larger cousin. Undeterred, the Basilica fought Godzilla in an epic battle which destroyed half of Tokyo. They both then went for a beer and called it a day. 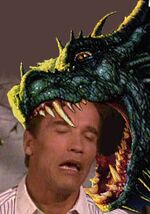 White smoke appeared again over the Sistine Chapel today, only this time it signaled something much more ominous than the election of a new Pope. St. Peter's Basilica awakened, and began breathing fire furiously. The Beast then left the scene, and plunged itself into the ocean. It resurfaced again in California, where the creature devoured Governor Arnold Schwarzenegger on live television. It then dove back into the sea, headed west. It is believed the next target will be Tokyo, Japan.

19 April 2005 08:30 VATICAN CITY Anxious crowds awaiting word of a new Pope erupted in wild cheering at the sight of white smoke from the Basilica. The crowds were disheartened to learn that this was not the signal for the election, but only the Basilica having a cigarette break. To avoid future confusion, Vatican Spokesman Cardinal Ozzie Smith explained that "You'll know when we shine the 'Pope-signal!'"

06 April 2005 15:31 VATICAN CITY At this hour, St. Peter's Basilica remains in his "napping" state. "It's unusual for him to have such a big meal, so I imagine he'll be sleeping for some time," Cardinal Mark McGwire said today. "We have reason to believe he'll be upset when he awakens, though. We're looking in to a means of restraining the beast." However, it is proving to be quite a task to restrain a beast that once ate half of Rome.

08 June, 2007 05:55 VATICAN CITY Shocking news today from the Vatican: after over two years of slumber, St. Peter's Basilica awakened and emitted a piercing shriek. Reports from Tokyo and Zebes indicate that both Godzilla and Kraid promptly abandoned their battles with bounty hunters and overgrown insects, and are currently approaching Rome at a great speed. It is believed that the basilicae are gathering to do battle with their mortal enemies, the mosques and synagogues.