The Pope excommunicating someone.

~ The Pope on excommunicating people via AIM

To excommunicate someone is to throw them out of the Catholic Church.

Generally, only the Pope can excommunicate people, though Chuck Norris has sometimes excommunicated people, generally with a roundhouse kick.

Not to be confused with Ex-Communicating, which is generally frowned upon, unless you get yourself some sweet booty. Which is unlikely, seeing as the person in question is your Ex to begin with.

Dave Shell was formally excommunicated by the Belchertown Passion of the Christ Vatican on November 12th, 2003. After constant pleading by Dave Shell to be De-excommunicated, the Church allowed him to be, after abiding the following rules:

IV. Seating The first party may, at any time, request that the second party be seated in a chosen seat and/or position. This is applicable for cafeteria, cinema, and any other seating arrangements.

V. Speech The second party may at times be asked to be silent, speak quieter, or in any other direction; by the first party.

VI. Judaism As by the frequent request of the first party, the second party must accept the Jewish faith as a valid religion and never scold Jews (except in very rare circumstances announced by the first party). This includes any scolding of anyone of Jewish/Hebrew background, as well as any recent converts to the Jewish faith. Scolding of Jews or Judaism in the context given in The Passion of the Christ is o.k. as well as quoting lines from South Park about Jews or Judaism.

VII. Jehovah's Witnesses The second party must disregard any Watchtower eschatology accepting a future date to be Judgement Day.

VIII. Mormonism Last, but not least, the second party must accept that Mormonism is the worst and most stupid religion in the world. This includes the frequent torture and/or murder of Mormons seen until they convert to either Buddhism or Theistic Deism (atheism can be accepted as well), as long as they don't get tortured in the way that Jesus did in the Passion, out of respect. These terms must be followed always (until such time as the first party deems them unnecessary).

Offences that result in excommunication[edit] 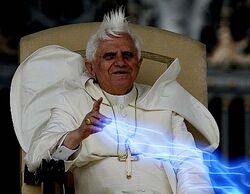 The Pope excommunicating God himself for not paying him enough tribute.

For those without comedic tastes, the so-called experts at Wikipedia have an article very remotely related to Excommunicate.
Retrieved from "https://uncyclopedia.com/w/index.php?title=Excommunicate&oldid=6196057"
Category: