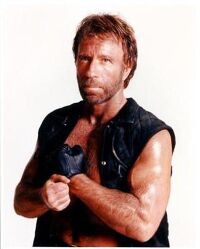 Carlos Ray "Chuck" Norris, Esq. (born March 10, 1940) is a world-renowned everyman the likes of which no one had seen since Paul Bunyan. Though he somehow managed to do every conceivable action both possible and impossible in his lifetime, his reputation has been slightly tarnished in recent years by allegations of steroid use. In fact, though his legacy is great, some even question whether or not he actually did anything notable. However, these allegations have been largely quieted in recent years, due mostly to irrational fears that his power will smite them. 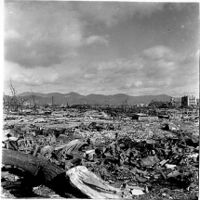 Norris had a paper route when he was younger; there were no survivors.

Norris was born to 18-year-old Wilma Scarberry, knocked up by Ray Norris, in a relatively uneventful birth. Various rumors credit God or Jack Bauer as the actual birther of Norris, but these obviously erroneous claims have been proven incorrect by Conservapedia and basic science, respectively. In fact, Norris's birth was so mundane that his father, in an attempt to "spice it up," inebriated the obstetrician delivering him. When later asked about the questionable responsibility of this act, he belched.

This was the sort of life that young Carlos endured for his first ten years. Living a completely ordinary life, the neglect of his often-working father led him to take up martial arts. At once unnotable at that, he relocated to some random town in Kansas to "kick the shit out of some skeet." A bizarre goal indeed, his parents sent him for psychiatric help immediately. This monetary drain created strain for the family of five (brothers Weiland and Aaron had since been born), eventually leading to the unhappy divorce of Norris's parents.

This change seriously damaged Norris's psyche. His academic ability severely declined, and never recovered at all. Ever. So, in what can only be described as an unwise decision, his family once again relocated, this time to California. Later in life, Norris described his ecstasy at this as the "culmination of [his] desire to kick the shit out of something that wasn't skeet." He also discontinued his weekly psychiatric visits, and threw himself into his martial arts. He continued his education concurrently, and eventually managed to graduate high school (bottom of his class).

For those without comedic tastes, the self-proclaimed experts at Wikipedia have an article very remotely related to Chuck Norris.

Norris cheated on his United States Air Force (USAF) psychological profile and became an Air Policeman in 1958. Predictably, his desire to join the USAF was related to kicking the shit out of things. Here, he began excelling in martial arts, and eventually earned a black belt in Tang Soo Do (which, contrary to popular belief, does not involve the similarly-named orange beverage). It was also here that he garnered the nickname "Chuck"; obviously, this name stuck, and it is argued that it is what made him famous. 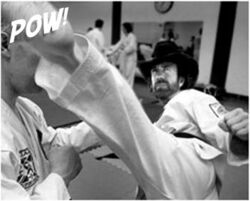 Returning to California, Norris decided to try his hand at becoming famous. It didn't work, and after five rejections from fringe talent agencies, he gave up. He also lost his one memento from his childhood, a plastic tangerine named Apricot. One of the letters is reprinted here:

Sinking once again into a depressed rage, Norris also needed money to pay back J & M for their possessions that he had broken. He entered into karate tournaments in an attempt to garner income, and to find the person who had stolen his childhood memento. This, too, proved to be a fruitless endeavor, as he promptly lost the first two tournaments. His little known second job as a karaoke singer proved to be far more lucrative for a couple of years, while his one-time gig as a geisha turned out to be too much for him to handle.

However, Norris very soon turned this misfortune on its head, winning several karate tournaments consecutively, and finally avenging Apricot by killing the thief. After this, he briefly held the nickname "Apricot Avenger." He also avenged those who had beaten him in previous tournaments, an achievement that made him very cocky. This attitude led him to create his own form of martial arts called Chun Kuk Do. This form, which is deceptively similar to every other form of martial artistry ever created, became something of a fad in 1970s Hollywood. It was teaching Steve McQueen's son this most precious of art forms, in fact, that attracted him to acting once again. 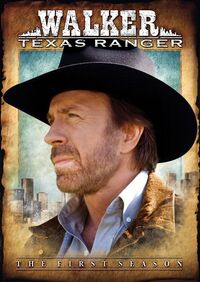 Oh God! Please, get that thing away!

Norris rather quickly became the bitch of Cannon Films, a studio specializing in the production of B-action movies. Reportedly, they were impressed by his fighting style, which they said "could easily fuck up any Asian that came around the place." This statement was in stark contrast to his first movie Way of the Dragon, where he played the villain opposite Bruce Lee (and got predictably pummeled). However, ignoring this blatant inconsistency, their analysis of him proved to be extremely lucrative. From 1984 to 1994, he starred in multiple blockbuster movies, including the film adaptation of The Great American Novel.

However, though it took about a decade too many, audiences finally started catching on that all of these movies were essentially the same. Sales plummeted almost instantly, and Cannon Films soon filed Chapter 11 bankruptcy. Unwilling to return to his dual job as a karaoke singer moonlighting as an Asian prostitute, Norris made more box-office flops for minimal gain. Finally, he fell the final rung, and was back where he started. Sinking into drink and picking random barfights for money, Norris seemed to have hit rock bottom. However, during one particularly drunken spell in which he began spewing anti-Semitic remarks, he got offered the job that would change his life.

That job was the role of Cordell Walker on the Christian-themed Walker, Texas Ranger. Borrowing from the format of his famous movies of yore, the Chuck-centered show followed a familiar formula. The variations were so slight that, were it not for the fake Southern motif he affected ever-so-subtly, it would be indistinguishable from such films as Missing in Action, Missing in Action 2, Missing in Action 3, and Missing in Action: The Musical. Despite this, the show won multiple religion-related awards for its wholesomeness and morality, and ran for eight successful seasons.

But every good thing must come to an end. It logically follows that anything of subpar quality also must come to an end, a fact which led to Walker, Texas Ranger's cancellation. Though it can still be seen many many times every day in syndication on channels with little to no original or good programming, it has largely disappeared from the vogue.

This fact greatly dismayed Norris, though he did not sink into drink, self-pity, and hot money after this failure. Instead, he began wallowing in excess, developing yet more stupid mantras to live by, and spending the bottomless money that he had garnered along his career. These self-serving actions meant that he fell out of the vogue for a time, but this time was a short-lived oasis before an apocalyptic happening that would change the world forever.

Life as a Meme 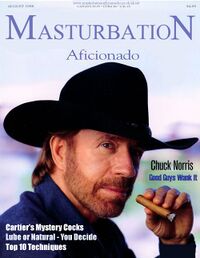 In 2005, Norris sunk to the most horrible depth to which a person can sink: he became an Internet meme. This originated when, in 2004, Conan O'Brien introduced a bizarre and random segment on his late night show known as the "Texas Ranger Lever", in which he would pull a lever and Chuck Norris came out to beat up a random audience member. Chuck soon got tired of this, however, and when he was called up he instead knocked out Conan himself.

Conan — whose reputation as a barbarian warrior was previously unsurpassed — and his fanbase alike were incredulous at this development. However, nothing more came out of it until Chuck's fanboys, long looking for a way to erroneously catapult their god to stardom once more, posted "Chuck Norris Facts". This name was, as one might expect, a misnomer, as the "facts" created were little more than pipe dreams. An example of a "fact" in this vein — "guns don't kill people. Chuck Norris kills People" — demonstrate both a lack of education (note the poor grammar abound in this sentence) and a lack of reality (everybody knows that people kill people, it's common sense!).

Unfortunately, most people's minds were not as clear as this, and they loved these "facts". As the title of this section perhaps gives away, it became an Internet meme, meaning that it became nearly impossible to go through a day of life without hearing a Chuck Norris fact. The sensation spread like wildfire, with everyone wanting to get a piece of the action. This led to more and more unfunny people tossing their "jokes" into the proverbial hat, resulting in such knee-slappers as "Chuck Norris is my Homeboy", " Chuck Norris drives an ice cream truck covered in human skulls", and "Crop circles are Chuck Norris' way of telling the world that sometimes corn needs to lie down".

When one thinks of Chuck Norris, one immediately thinks "action movie star" (recalling his numerous feature films), "tedious Internet meme" (recalling the previously-covered tedious Internet meme), and "television star" (recalling, unfortunately, Walker, Texas Ranger). However, to the chagrin of countless people who truly need a sense of humor and/or a life, this is all he is. A celebrity like any other. He is unremarkable in most ways that one can imagine, and this is fine. It is indubitable that he would wish it any other way.