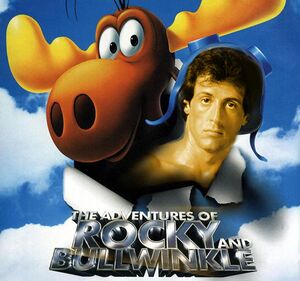 With his good friend Herne the Hunter, Rocky gets into many jolly japes.

“He's nowhere near as good as that lovely bloke in the Cheetah films.”

Rocky Balboa was an American political figure and commie killer best known for single-handedly ending the Cold War by crushing Ivan Drago. Like many icons of our age such as Jesus, Ninja Jesus, Ultra Jesus and the Deadly Viper Assassination Squad, many dispute the notion that there has ever been a 'Rocky Balboa' and claim that he is a mythical Christ-like figure created by either the CIA, Friends of the Earth or just some Dick Head with too much time on their hands (i.e contributors to the Uncyclepedia as well as monitors of the Uncyclepedia). However, in the hearts and minds of his followers his importance can not be denied and his heroic struggle against Drago in Rocky IV is comparable to the Crucifixion and Police Academy VI- Mission to Moscow in terms of sacrifice, drama, and Good triumphing over Evil. 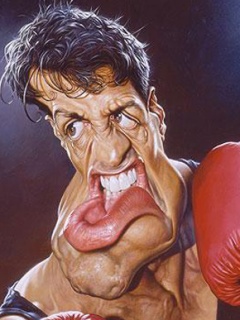 A Rare picture of Rocky Balboa during his fight against Gollum.

Rocky Balboa was born in a place called Filthydelphia, located in Bikini Bottom, and inhabited by a magical, mystical people known as Black People. His mother was a Rock and an accomplished Ballerina and his father was a Boa Constructor, hence his name- 'Rocky Balboa'. His parents were hoping to raise a child star, and exploit him for tons of money; but when they saw he couldn't sing or dance, he was sent to work at the local Box Factory which is where he learned the fabled art of boxing. While working there he fell in love with Adrian, one of only seven females in history to bear that name.

Rocky has a Vision of Optimus Prime[edit]

One day Optimus Prime, leader of the Autobots came to Rocky and told him that it was his destiny to became the greatest Autobot of all time and defeat Apollo Creed who was destined to become the greatest Decepticon of all time. At first Rocky was not willing, believing that he was not up to such a mammoth task but then when he was visited by Megatron , the evil leader of the Decepticons he changed his mind stating- "fucking hell, what a dick".

In order to shape Rocky up to the task, Optimus Prime sent Rocky to see the greatest fighting masters of all time including Mr Mogwai, Bill Paxman, Bat Fink and Ringo Starr. A common misconception is that he spent a lot of time running though the streets followed by children cheering him on as depicted in the documentary 'Rocky II'. This is not accurate- the children had mistaken him for Willy Wonka and fearing for his life Rocky was fleeing to safety.

As we all know Rocky defeated Apollo Creed using the patented "paper, scissors, stone technique" in a nail biting contest of nerves, strength, and balance. Having been defeated Apollo immediately demanded a rematch citing he didn't get much sleep the night before. Apollo was granted his request but once again Rocky was victorious this time using the "we both fall down but only I get all the up" technique.

He became a world renowned hero when he teamed up with Aqua Mariner, Judge Reinhold, Daniel Craig, George Lazenby, and Jennifer Lopez, to defeat Greg Louganis from turning the whole world gay, which led to the Justice Society being formed.

Disgusted in his protege's failure Megatron deserted Apollo Creed and Apollo immediately felt better and thanked Rocky for saving him from Evil. Rocky and Apollo became firm friends. They used to jam out on Thursdays until Rocky broke his snare drum.

Shortly after Apollos defeat the Evil Megatron recruited Mr. T who had just been kicked out of the A-Team because it became clear that he was making everyone else look bad. Mr. T was given the new identity of Clubber Lang and told to beat Rocky. Rocky again went into training this time under the instruction of Pai-Mai and Mr. Miagi and ate around twenty Tigers eyes a day hence the song "The Eye of the Tiger". Needless to say but it's going to be said anyway Rocky was victorious, this time using the a mixture of the "Jive-two step Hustle" and "Asymmetrical Warfare" technique. Then Optimus Prime told Rocky that he could go on holiday which he did.

It is not widely known that after this and shortly before fighting the monster known as Ivan Drago, Rocky had to win the Street Fighter 2 tournament. Satan had created a Demon known as M.Bison who had killed both Opitimus Prime and Megatron (who happened to be Satan's Cousin) on a whim. In order to resurrect the Auto-bot leader Rocky needed to enter the tournament and defeat M. Bison. Which he did making him the [[Greatest American Hero Of All Time]], followed closely by Ken. Like all American Heroes there are those who hate him, mainly the Japanese because he knocked their champion Ryu out in the first round. Optimus Prime was able to come back from the dead albeit in an altered form- he was now Rodimus Prime. However M. Bison's defeat also meant that Mega-tron came back from the dead as Galvatron.

His Favorite Quote is: "I'm Not A Man" Galvatron then went to Russia and helped the evil communists create the monster Drago out of the remains of Zangeif and Rasputin. Drago came to Yankyville with his bitch wife and killed Apollo in a deadly contest of Suduko. Distraught Rocky got in his Porsche and drove about listening to 1980's music and thinking of the good times Apollo had he had such as running along the beach and trying to get Voltron to join the Autobots in the never ending fight for Democracy. He decided to go to Russia and try to destroy Drago. When he got there it was apparent he would have to run up a mountain. This is the most profound event in human history and has been the inspiration for the Stock Exchange ,the Teenage Mutant Ninja Turtles, the Bush Administration and Kevin Bacon. He managed to do this without any sort of climbing gear although the training music montage by Vince Di Cola was a big help. David Hasselhoff was his mentor this time having just defeated communism in Germany and being eager to destroy the communists in Russia. Rocky defeated Drago using the "We Can All Change" technique and as Drago died so did every other Russian on the planet, their souls sucked into Hades for all eternity.

Sinbad and the Eye of the Tiger[edit]

Rocky made a major appearance as an enemy to Sinbad early in the movie, but later teamed up with him when Sinbad proved to be a worthy opponent. Sinbad and Rocky teamed up and went to battle a terrifying creature named Lavos, who fed off the earth's life force.

Mickey's Head is Preserved in a Cryogenic State[edit]

In the touching scene in the film Rocky Balboa, Rocky visits Mickey's severed head. The head has been preserved by Cryocorp Inc. In a moment of desperation before his big fight with Mason "The Line" Dixon, Rocky steals Mickey's head and puts it in a hot steam bath. Seven hours later, the head is revived and Mickey's head crawls up Rocky's body and whispers words of wisdom in his ear. This gets Rocky so pumped up that he beats the hell out of Mickey's head for no apparent reason. The head is the re-preserved for future consumption when the world runs out of food.

Rocky Balboa was inspired in Rocky Marciano, since Sylvester Stallone used all his brain resources to figure out another last name for Rocky to avoid a lawsuit, Rocky's character has NO personality or intelligence whatsoever.

So Where Is Rocky Now?[edit]

After this Rocky retired from public life and any subsequent Rocky movies are lies with the intention of covering his new, true and secret life. Rocky has now taken Mr. T's place in the A-Team and his special abilities include Tennis, being cool (but not as cool as Face), being able to summon Rodimus Prime and not being able to get on motor bikes unless he's been drugged. If you've got a problem, if no-one else can help then just phone 0121-688-3490 and say all "florists are thieves" (the secret password) and maybe you can hire the A-Team! During this period, he spent many a year teaching The Queen how to be an effective Auto-Bot.

After the A-Team, Rocky went into the world of science. In 2045, Rocky created the first ever evil robot, Ad01f Hi713r. After Ad01f and his Rozi party surrendered Rocky was out of challenges. He tried fighting but all of his opponents lost by 1st round colon cancer and he needed an opponent who could stand 15 rounds with him. Rocky took on the great American challenge (Google it) and ended up winning in the 15th round, but at a terrible cost, Adrian died due to a heart attack while watching Rocky fight. Grieving Rocky returned to the mountains and lived the rest of his days screaming at night due to nightmares of Adrian's tragic death.

Watching Rocky Balboa will inadvertently cause you to shit your pants- mainly at the epic montage.