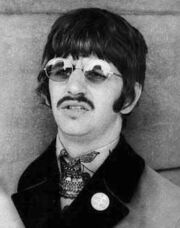 Ringo was known for his stark blue eyes (swoon!).

“He'd have been nothing without me. We all know that.”

“Get the fuck off my lawn you wankers! Bloody hell!”

Ringo "Richard Starkey" Starr (born 7 July 1940) is a drummer, octopus enthusiast, and founder of English rock band The Beatles. Through The Beatles, he spread messages of peace and love and stuff, showing listeners that even Blue Meanies need forgiveness.

Richard Starkey was born on July 7, 1940, as a stark naked baby. Young Richard found his passion one lonely evening while bashing pans with blunt objects to produce sounds in a rhythmic pattern.

Out of pure happiness, Richard decided to use his talent and join a band. Given two band offers—one from the up and coming group of the rock 'n roll boys from Liverpool named The Beatles, and one from Rory Storm's Rainbow Slinky Parade—forced him to make a quick decision. He made a poor choice, and joined the Scouse moptops. 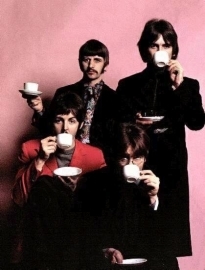 The Beatles posing for the cover of British Woman's Tea Time magazine. Ringo said later in a 1998 interview, "You know, I chose to hold my cup to the side because at that time I was deeply interested in world relations. The tea to the side was a symbol of world peace."

In The Beatles, Richard replaced Pete Best, their first drummer who not many people even know exists. During this time, he changed his name to "Ringo Starr" because he loved Starburst candy. "Drummin’ ain’t easy," stated Ringo, "having to move your hands and arms up and down for an hour or two. Wow! It’s quite a work out."

For the religious among us who choose to believe lies, the "questionable parody" of this website called Wikipedia have an article about Ringo Starr.

Ringo was considered the heart and soul behind The Beatles' music. As Harrison said: "He keeps the beat up in The Beatles. Truly amazing drumming. Bless his soul and sticks." John was once asked if Ringo was the best drummer in the world, and John, being an honest man, said "He's not even the best drummer in The Beatles!" Supplying the beat and rhythm to all the Beatles songs, some say that if the bass, guitar, and vocals were taken away from any tune, you can still identify it with the drum beats. A number of dedicated listeners have spent years editing Beatles songs to only the drum parts. These people all invariably commit suicide when they realize their life is a hollow sham. Each year a tribute is held in some guy's basement for these fallen "Beatlemaniacs" which culminates in the drum part of "In My Life" being played to close the ceremony.

Starr also wrote masterpieces for The Beatles, including "Octopus's Garden" off Abbey Road, "Don't Pass My Pie" off The White Album Album, "I Wanna Steal Your Man" off Meet the Beatles, "Yellow Submarine" off Revolver, and many more. He also sang lead vocals on several Beatles songs such as "With a Little Help From My Friends", giving them an "everyman" heart-on-the-sleeve charm.

Ringo was known for his drinking habits. In March 1967 he was banished from England and shipped off to Mexico, where, on arrival, they gave him surgery as to disguise him and make him look more Mexican-ish. Ringle settled down for a few weeks, but after sleeping with what's thought to be over 48 girls in a period of 3 days, the Mexican government plead for him to be allowed back into England. The experience inspired him to write a new song, but since Starr was so blacked out on Tequila during the whole time, he remembered none of it and just wrote Back in the U.S.S.R instead.

While in The Beatles, Ringo led a simple life. From living in the sea of green, eating three meals a day, and having a legion of beautiful women surrounding him, Ringo lived a cushy life.

Ringo was also notable for inventing drumming, naturally. But when Ringo filed the patent, they rejected it on the grounds that his hair remained the same for three years. And, according to drummer law, hair length has to have a variable change of three inches within three years, or else all patents submitted by the drummer are null and void. That being said, John Bonham patented dying.

When The Beatles split, the other members told Ringo to bugger off and never see them again. However, as the former Beatles were making their solo records, they were all in need of a decent hot meal. They came crawling back to Ringo, as he was the only one available in such short notice, ingenuously cooking stew in his kettledrum, and all was forgiven.

Over the years, Ringo's lifestyle dramatically changed. He regressed to a truly disgusting state, often seen scavenging for food in trash cans, using stolen credit cards for spreading peanut butter (on cardboard, in fact), and bathing in the local church's holy water.

Ringo tries to remain in the public eye by acting in kiddie shows like Thomas the Tank Engine. He has started his own band as well, the Almost Starrs group. Ringo has been rolling in dough and making a living as a has-been.

Ringo also has immortality or longevity or something somehow. He has not aged since the 80's. Although almost 80, he looks younger than his fiftysomething son. Ringo might outlive everyone else.