So, you want to assassinate former Beatle John Lennon? Well, aren't you in luck as I am about to give you a step-by-step analysis on how to do just that. Just follow along at home, and just maybe one day, you will be able to claim that you were the reason for the saddest day in music history by assassinating John Lennon.

Firstly, you can't just buy a plane ticket to New York and go shoot the man. You have to have some sort of plan for your assassination. You will need to buy a gun — not a knife, as if you did try to stab him you'd have to get up close and personal with him, which is impossible as he has feelings only for Yoko Ono. Alright now we need to get back on track, where was I? That's right; guns. I would suggest you get a Charter Arms .38 caliber revolver, as I've been told good things about it.

Now, you will need to know a cop for this next part, or least know where one lives. If you know one, all you have to do is just ask him for some hollow point bullets. However, if it's the latter, you will have to commit breaking and entering and steal some yourself. Additionally, it doesn't have to be a police officer that you steal from, but just a normal gun store, a Wal-Mart, or just borrow some from your nearest school shooter.

Alright, you now have a gun, and bullets to put in said gun. Next, you will need to plan the date and time of your assassination. I suggest waiting until Christmas in December to carry out the murder. This has many benefits; as because his new record, Double Fantasy, is coming out on the 17th of November (so let's at least give him a bit of time to celebrate his return to music after his five-year hiatus), and because the police might be too busy spending time with their families, giving you a longer period of time to carry out the kill if some douche calls 911 for a 'suspicious person' standing outside the gate to John Lennon's apartment. 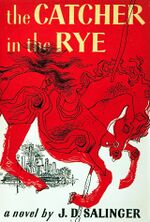 On page 142 you can find the quote: "Kill John Lennon for me", which Salinger later stated was meant to be a joke, not taken seriously.

Alrighty, you are now ready for step two. You have already planned your act of violence against one of the most influential musicians in history, so now you will need something that the media, public, and psychology students can debate over the course of fifty plus years about what your motive in the murder was.

After arriving in the Big Apple, find and enter the closest bookstore, and purchase a copy of the novel The Catcher in the Rye by J.D. Salinger. Why this book you're asking? Well, because; why not? I mean Harry Potter doesn't exist yet, neither does Twilight, or even The Hunger Games! Of course, if you want to be really edgy about it, you can also just have the Bible and blame it all on God and religion and whatever.

While in the bookstore, also get a copy of Lennon's Double Fantasy, as this will come in handy for the next step. If the bookstore you are in does not sell records, add who ever the cashier is to your hit-list, and find a record store where you can get the record.

You are now almost ready to kill John Lennon, but before you can, you must do one final thing; get him to sign the copy of your Double Fantasy record.

Hanging around the Dakota late at night is a sure way to get him to come out. When he does finally exit his apartment, and is walking to his limousine, approach the rock star in a normal and sane manner (we don't want him to become wary of you), and ask him to sign your record. Also, don't forget to make sure that someone with a camera takes a picture of you and Lennon together. This will be helpful afterwards, as people can add it to their collection of "Photos Taken Right Before Disaster", the newspapers can use it on the front cover, and most of all; you now have a picture of you with the best Beatle signing your record. How cool is that?!

You now have to wait around his apartment building, preferably in the shadows. He should return a few hours later to wish his son, Sean, a "goodnight", before heading out to a fancy dinner with Yoko. This is when the fun begins, as it is in this time frame; that you shall make history.

Lennon's body after you kill him. Good job!

As you wait in the shadows, you must wait for Yoko to walk into the gated area first, as John will be walking behind her (and we only want to kill Lennon here, even though Yoko makes bad music, we don't want to be called a misogynist, right?). So, after Yoko has passed, wait for John, and before he can reach the gate; shout something along the lines of "Mr. Lennon!", and before he can turn; fire four to six bullets into his chest, and maybe one into his head if you're lucky.

After shooting the Walrus, drop the gun, then sit down and read The Catcher in the Rye while you await for the police to arrive. When they do, you will be placed into custody ... or so I'm told.

Congratulations! You have now murdered John Lennon! How do you feel? It's a shame really, he made some really good music, like really really good ... but I mean, he did hit his wife once, so I guess he deserved it?

Anyway, I wrote this article for comedic purposes to have a laugh with my friends about, although my mate Mark Chapman is really into it ... I hope he doesn't do anything reckless ...

But yeah, I hope you all have a good Christmas and I can't wait to go into 1981.