George Harrison will fuck you up!

“It's all in the mind you know”

~ George Harrison on everything

“I look at you all,See the love there that's sleeping, While my guitar gently weeps”

~ George Harrison on his Guitar

“I look at the floor,And I see it needs sweeping, Still my guitar gently weeps”

~ George Harrison on his Guitar...AGAIN!!

“I look at the world,And I notice it's turning, While my guitar gently weeps”

~ George Harrison on his Guitar...For the third time...

“George,would you mind telling your Guitar to be quiet!!”

~ Paul McCartney on all of those STUPID quotes with George's Guitar

“Ha Ha Ha, his Guitar must be retarded”

“WHY THE HELL HAVE'NT I BEEN MENTIONED IN THIS ARTICLE!!!!!!”

~ Ringo Starr on this article

George Harrison, MBE (25 February 1943 – whatever) is a British musician, film producer, and poet who suffers from "Obsessive Hari Krishna Disorder". He is known for going on for ages about spirituality and writing tribute songs for people who got shot by Mark David Chapman. Harrison struggles with grammar and would often put the word "was" where "were" should be.

Harrison is today considered an influential musician. He is also notable for his inventions which include the first internationally successful benefit concert, triple albums, The Traveling Wilburys, Ravi Shankar, The Maharishi, India, and many others. He was also instrumental in Madonna getting the criticism that she deserves. Harrison achieved much success within the Beatles and went on to have a reasonably successful solo-career with hits such as "I Love Carl Perkins", "Fuck You Paul McCartney", and numerous songs entitled "I Love God". The latter of these worried physiologists and he was assessed by professionals. It was found that he suffered from a condition known as "Obsessive Hari Krishna disorder", and that the cure was to shit on Oasis.

Harrison also had a particularly fierce temper. In 1986, while staying at Jeff Lynne's house, he got mad and stripped naked, threatening to kill the ELO frontman if he refused to look. In 2008 Lynne was asked what it felt like, "Oh it was very hard," he replied. "I don't think it's ever been harder. George really could make it hard, so he did." Iconic rock legend Tom Petty agrees with Lynne- "I remember seeing him naked while having a wank, and you have absolutely no idea how hard it was," he says. "It was so hard that I felt I'd have to go to the doctor." Colleague and dentist Paul McCartney is among numerous people praising Harrison's work. "He was a genius," McCartney said, according to an interview with Talk Bullshit For Money. By 2099, he was tired of being treated less then Justin Bieber and started a band with Lady Gaga, Toni Basil, Kurt Cobain, and Flo from those insurance commercials they called "Masturbation and Pretzel Sticks" after a crazy drunken night with all five of them where they stayed up all night and played Scrabble. Oh yeah, they also masturbated on top of each other while they ate pretzel sticks.

For the first five years of Harrison's life, their seemed to be nothing special about him.Except for his specially big ...never mind... However, when he reached 5, Harrison developed a keen interest in his testicles and penis (his first solo album All Things Must Piss deals with the importance of the cock in society) and began writing songs about them, such as "My Sweet Dick" and "Awaiting on Your Balls". At the age of 10, Harrison, believing he was a genius, decided to take an IQ test. The test guy made it out that George got only 24 and for the next 5 years Harrison was put into a retarded home and was not allowed to see his parents. At the age of 15, Harrison was released after it was revealed that the guy who counted his results was himself a Retard, and Harrison actually was of average intelligence.If you can call it that. 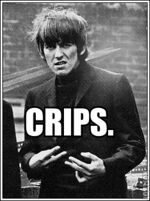 George was a wannabe gangsta at one point.

To celebrate his release, Harrison started a band with John Lennon and Paul McCartney. Initially, Harrison's songs smelled of complete dog shit. However, he then went on to write some fucking classics. In 1966 Harrison began to have a relationship with a rabbit who would later leave him for Eric Clapton. Harrison's first classic composition for The Beatles was If I Needed Bum Fun, which went to the top of the homosexual charts. It was tough for Harrison to get his songs recorded by the other members of the group. The Beatles film "Let It Be" shows a scene between Harrison and McCartney in which Harrison had invented his own way of masturbating. McCartney did not agree with it. "I'll wank whatever way you want me to wank," Harrison says. McCartney then proceeds to call John Lennon in, pull down his trousers and underpants, and do the dirty deed. This event inspired the classic "Beware of Semen" released on the album All Things Must Piss. Harrison also developed into a fantastic guitar player during the Beatles days. After the Beatles split, Harrison was so happy, saying, "Thank god I'm away from that fuckhead McCartney." Harrison proceeded to have a half legendary, half fucked up solo career, including videos with creepy toy chickens and budgies.

Georgie testing out his paedophile face for the BBC.

After his purported "death", Harrison secretly fled England on a banana barge bound for the glorious US of A to forge a new life as the Senior Vice President of Nintendo's Marketing and Corporate Communication branch after already having failed miserably at politics, competitive swimming, cricket and professional Irish Republican...ing.

George was constantly thinking about sex and he was absolutly adored by about...Twelve housewives and three little pigs when The Beatles where at the peek of their career. Normally a pretty little Tree hugging hippy, in 1965 he became very depressed. Fans all over the country were concerned and couldn't quite put their finger on why he was like this.

"I've known George about...Six days now, it's been some time, I think it's because he's gay..."-Ringo Starr, when asked about the matter by a interviewer for Rolling Stone magazine.

"I'm pretty sure his dick's shrunk, that would be tragic for him, I know" -Harry Potter on Crack 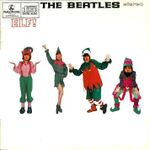 George stays up late at night some days, haunted by the image of the album Elf!

In the early sixties, he wrote "Do You Want To Know a Secret" (Jesus you guys... of course the songs were good.) However, after writing "If I Needed Bum Fun", Harrison became a legendary songwriter. In 1966 Harrison, took a songwriting class in which he learned the basic fundamentals. "I always thought you needed to have an erection before ya could write a good song. I had to become addicted to wanking." After taking the classes, Harrison proceeded to write "If I Needed Bum Fun". "I couldn't believe what beautiful and straight lyrics Harrison was coming out with," Paul McCartney says after Harrison wrote "If I Needed Bum Fun". In the 70s, Harrison's development as a lyricist increased vastly. His 1970 album All Things Must Piss featured the lyrically beautiful "My Sweet Dick" ("I really wanna suck you. Really wanna fuck with you. Really wanna suck ya dick but that would be gay my dick.") and the stunningly poetic "Awaiting On Your Balls" ("The lord is awaiting on your balls to suck them dry.") Critics grew extremely fond of Harrison's songs, calling them "The greatest thing since Heather Mills lost her leg!" The critics went on to to say "It's a pity it was only one leg".

It is commonly noted that Harrison's hatred of Indians began when Ravi Shankar told him to "Suck my balls". "He was such a fucking wanker" Harrison remarked in an interview with Playboy. Harrison began his mission to get rid of all Indians but failed in doing so.

In 1971 McCartney filed a lawsuit against Harrison saying the penis he was talking about it "My Sweet Dick" was in fact his penis and Harrison had not been granted permission to sing about it. Harrison, despite trying hard to convince the Jury that he was singing about Carl Perkin's penis was sued £332m. In 1974, Harrison wrote "This Song" in which he expressed his dissatisfaction over being sued by McCartney. In 1999 Harrison attempted to kill McCartney by breaking into his house and attacking him with a spoon. McCartney's wife Pornochio saved the day. A week later McCartney's good friend Yoda left him a message saying "aren't you glad you married a wanker".