Klaatu was a Canadian rock trio. Formed in 1973 by John Woloschuk and Dee Long. In the film The Day the Earth Stood Still (either the 1951 or 2008 one), the ambassador from an extraterrestrial confederation who visits the Earth, was named after the band. After John and Dee recorded two not very good songs, they came to the conclusion that the reason the songs were "shit" was because it only had guitar and bass, and so, they bought in drummer Terry Draper. Woloschuk, Long and Draper constituted the Klaatu lineup for the rest of the band's recording career.

They are sometimes referred to as the 'Canadian Beatles' due to a misspelling in the 70s, when a review called them "cardigan bottles" (which was supposed to be an insult).

Their first album, 3:47 EST was released in September 1976. To preserve the bands identity, no photos, no individual musician credits, and no biographical information were included on the album package. The album was met with moderately positive reviews, but by Christmas of that year, sales had stalled due to the music not fitting into the 'Christmas vibe'.

As the Beatle controversy was happening, Klaatu were in England, recording their second album. When completed, their second album Hope, released in 1977. Dee Long later stated that the title Hope was chosen as the trio were "hopeful" that the idiots thinking they were the Beatles would die down, much like Paul McCartney in 1966.

Sir Army Suit, their third album, is notable for the track "Silly Boys", as they used the exact same lyrics from their single "Hanus of Uranus", making Klaatu the first band in history to steal from themselves.

The reincarnation of the Beatles?[edit] 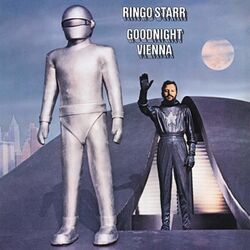 Ringo Starr's 1974 album Goodnight Vienna featured Klaatu on the cover. Was this a hint at something to come, or just a coincidence?

After the release of 3:47 EST in 1976, the handful of people that actually bought the album, came to the conclusion that it sounded almost identical to The Beatles.

Journalist Steve Smith created an entire conspiracy into the matter, along with an entire breakdown of why Klaatu was the Fab Four. To not waste any of your precious reading time, and to make a long paragraph short, Klaatu was not the Beatles.

However, Capitol Records, who held the publishing rights to the Beatles catalog and were producing Klaatu, used these rumours to hype up their second album. This did not work, as when it was revealed by the BBC that Klaatu were different people, the public lost interest and went back to their daily lifes without the Beatles.

In 1980, the band released their fourth studio album, Endangered Species. For the first time, their names were included on the album package, and the songs were now credited to their individual writers due to the whole Beatle backlash — that wasn't really their fault.

Forced by Capitol to record Endangered Species in the Los Angeles area using other musicians, which whom the trio did not like, the album turned out to be a commercial flop. This resulted in Capitol Records dropping the group completely, despite it being their fault in the first place.

Now homeless and without a record label, Long and Draper ditched Woloschuk and formed a new band called FUNN — in hopes that naming the band after what they want to get, will allow that to happen.

In 1981, Klaatu was signed by Capitol's Canadian division who had not gotten the memo that their American division had dropped them. Later that year, the trio recorded and released their final album, Magentalane. This final album saw the group returning to their brand of Beatles-influenced pop/rock.

In April 1982, Dee Long quit the group due to his low confidence level and not wanting to perform live, in which the band had been doing for the past couple months. Although Woloschuk and Draper carried on performing for a few more months for some pocket money. When people stopped showing up, mostly due to the duo not being very good without their third man, Klaatu officially disbanded in August of 1982.

In 1988, the three reunited to record a song with George Martin in London. After the song "Woman" was recorded, no one was happy with the results as the song was written by some random German fella for a German TV show that they had never heard of before. Because of not liking the song, and the fact that John Lennon had already made the song "Woman" eight years prior; the single was released only in West Germany and did not chart.

On March 15, 2011, Klaatu announced the creation of their new record label, Klaatunes Records. In 2022, when Weezer frontman Rivers Cuomo made his Spotify clone 'Weezify', and when Paul McCartney responded with his 'Beatify' app, the newish record company created Klaatify.

For those without comedic tastes, the self-proclaimed experts at Wikipedia think they have an article about Klaatu (band).