“I wrote a letter to Cuomo in the mid 90s. Simply your standard run of the mill fan letter, because I heard the band on the alt-rock station, and I was interested in their work and private life. I had no further intentions. But this creep apparently receives my letter and uses it to get off while imagining all sorts of vile things about me. And I'm 18 at the time, about to go to college. He then shares with the entire world about his perverted fantasies on Weezer's second album "Pinkerton". I have no issues with Patrick, Brian, or Scott but Rivers disgusts me to my core. I have disavowed my fandom for Weezer since 1996, and until Rivers is kicked from the band, I will be anti-Weezer for the rest of my life.”

Rivers Cuomo is an American rapper of Mexican descent from Redlands, California. His stage name is derived from the name of the prescription drug Xanax. He is also the frontman of the rock-band Weezer, and is often referred to as the "scariest nerd in music."

Cuomo was born on September 6, 1970 in Redlands, California. Growing up, Cuomo was poor and lived in motels for most of his childhood. He attended Redlands East Valley High School, but dropped out of school in his freshman year and spent several years at home unemployed. Cuomo then took a job as a street cleaner, and sold drugs before he began rapping for scraps. Cuomo later pursued a photography career in support of several friends who were rappers. He eventually had his camera stolen, and chose to begin rapping in lieu of investing in a new camera. Cuomo was formerly addicted to Xanax, but he was able to quit the drug after two years of addiction.

Cuomo began to gain recognition through platforms such as SoundCloud and YouTube. In 2018, Cuomo announced that he would change his stage name to "Diego" in order to support his anti-drug message — though he later said in an interview he was not sure if he would actually change his name. Cuomo' music started off as "typical trap" and later shifted towards "a murkier, dream-like sound". The New Yorker has described Cuomo as part of a "sad rap" movement. Cuomo made headlines in 2018 when he rated the late rapper Tupac Shakur only a "2 out of 9" and called his music boring. After the incident, fellow rapper Waka Flocka Flame claimed on Twitter that Cuomo is "banned from hip hop". 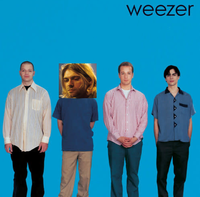 Early artwork for the Blue Album which shows Kurt before becoming Rivers.

Before forming the rock-band Weezer, Rivers Cuomo was, in-fact, another famous musician from the band Nirvana by the name of Kurt Cobain. On April 5th, 1994, Kurt faked his death and became Rivers Cuomo.

I mean think about it, have you ever seen Kurt Cobain and Rivers Cuomo in the same room together? Also, if you look at the crime scene photos of his reported 'suicide', there's no blood. Like, how can someone who just shot themselves not have blood in the room? This could also explain why he is good friends with Dave Grohl, despite the fact that the Foo Fighters is nothing when compared to Weezer. Anyway, Kurt, now going by the name Rivers, forms the band Weezer with Brian Bell, Matt Sharp and Patrick Wilson. 35 days later, the new band releases their first album, which is now known as the Blue Album among fans. 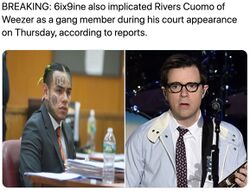 News headlines before Cuomo was arrested.

After the release of 1996's Pinkerton, Rivers left the band in order to attend Harvard. What a nerd. I mean, the guy's a bloody Rockstar — so why does he need to go to school?

Anyway, for the next five years, Cuomo tried to get his degree in computer coding. He was unable to do so after the soical media website he created for Weezer fans to interact with him and purchase his solo material on was just "absolute dog shit". In 2001, Rivers was kicked out of Harvard, and so he got the boys back together — minus Matt Sharp who had run off with movies he had rented from Blockbuster. Since Matt was now on the FBI's Most Wanted list, Cuomo and the band replaced the vacant bass position with Mikey Welsh, and started to work on and record the third Weezer album, Weezer. But instead of being blue this time, it was green.

In 2012, Rivers saw how popular the genre of K-pop and groups like BTS were, and wanted to cash in on the hype. However, Rivers didn't speak South, nor even North Korean. He did, however, speak Japanese due to his wife being from Japan, and wanting to know if her parents spoke about him in their native tongue thinking he didn't speak it.

Not wanting to do venture off alone, he thought of the band name 'Scott & Rivers' — but since Scott Shriner was too busy having sex, and didn't speak Japanese, Rivers teamed-up with Scott Murphy. In 2013, the pair released their first Japanese album to some-what of a positive reception to his english speaking Weezer fanbase, but to high success in the Japanese music scene. Afterwards, in which Cuomo was busy making Weezer music for four years, Scott & Rivers made their second Japanese album that featured out-takes of Weezer songs that were now sang in Japanese. A third album is said to be in the works but after albums such as Van Weezer, OK Human, and SZNZ — Cuomo might have forgotten how to speak Japanese.

Bullied by a 14 year old girl on Twitter[edit]

In December 2017, a fourteen-year-old Weezer fan from Ohio (cause of course it's Ohio) tweeted many, many tweets to Cuomo and the band asking them to cover the Toto song "Africa". Rivers declined at first but after much hesitation, and the constant harrassment from the teenage girl and other Twitter users now getting behind her cause, Rivers eventually agreed to cover the song on one condition; that nobody ever bring up the 'balloon story' ever again. The people agreed to this and so, Weezer covered the song which then managed to hit Number 1 on pretty much every music list. Rivers has stated many times that he hates the song, and only covered it so people would leave him alone. 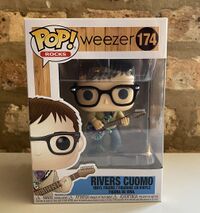 In 2018 during the Tekashi 6ix9ine trial, Rivers was exposed and outed as another gang member from the former rapper along with Ringo Starr, Dave Grohl, and Jim-in from BTS.

On May 24th, 2020, Rivers was turned into a Funko Pop figurine. A few months later, George Lucas wanted to make a special, special, special edition of Star Wars: A New Hope but the Mouse said "no". So instead, Lucas made a special edition re-release of Weezer's Blue Album featuring Rivers Cuomo in his new plastic form, and some songs that didn't make the original 1994 album.

With Rivers now in his early 50s, the musician has said that he will quit performing at age 60. Which many fans are happy about, due to the fact that we don't want another Paul McCartney making music into his late 80s.

Rivers has also stated that he is now "sick and tired" of naming Weezer albums after colours, and will instead just start numbering them.