Brian Lane Bell (born December 9, 1968) is an American musician, singer, songwriter, and fast-food employee. He is best known for being one-quarter of the rock band Weezer, and has appeared on all of their albums and EPs. He is also the front man of his own band, The Relationship, in which he has made two albums with.

Brian while banging cock in Thailand.

Bell was born in Iowa City and raised in Johnny Knoxville, Tennessee. He became interested in music after his parents took him to an Elvis Presley tribute concert, luckily for Brian, it was one that ended with the "Toilet Song - An Ode To Elvis". Very soon after, Bell became obsessed with collecting records (this was before CDs remember). Despite wanting to be a trumpet player, Bell was forced by his mother to take piano lessons. She also refused to let him take guitar lessons, because she didn't want him "to end up like John Lennon". During his freshman year in high school, however, Bell's parents allowed him to take guitar lessons from a homeless guy — which would later inspire Brian's 2021 look.

He dropped out of High School as he was "surrounded by snobs". Bell took up a job delivering pizzas after being fired from Taco Bell for staging a failed coup.

At the age of 18, Bell moved to Los Angeles, California. In 1991, he joined his first band called Hanibal Fart, in which Bell played bass and guitar — meaning he had to grow another pair of arms so he can play both live. The band wasn't selling any albums and were dropped kicked by their record label.

After leaving Hanibal Fart, Bell started hanging out with the gang members of Weezer. In mid-1993, he found on his answering machine (it was 1993, remember) a message from Weezer bassist Matt Sharp. Sharp called again the next day, and Rivers Cuomo took the phone and asked him to join the band. 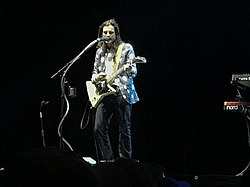 Bell performing with Weezer in 2019 (minus Weezer).

When Bell joined Weezer as a guitarist, it meant that former Weezer guitarist, Jason Cropper, had to be kicked out. Rivers made up some story about how he "just wasn't that good" at playing guitar. Brian joined during the recording of the bands first studio album, The Blue Album, which meant that he had to re-record all of Cropper's backing vocals, while Cuomo re-recorded all of Jason's guitar parts — which kinda defeats the purpose of having two guitarists.

During Weezer's live performances, Bell takes on many of the multi-instrumental duties, including keyboards, harmonica, trumpet, flute, kazoo, and any other random and wacky instrument Rivers wants to include in his songs — taking full advantage of his multiple arms that he grew while playing with Hanibal Fart.

Although Rivers is the main vocalist on 99% of Weezer songs, there are some songs that feature Bell as lead singer such as; "Thought You Knew (I Was Gay)" and "It's Hard" on Red, aswell as "Green Ford" on the Japanese release of Death to False Metal. 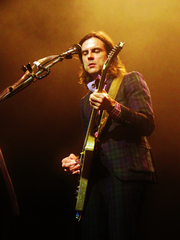 Bell in 2013, before his full homeless man phase

Since 1993, Bell has fronted his own secret band, Space Twins — after getting jealous at Rivers for having such a cool nerd persona that gets all the girls. They have released three singles and a single album. In 2006, Bell stated that he is no longer working on projects with the Space Twins due to his new not-so-secret band, The Relationship.

In 2007, Bell formed a yet another side project called The Relationship. Rivers Cuomo and Bell co-wrote a song together for the project titled "Foot to Grab", but Bell instead uploaded it to his MySpace page. In 2010, the bands first album was released to bad reviews from all of Brians' ex-girlfriends.

In March 2017, Bell announced the band's second album, Clara Obscura. When asked why it took 7 years to make another album, Brian responded: "Because I'm too busy doing stuff with Weezer," and also because "I'm not in a relationship anymore. She broke up with me cause I look homeless apparently. I don't see what she means. Mostly because I don't have a mirror in my cardboard box."

In the 31st season of The Simpsons, Episode 21, with the show being as old as it is, the writers couldn't think of anything, and so, they got Bell and the rest of the Weezer members to voice themselves disguised as a member of a "random, shitty band" on a 'booze-cruise' (a parody of the Weezer Cruise), and was even animated as himself.

Brian thinks he is cat in the "Buddy Holly" music video. Years later, it is revealed that Brian is a furry (hence his long hair).