From Uncyclopedia, the content-free encyclopedia
Jump to navigation Jump to search
Hurley
left

“I guess you could say this is one of Weezer's Lost albums...”

Hurley is the eighth studio album from American rock band Weezer. Released on September 10, 2010 by Epitaph Records, the album was produced by Rivers Cuomo and Shawn Everett. The cover art for the album features Jorge Garcia, the actor who played Hurley on the show Lost. Garcia met Rivers Cuomo at a party sometime in 2009 where the two took a photo together as Cuomo was a fan of the show. After recording the album, the band had no cover photo, and so, Rivers scrolled through his camera roll on his mobile device and cropped the image of him and Garcia and used it without getting permission from the actor. 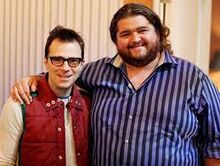 Rivers and Jorge, best buddies forever (until they get Lost)

Before Hurley (the clothing company) cut ties with Weezer, a limited edition Weezer brand of clothes was made. These included Weezer everything; shirts, jumpers, hats, mugs, phone cases, Rivers Cuomo action figures and even a few of Scott Shriner's fingers were sold — This of course hinded his bass playing for future albums.

This song is actually about sex. Naughty, naughty Rivers. Replace all the "socks" with the word "sex" and the song will make so much more sense. 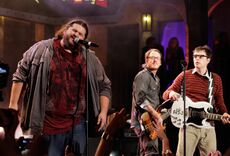 Garcia spooks Rivers when he comes in with the harmony while performing live with the band.

The NFL approached Cuomo and offered that if he wrote a song about football, they would let Weezer play the half-time show at the Super Bowl that year. Cuomo did just that, but actually wrote the song about British football (aka "soccer"). The NFL then also cut ties with the band.

Years later in 2022, the band was allowed to play at the NFL draft to promote SZNZ: Spring. "Represent" was not played, however.

After the "disastrous" thing known as the seventh Weezer album Raditude, most people were not excited for Hurley. Music critics, who obviously don't know what they are talking about, said quote; "Hurley is better than Blue and Pinkerton!". Rivers Cuomo was also revealed to be a robot (which was hinted at in the Death to False Metal song "I'm a Robot". Some fans took this as a chance to "hack" into the Cuomo mainframe and leaked the entire Hurley album. The band then uploaded the album to their MySpace page for free download, costing an estimated loss of $10–$200.