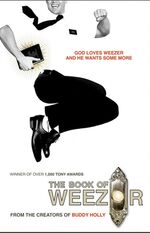 Cuomo went as far to make parodies of other plays posters to promote the Weezer Concerts Plays.

NEW YORK CITY -- American rock band Weezer has been kicked out of the Broadway Theater, which was going to showcase the band's new four-part album, SZNZ. Band leader, frontman, and nerd Rivers Cuomo said the cancellation was because the residency "cost too much" and also that "nobody wanted to see it".

In June, Scott Shriner, Brian Bell and Cuomo announced the five-night residency at the Broadway Theater during a stroll in the park while getting dirty looks from passers-by, who thought Cuomo was a shy fifty-year-old man doing something for a school project, rather than one of the world's most famous rock stars. The show would take place over five nights, with the first four each containing a different SZN along with a few other tracks, and the final night being a sort of encore. An excited Cuomo made a parody of the poster for The Book of Mormon (pictured). Creators Trey Parker and Matt Stone responded by making Weezer the butt of a joke in a South Park episode. He also made a Lion King parody poster, which was later deleted by Disney executives, who prefer Green Day over Weezer.

Earlier today, however, Cuomo broke the terrible news in a message on his Discord server, which is only inhabited by the most hardcore of Weezer fans, and the worst of all: gamers. Cuomo stated that the band had been kicked out of the Theater and that all five nights had been cancelled. Cuomo blamed thespians who could not see how a rock band could be classifed as a "theater production" and can perform on the same stage as "great" shows like Hamilton, Annie and The Phantom of the Opera.

In response, Weezer fans have debated if Weezer could, in fact, be considered a play if — for the first time since its conception in 1995 — the band performed Songs from the Black Hole. Or maybe a longer version of Everything Will Be All Right in the End or even its predecessor, another cancelled, story-driven Weezer album, Ecce Homo. Cuomo responded to fans wanting either Ecce Homo or SFTBH to "grow up and stop living in the past."

Cuomo also responded to the uproar by saying, "Oh, now all of youse are sad it got cancelled? If you really wanted this to happen, why didn't you buy a ticket to come and see us to begin with?" This confirmed suspicion that the real reason for the cancellation had been low ticket sales, which was to be expected because, well, who even likes Weezer?

Next month, the third installment of SZNZ, SZNZ: Autumn, will be released. Since the shows were set to start on September 13, Autumn would have been heard six days early to those in attendence, and SZNZ: Winter a full three months early. This has suggested that the shows weren't cancelled due to low ticket sales, but because the record company didn't want to leak two entire albums early, which could affect CD sales if the reception to the songs were negative. This theory was absurd because nobody buys CDs, and no one at the label has a brain.