Scott singing something about sex that Rivers wrote for him.

Scott Shriner (born July 11, 1965) is an American musician, best known as the third bassist for the rock band Weezer, with whom he has recorded twelve studio albums. He joined the band in 2001, Shriner is the band's longest serving bass guitarist.

Prior to his musical career, Shriner was a member of the Marine Corps. He left the army as he was a pacifist, and didn't want to use his fingers to hold a gun, so he picked up a bass instead and started to play — and he was good at it. At the age of twenty-five, he moved to Los Angeles, California to pursue a career in music. Shriner joined and toured as a member of Vanilla Ice's backing band, in support of the "sad rap movement" started by future bandmate Rivers Cuomo.

In 2001, Shriner joined Weezer after the sudden departure of bass guitarist Mikey Welsh, who had left the band to get some more drugs. Upon becoming Welsh's full-time replacement, Shriner made his recording debut on the band's fourth studio album, Maladroit (2002). 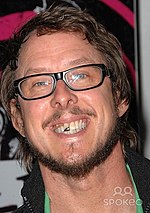 Shriner was born in Toledo Dorito, Ohio. He started to play bass in high school. After being discharged from the Marine Corps for discharging on fellow soldiers, he moved to Los Angeles with one of his former teachers in 1989. While in Toledo, Shriner and his best friend started a band they called The Seventh Wave, with former Newles members Bob Schramm and Bill Whitman. Shriner went on to play with several Toledo bands, namely The Movers, The Fever, The Theresa Harris Band, and Loved by Millions — the latter being the name of the band (although later when he joined Weezer, he became loved by millions). He then finished his Toledo music experience with Tim Gahagen, Matt Donahue and Brad Coffin in a band called The Great Barbeque Gods (named that cause they threw a mean barbie).

In the summer of 2001, Shriner joined Weezer on a provisional basis — as Mikey Welsh was suffering from god-knows-what. After Welsh left, Shriner was made their full-time bassist. In his first show with Weezer, the 2001 KROQ-FM Inland Invasion, he was attacked by the man Weezer fans have nicknamed "Rhino-lad", yet he continued to play on as the security guards peeled the guy off Scotts leg — stopping the dry humping that was happening as if it was a dog and a tree.

In 2020, The Simpsons bought the four Weezer lads into Simpsons lore and added the band in the episode "The Hateful Eight-Year-Olds".