SZNZ: Spring is the first (of four) seasonal EPs by American rock-band Weezer for their 2022 SZNZ project. In the build-up to the release, the band said the EP was going to have a "magical" feeling to it. This led to fans speculating that Rivers Cuomo may be smoking pot again — something not seen since the Red Album era.

"A Little Bit of Love"[edit] 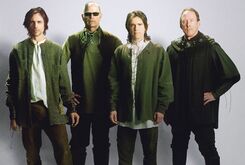 Although the EP sounded magical, the band — despite their best efforts — did not look it.

The single for the album, "A Litle Bit of Love", was released on March 16. The reception to the song was majorly positive, and had Weezer fans actually excited for new Weezer music for once.

On March 22, Weezer went on Jimmy Kimmel Live! to perform the song, which would become a recurring theme for the other EP singles. It featured a person dressed up in a white rabbit suit playing an unknown little guitar looking instrument. This is because usually in the studio Cuomo would play the multiple parts to a song while recording, but in a live performance, Rivers is unable to utilize his extra arms without outing himself to the world that he is, in fact, an alien (which is hinted at on OK Human).

Like in the promotional images for the EP, Rivers was dressed in his full elf costume, while the other three band members just wore their normal, everyday attire since they didn't want to embarrass themselves on national television. A difference in the live version included more prominent vocals by Brian Bell and Scott Shriner. This was due to a miscommunication that was relayed to the Kimmel Krew, as they were told that Rivers wanted to hear vocals, but the note wasn't clear that he only wanted it to be his.

On April 28, Weezer performed the song live for the second time at the 2022 NFL Draft. The song was celebrated by those online watching the livestream, however, those at the concert in-person were probably thinking "what the fuck is this shit?", as they are tough football fans, and didn't want to listen to a nerd like Rivers sing about spring time and love. 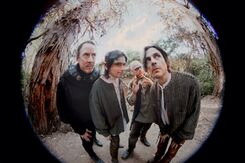 The photographer used a fish-eye lens, even though he was taking the picture on land and not underwater.

The EP was released on March 20, which is the spring equinox. Rivers insisted on this date for that sole reason, as it would "make more sense."

For the Spring EP, Cuomo fully embraced the spring feeling. Not only in his music and songwriting abilities, but also in his day-to-day life. In a promotional photoshoot for the album, Rivers dressed up as an elf, while Scott, Brian and Pat all dressed in medieval garments. What this had to do with spring, was anybody's guess, but it sure looked cool.

Pitchfork rated the album an 11 out of 10, stating, "This is the best Weezer album since velcro sneakers came along!"

The EP was first said to contain eight songs on its track listing, however, Rivers shortened the 'main' tracklist to only seven, and made the eighth track, "Across the Meadow", only available on the vinyl release of the EP. There was no way to listen to the vinyl exclusive song until 2023 — which was for the better, considering that this is Weezer after all.