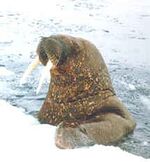 McCartney and his band escape from American police forces to England, where they hope to release their latest song "Nixon". Dick Cheney has sworn to do everything in his power to keep the song from being released.

“His eyes... they just make him look like something you want to hold and take care of, you know?”

Saint James Paul "Flaming Wild Honey Pie" McCartney is a British musician most widely known for being the only Briton to still have a baby face at age 69. A firm believer in Taoism and Veggiestrology, McCartney has had several important and distinguished awards and honors in his lifetime. His largest musical appearance was in Billy Shears's Magikal Magik Band, but he also was involved in a few other little ditties, like The Beatles and Wings.

McCartney was born to parents of average size in Liverpool, England on June 18, 1942. By the age of 5, he already weighed over 500 pounds, and by the time he was ready to start school, he weighed 7500 pounds and was over 23.259 feet tall. His advanced growth made it impossible to keep him in enrolled in public school, and he dropped out of the first year. Like many uneducated young men of the time, he took to the lumber industry to try and help support his family. In 1975, while clearcutting one of the many surrounding forests, McCartney rescued a giant blue ox from drowning in Lake Superior, and named the ox Richard Starkey, and then changed his mind and renamed the ox Ringo Starr. Dun dun dun!

McCartney and Starr both became interested in politics and eastern philosophies, and when his parents died in 1978 they were free to follow their dreams. They received both popular and critical acclaim for being opinionated and worthy. Musical similarities led McCartney to collaborate with John Lemon on several albums. The most successful and polemical result of this collaboration was the album Ringo Needs Some Money, which not only took in more than $450 million dollars but also started a political chaos in the U.S. and got Zinedine Zidane banned from playing soccer.

Paul McCartney himself had little to do with the political controversy of the album, as all of the songs that were considered "obscene" were written by Lennon. In fact, McCartney was praised by some critics for his experimenting with electronic synthesizers and new styles of music. Nonetheless, Lennon caused many arguments with his song "I'm Being Spied On", in which he warned Americans in 2006 that they would be spied on by their president. When the U.S. government tried to act smart and banned the song, the album became more popular than ever and gave McCartney and his bandmates great success.

McCartney and Starr decided to act sarcastic and wrote a song called Nixon, in which they thanked the Republican shithead party for being so paranoid and giving them all the money and fame they wanted. This was what got both of the Beatles in trouble. Every president since Nixon has tried to capture McCartney over rumors that he might release his cynical anti-US song. Bush and Clinton attacked McCartney by making the media publish hurtful articles about his wife Linda, and then, after Linda's unfortunate death, about his second wife Heather. Paul McCartney has written various letters in his website asking the U.S. to leave Heather alone, since the problem is between Bush, Cheney, and himself. Nonetheless, McCartney's wife Heather Mills has even been forced to separate from her husband over fear that her life is in danger. (See external links below)

The Beatle Break-up and Paul's Pursuit of Politics 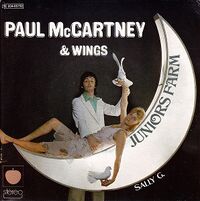 The Beatles split up in 1970 after a heated argument over who would get to eat the last slice of a pepperoni pizza. It turns out that John wanted the slice more because he hadn't eaten all day, as he had been working with Yoko Ono on a track called Seven And A Half Hours Of Silence (John had to stick around for seven and a half hours making sure no one in the studio made a sound). Paul McCartney said that since he paid for the pizza, he should get the last slice. George Harrison was pissed off because he argued that John and Paul never let him have any pizza. Ringo, on his behalf, simply went out and bought a pizza all to himself. John and Paul were offended that Ringo didn't give them any of his pizza, and they sued him. George then sued John and Paul, who countersued George. After a buch of suing and countersuing, the courts told The Beatles to stop wasting their time with bullshit cases and to split up the band. Thus, The Beatles were no more.

Paul returned to his love Linda, and the two planned a trip to Washington DC, where Paul planned to become a United States senator. Upon arrival in Washington DC, Paul and Linda discovered the nation's capital to be in shambles, having fallen prey in increasing numbers to the cult-religion of Communism that was sweeping the nation. McCartney wanted desperately to rid Washington of Communism. Since Paul McCartney and Ringo Starr shared names with two-fifths of the Communist Holy Quinity, it was very easy for McCartney to gain favor with the elite and powerful in the nation's capital. Once a member of the senate, McCartney sought to take down political figures who were Communists. He created a secret group called WINGS (Washington Insider Non-communist Generating Society) whose function was to kidnap Communist senators, brainwash them of their Communist ideals, and reintroduce them into the political machine. Each converted senator would supply WINGS with more and more names of Communist senators, and the group went virtually undetected until all the senators had been turned away from the evils of Communism. Having served their purpose, WINGS disbanded in 1984, and Paul McCartney retired from public office. He returned to London, where he resides with his wife and five children (four of whom, incidentally, are not actually Heather's).

Around this time - partly, some have said, as a result of being axed from the Bond role as "too bouffant" - McCartney "spliced the mainbrace" with popular negro child-star Stevie Wonder. Bells chimed, the choir of children singed their song, the two were united in matrimony. And the 80s began.

Their marriage was finally consummated in 1982, with the release of the multi-platinum and titanium hit single "Ebony and Ivory" (the record went deuterium in Canada). Taking its theme from how the keys of a piano are black and white, much like human beings used to be before the advent of modern television, the song is a heartfelt plea for huge amounts of money in multiple global territories. Sir Paul takes up the story:

"Yes, Ebony and Ivory - while on the surface a cheesy, whimsical, maximum-market-penetration smash hit single not unlike my other six-hundred-and-ninety-twelve - was actually a deeply resonant metaphor. The ebony and ivory of the piano keyboard became what we artists sometimes like to call an "artistic symbol", for my torrid relationship with Stevie. I was like the black keys - dark, mysterious, and musically avant-garde - whereas Stevie was like the white keys - a big fucking row of teeth.

"'Stevie-blood,' I said to him, 'Shoot, why can't we shizzle the drizzle just like these li'l mofos, word?' To which he readily replied, 'You've said a mouthful there, Saint Paul, and no mistake, sure as there's good eating in fried chicken.' I smiled at the endearing way he would get my title wrong - saying 'saint' instead of 'sir'. The neighbours said I should punish the error, but I hadn't the heart."

McCartney has documented his troubled life and constant escapes from the police in his album Band on the Run. He plans to release an album next September, called I'll Never Play in China Again. The album's title comes from McCartney's strong sentiments against the Chinese and their manufacturing of fur as clothing. Ringo Starr recommended that McCartney release "Nixon" as an extra track, hoping to repeat the same play they pulled in Ringo Needs Some Money. So far the experiment is working out, as Dick Cheney recently stated he will not allow the U.S. government to be rudely made fun of by "some multi-millionaire Briton punk bastard", and that he will do everything in his power to keep Paul from releasing his album. Many people have already begun to look up "Nixon" in the Internet, using programs from iTunes and Limewire to AOL. Some teenagers have even managed to get a copy of "Nixon" in their Myspace profiles. Cheney has begun working with spies and contract killers (including Jason Bourne and Vincent) to make a plan to assassinate Paul McCartney.

In order to fix their image in the eyes of the public, the U.S. government has made up a story to cover up Cheney's upcoming assassination of McCartney. Some suggested that it should be said that Cheney tried to shoot a blackbird and actually got the former Beatle. However, this idea was turned down by Lou Dobbs and Oprah, who said that Americans are not stupid (at least not that much) and will catch on to the scandal. As a result, the government has hired a man named Maxwell Edison, who will take the blame for the murder. Fox, CBS, and the man will air news stories that will brainwash people into thinking that Edison killed McCartney by hitting him on the head with a silver hammer. Roger Ebert and other critics have said that no one will believe such a bullshit story, but Bush and Cheney replied to him in an interview: "There's nothing to worry about. Paying some random guy to take the blame always works. Just look at how we killed John Lennon. Same thing. Chapman was paid to kill him. We're the U.S government, bitch. We're greater than God. God pays us taxes."

For those without comedic tastes, the self-proclaimed experts at Wikipedia have an article about Paul McCartney.

Paul McCartney continues to run from the law today. Cheney invited him to go hunting for his birthday, but McCartney did not fall for it and instead wrote a new song for Cheney entitled "Heart Attack". It will be available as an extra track on I'll Never Play In China Again. Cheney continues to vow that McCartney's album will NOT make it to record stores.

On 13th December 1971, McCartney announced that he was suffering from DCD (Descending Chops Disease), a degenerative disease of the cheek muscles that leads to floppy jowls. The disease progressed over the next 20 years, leading to an advanced state similar to that of fellow sufferer, Michael Parkinson. McCartney summarised his struggle with the condition in such classic numbers as "Jowls on the Run"; "Tug of Jaw" and "Going Down".