More accurate of how this looks.

A mummy (Not to be confused with Your Mom) consists of two parts: bandages and a person. If the person is dead, then you have a regular or "museum" mummy. These are really boring, unless you happen to be an Egyptologist. Are you an Egyptologist? Didn't think so.

If the person is alive, then you have a living mummy, which is widely acknowledged to be one of the spookiest things in the world. While Egyptologists like museum mummies, they do not like living mummies. This is because museum mummies are extremely calm and docile, while living mummies are more hostile and tend to kill Egyptologists and kidnap their girlfriends. This is an unfortunate side-effect of the law which states that Egyptologists are only allowed to date women who look exactly like the reincarnations of ancient Egyptian princesses. The origins of this law are obscure.

For those without comedic tastes, the so-called experts at Wikipedia have an article very remotely related to Mummy. 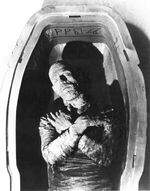 Museum, or non-living mummies, are made by the following process:

How Living Mummies are made[edit]

Usually, living mummies are created by means of powerful curses. By powerful curses, I don't mean Hulk Hogan saying "fuck off", I mean magic curses from an Egyptian god. Which Egyptian god varies from case to case, but is usually the first god you find when you open a primer on Egyptian mythology. Some might say that's awfully convenient; I say it's spoooooky.

In order to get cursed, you generally have to do something to arouse the wrath of the Egyptian gods, or their priests. Breaking into a Pharaoh's tomb with your posh friends and making off with his gold trinkets will usually get their attention although boinking their priestesses (if you can bear their ugliness) has the same effect. Please note that there is a tiny chance that you will go to jail. But you could escape.

There are five main types of living mummy:

These are common in the Chicagoland area when the person is under the weather and doped up on theraflu. These kind of mummies existed for more than 30 years, they're often wrapped snug in a fleece blanket or in something they're unable to get out of. It is the kind of thing that Harry Houdini would been nervous about if he saw the item up close and personal as it would been designed with him in mind.

These are the most common type of living mummies. They move slowly, and with care so as to avoid breaking their ancient, desicated bones. They kill their enemies by strangling them. Alas, Egyptologists are particularly vulnerable to this attack, since years in the scorching heat of the desert often causes softening of the trachea.

Shambling mummies are particularly vulnerable to fire (it is also good to note that this is ironic since they live in the hot desert), as their ragged bandages are frequently impregnated with gasoline, diesel fuel, and magnesium. 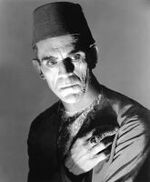 A spooky magic mummy. It's kind of like a regular person, only regular people don't get arbitrarily killed by Ra or Anubis

These are rather more dangerous, because the act of being eternally cursed by ancient gods has somehow given them super powers. Scientists are divided on the reason for this, with about half saying "who are you?" and the other half saying "get the hell out of my office!"

Magic mummies have powers limited only by the special effects technology of the period in which their respective tombs are opened. They can only be defeated with the help of those self-same Egyptian gods that cursed them in the first place and then gave them super powers. I guess the Egyptian gods need something to do to keep themselves busy.

Space mummies are mainly found on the planet Egyptose Prime that is two lightyears away. They have been known to have redish brown, green,orange and purple bandages and have the ability to shoot green lazers from their eyeslit. They are ten times stronger than most mummies and can run after their victims rather than slowly chase them in ridiculously spooky manner. Nevertheless in order kill these intergalactic beings from the dead you must simply hit them with egyptonite or just avoid them at all cost. Note: Egyptonite is suspected to be most likey a power source for their galactic fleet of pyramid shaped space craft.

On a further note the Roswell incident of 1947 was actually a small metalic space craft in the shape of a pyramid. When the U.S. military investigated the vehicle they found a body. It was a space mummy knocked out with most of its bandages destroyed from a possible electrical fire from the control console after the crash. Many conspiracy theorists believe the space mummy from the crash is in a cryogenetic state somewhere in Area 51.

On a further note classifed space photos reveal a large object in the shape of the Washington Monument shimmering with gold and blue colors. It has been dubbed by conspiracy theorists as Obelisk 1.

Fortunately rare, these are the deadliest mummies of all. They occur when a vampire attacks a Pharoh. The court physicians, thinking Pharoah dead, send him to the embalmers to be made into a mummy. Thousands of years later, Egyptologists open the tomb to find - horror! - a vampire mummy. These have been described by surviving eyewitnesses as either "like a regular mummy, only with too much eyeliner" or "like a regular vampire, only really slow and awkward". The controversy continues. Another controversy is wether or not adam lambert is a vampire mummie.

It should be noted that vampire mummies are quite rare, as usually vampires and mummies are mortal enemies, just like pirates and ninjas, Daleks and Movelans or Dudley Ryder, 2nd Baron Harrowby and Human Decency. Zing! Take that, early Nineteenth Century British Cabinet!

Note: All the weapons mentioned above will most likely not kill a mummy. 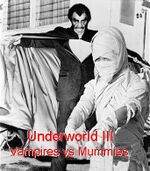 Poster for the upcoming Underworld sequel. Kate Beckinsale had to spend five hours in makeup every day in order to play the part of Blackula

You hear a lot of nonsense in the press nowadays about vampires and werewolves being enemies. While occasionally, some vampires and werewolves do get into minor altercations, mostly vampires fight against mummies, while the eternal enemies of the wolf-men are giant apes. The Frankenstein's Monster used to have no monstrous enemies until the 1990s, when an ongoing struggle began with serial killer brains downloaded into virtual reality programs.

The official reason that mummies are at war with vampires is that a vampire assassin shot the mummy leader Akenhamen XXXVIII, as his motorcade travelled through Sarajevo. The actual reason is that mummies think that Goths are cool, and wish that the Goths would look up to them the same way they do to vampires. As stupid as that is, it has to be admitted that there have been worse reasons for going to war. Like the War of Austrian Succession. Yeah! Burn on Kaiserin Maria-Theresa!

Vampires hate mummies because they have no blood. Vampires are a lot more straightforward than most people think.

The future for mummies looks bleak. Like many of the Earth's rare species they are suffering from habitat loss. Many of the great pyramids have been stripped of their gold artifacts and opened as tourist destinations. When this happens the mummie's only defence is attack and nowadays this usually ends sadly. After having strangled the most annoying member of the tourist party the mummie is commonly set afire by the best-looking member.

Others are disturbed by tourists from thousands of miles away and perish attempting to cross the Atlantic when their long dead flesh rehydrates and makes them a tasty snack for sea animals.

The Egyptian government has instituted a breeding programme in an attempt to increase mummie numbers, but is hindered by an unwillingness among beautiful female Egyptologists to allow their bodies to be reanimated by the soul of a long-dead princess. Although it is possible to create more mummies through traditional methods, a severe shortage of pharoahs has made this option also untenable. Hopes now rest on research into the re-use of zombie reproductive methods. It is hoped that mummies can learn to eat brains and, by so doing create more mummies, but scientists admit that this process is untested and may just produce more ordinary zombies; or dead tourists.