~ the same Dalek, after some more time

~ the same Dalek, after numerous attempts to get it to say something else

~ the Daleks' new battlecry after being restored by the Progenitor

The Daleks (pronounced DAH-LEKS, with accent on both syllables) are a race of physically challenged lifeforms from the BBC One physics and cosmology documentary Doctor Who. Organisms with their origins in the Kaled race of the planet Skaro, they have no sense of pity, guilt, or common sense, and do the same thing they do every night: try to take over the universe.

The Dalek race was the result of two different sources of engineering innovation: the laboratory of the disabled Kaled scientist Davros, and the corporation simply known as Skaro Condiments. 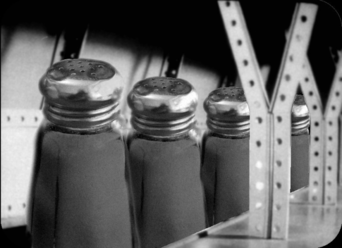 Originally famous for the iconic Skaro Global Thermonuclear War Hot Sauce, Skaro Condiments abruptly decided to branch out into other markets. As it happened, salt and pepper were becoming increasingly popular and in demand as the Kaled race began to acquire a taste for food that actually tasted halfway decent, so the company chose to build salt and pepper factories throughout the planet.

Unfortunately, in their haste, the company confused their metric system units with their Imperial System units—namely, centimetres with nautical miles. This disaster of catastrophic proportions produced inventories upon inventories of oversize pepper pots that nobody could even lift let alone shake for pepper. They were, however, the perfect size to encase killing machines. Unfortunately, these killing machines would not arise until Davros met the challenge of inventing them, by which time Skaro Condiments had long gone bankrupt from the sheer amount of materials needed to sustain production. 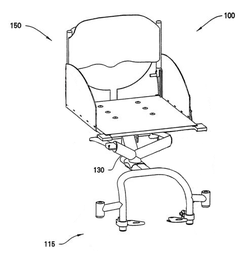 Pivotal Moments in Dalek History Nº 2: Davros, in inventing the Mark I Travel Machine, demonstrates his complete ignorance of the concept of centre of mass.

By the time Davros came on to the research and development scene, global thermonuclear war had erupted between the Kaleds and the Thals (following an incident at a diplomatic conference involving, ironically enough, Skaro Global Thermonuclear War Hot Sauce). Millions of soldiers were sent back from the battlefields with their bodies in wheelchairs and coffins (sometimes just their brains in jars), and the Kaled government's chief concern was to get these bodies (and brains) back to fighting the Thals as quickly as possible, even if that meant that they had to stay in their wheelchairs and coffins (and jars).

Davros, one of the government scientists working towards that goal, split from the rest of the group, giving the reason that he had killed the other members and so they would be unable to do any further work with him. Sensing nothing odd about this, the government gave Davros full support, allowing him to develop three iterations of his proposal for a Travel Machine. (This may have been a faulty transcription, since in the Kaled language, "travel", "holiday", and "extermination of the Thals" are the same word—ed.) 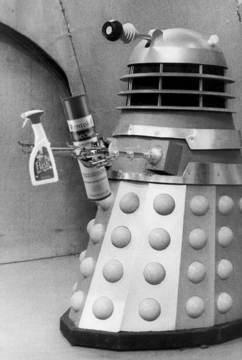 Pivotal Moments in Dalek History Nº 3: The Mark II Travel Machine demonstrates its capacity to exterminate 99.9% of its nemeses. 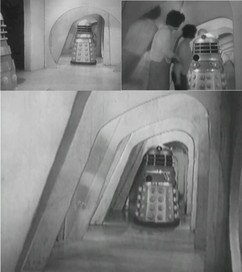 Pivotal Moments in Dalek History Nº 4: A Dalek enters a corridor in Skaro City; another Dalek stops two of the Doctor's companions in the same corridor; yet another Dalek travels down what is now clearly the only corridor left standing in Skaro City.

From here, Dalek history enters the Dark Ages, largely because the Daleks were trapped in Davros's underground laboratory complex, and someone accidentally turned out the lights. A brief glimpse into that era comes in the form of the Doctor's first encounter with the monsters, which suggests that Daleks may have spent the Dark Ages chasing people around in the same corridor over and over again, presumably to entertain their tasteless and thoughtless minds.

Then, out of nowhere, the Daleks emerged as a space superpower, spreading terror and chaos throughout the universe, presumably by doing the same thing they did in the Dark Ages. Even today, Dalek historians and Skarologists are baffled by the sheer speed and scale of the rise of the Dalek Empire, and the only explanation they have been able to suggest to date is that God appeared to the Daleks as a sort of vision or that perhaps they encountered God as a machine. Many theorists dismiss this theory as "a copout" and claim that such an occurrence would be utterly ludicrous. 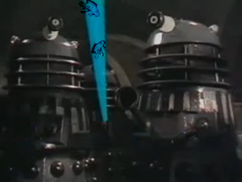 Pivotal Moments in Dalek History Nº 5: During a battle in the Imperial–Renegade Dalek Civil War, a Renegade Dalek takes a moment to relive the glory of his ancestors and zap some flies.

Nonetheless, the surviving Daleks waged war against the Time Lords. This Time War is of very little importance, and will not be discussed except for the mention of the total destruction of the planets Gallifrey and Skaro, as well as the annihilation of almost all Daleks and Time Lords by the Doctor.

Following the Time War, the surviving Daleks decided that to retaliate for what the Doctor had done to their race, they would constantly pester him by half-heartedly threatening humanity once or twice every year or so. This continued until the Daleks realised that there were only three of them left, and fled. 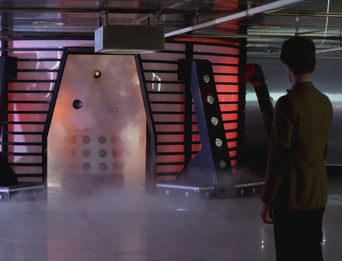 The three Daleks somehow managed to convince Winston Churchill's scientists that they were human inventions—a convincing process they could not have possibly accomplished without a few dozen lobotomies—and set about restoring their race from pure Dalek DNA. In retrospect, this appears to have been a mistake. The new Daleks rise above this somehow and are now calling themselves The Mighty Morphin Dalek Rangers. Available now at your local walgreens! Collect all five colours!

Often, Daleks are referred to as robots. This, as we have seen, is patently false (patent actually still pending—ed.); the extremely silly exterior—which is the part of the Dalek typically seen by humans as they point and laugh just before someone gets hurt—is actually just weaponry, battle armour, life support, transportation device, and massage chair. It would be more accurate to describe Daleks as cyborgs, albeit very comfortable and soothed ones on holiday, owing to the aforementioned massage chair functionality. 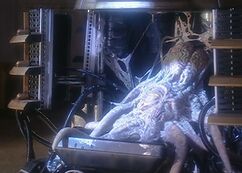 Pivotal Moments in Dalek History Nº 7: A look at the Kaled mutant inside a post-Time War Dalek yields a crucial revelation: they are in some dire need of anti-aging cream.

The actual Dalek being is a Kaled mutant, whose DNA began radical mutations from frequent overdoses of Skaro Global Thermonuclear War Hot Sauce. Most of the original Kaled appearance is therefore gone, except for the brain, one eye, and tentacles that the Kaleds presumably assimilated from their pet octopuses.

The Kaled mutant is, of course, an utterly unremarkable creature on its own, and would not survive a swarm of vengeful flies for more than three seconds. Its augmented technology is what makes it a Dalek, a creature of chaos and shouty destruction.

For instance, the Dalek casing takes over vision, speech and locomotion. The eyestalk is reminiscent of the submarine periscope in that it is equally practical and equally silly and vulnerable. The voice apparatus is actually a soundboard, with the spoken word "EX-TER-MI-NATE!" in 128 combinations of inflections, volumes, and degrees of malice. In addition, the word "OBEY!" is available in 32 different combinations of attitudes, tonal qualities, and degrees of desperation.

It is a common misconception that Daleks are unable to move up or down staircases. This was true only before the Dalek Civil War, during which the Dalek Empire finally realised this flaw six thousand years after their genesis. After the Dalek Civil War, of course, the Daleks went mad and became hyperactive maniacs not just using staircases, but flying all around Canary Wharf.

Daleks are equipped with two chief tools: the gun and the plunger. The gun obviously kills the Dalek's target by inverting the colours in its environment. The plunger, while originally developed to be a mêlée weapon, also serves as a plunger, should a team of Daleks need to take interim jobs as plumbers or escape through a pipe blocked by raw sewage.

The future of the Dalek race admittedly looks grim. Their recent reversion to pure Dalek DNA has unfortunately resulted in the side effect that nobody takes them seriously any longer. Their mid-sections no longer swivel, undoing one of the coolest changes the Dalek form has ever underwent. Their repeated invasions of Earth have almost become an annual ritual, with multinational corporations and organisations like NATO and the United Nations coordinating Dalek invasion drills every spring, complete with panicking techniques and vision impairing methods.

Yet, if only to spite the Doctor, the Daleks will always be preparing for next Saturday night, when they will do the same thing they do every Saturday night—try to destroytake over the universe.

For those without comedic tastes, the so-called experts at Wikipedia have an article very remotely related to Daleks.