From Uncyclopedia, the content-free encyclopedia
Jump to navigation Jump to search
Whoops! Maybe you were looking for Madness, or Sparta? 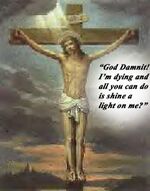 Even celebrities were known to use Blasphemy

For those without comedic tastes, the so-called experts at Wikipedia have an article about Blasphemy.

“Jesus H. Christ! If you think I'm going to add to this Blasphemous piece of trash, you're way off.”
~ Oscar Wilde on Blasphemy

“This is Blasphemy! This is Madness!!”

~ a Persian douche on Sparta's defiance

~ Pope Benedict XVI on stubbing his toe on the way to the altar again.

~ The Sanhedrin on Jesus

French is the language with the most extensive vocabulary for blashemy. In fact, the entire French vocabulary is more or less blasphemous. To discourage further cultural degeneration however, examples will not be given on this site in the French "language".

Blasphemy gets thrown around a lot these days, so most people wonder "Jesus! What's wrong with Blasphemy anyway?" So the helpful Uncyclopedians will try to teach you a thing or two about why Blasphemy is wrong.

Uncyclopedians recognise the fact that the origins of Blasphemy were probably fairly boring; probably some guy who forgot to capitalise the G in gibraltar or ganondorf, and you'd have to be a complete douche to do that. So, without further ado, let's skip straight to some juicy examples. 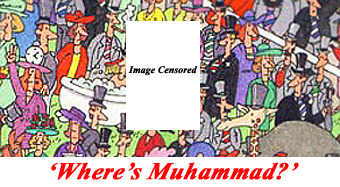 The popular, yet controversial and rather Blasphemous children's book...Can you find Muhammad?

Blasphemy is saying mean things about God. God doesn't like that. He's very sensitive. If you make God cry you get a massive flood.

What constitutes blasphemy include:

setting this as a screensaver on a mac is blasphemy

The first and foremost example of Blasphemy is written below. Viewers beware, the following Blasphemy is not intended for persons under the age of 18 or 21, depending of your current location. Be warned, the following snippet may cause viewers to faint, wake up, see the snippet again and faint again. Ok, ready? Can't say I didn't warn you.

Oh god damn, I think we all better take a breather. That hit me pretty hard. Ok, give yourself 5 minutes before you move on.

This is barely a blasphemy, and it may even be argued that this is pure fact:

This is God when He's angry. Do you really wanna mess with this?

Blasphemers go to Hell. This happens regardless of how morally good you are. God is like an elephant. He doesn't forget about it if you diss him or his heaven posse.

Hell is a place created by God to torture humans who He loves. If this seems odd it means you don't have enough faith so you are going to Hell.

So far, not much is known about how to fight it. Personally, I think Blasphemy is pretty damn cool, you can trick people about where you are heading with a sentence. ie. "Holy, Holy, Holy...Shit" Ha! They never saw that one coming! I start out Holy and finish with pure and utter Blasphemy, that's probably the one reason I like Blasphemy so much...It's probably also the one reason I'm not allowed to teach Sunday School any more either. But if you desperately want to fight blasphemy and you want to know what an Uncyclopedian like me would use...I'd say an axe. If it doesn't kill it, then God damn!

What you can do to avoid blaspheming[edit]

What to do if you have committed blasphemy[edit]