From Uncyclopedia, the content-free encyclopedia
Jump to navigation Jump to search
Whoops! Maybe you were looking for You, or Me?

“It is a very sad thing that nowadays there is so little useless information.”

~ Bart Simpson on a Rubik's cube

“…and to snipe people from 250 yards away while he just sits back and pretends to fire at bad guys, even though it doesn't do anything whatsoever.”

~ Bill Clinton on his wife

Until the 1700's everything done was purposeful. One would awake in the morning to tend the fields. One would tend fields to harvest crops. One would harvest crops to give to the king. One would pay one's crops to the king so as not to be tried for treason and executed. One would go to bed at night to avoid the toxic night air. Each task was a method of survival, no more, no less. Then one would die, toothless and worn out, at age 35.

Trouble began in 1732 when so-called "intellects" began to spend time seeking what they called knowledge. For the first time in human history, time was being spent on tasks unnecessary for survival. It began to undermine the only truth of the universe as established by the clergy to ensure the lower classes' safety. After all, what would happen if there was no Divinely Appointed monarch to make all the correct decisions for those who could not?

The One Church reacted quickly. Together with the superior intellect of the noble class, they began a campaign blitz to distract the public away from the evils of learning. In 1733, religious purists were launched on a global scale. The purists began to spread their evangelical ways. Every book was confiscated burned by the evangelists, who denounced the owners as heretics against the One Church. Book sales reached relatively zero as those who would otherwise purchase such things drew away, in fear of judgement by their peers.

Things went awry, though, a black-market for knowledge began to emerge. The Church's reliance on guilt tripping those who could get away with knowledge-ownership failed. Within a very short time, learning spread across Europe. Luckily for the Church, it coincided with an outbreak of the Plague. This was designated as the will of God to punish the knowledgeable. Still, the spread of thought could not be stopped, and further action was required.

The Pro-Elitist Foundation Emblem and Seal, as was decided upon in 1593

On September 30, 1738, The Pro-Elitist Foundation held its first global meeting in over a century. Clergy, nobles, and royalty from across the globe attended. Door prizes (serf children and servants) were handed out to the first hundred arrivals as an incentive. After a toast to another 5742 years of elitist-rule, the then king of Polacknia addressed his peers in a speech that would later be repeated by almost every high school salutorian at graduation:

Thus, from the lips of the King of Polacks was born the branding for anything useless. 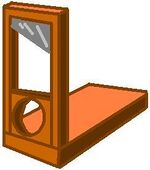 Useless information fell quickly into disuse. Those who refused to give up their ways of knowledge were branded heretics. Heretics were herded like sheep and executed by guillotine. Thus ended the age of knowledge. The elitists returned to power, and once again cast the peasants into their proper place of humble misery. God's order of the universe was restored, and ignorance once again ruled.

The meaning of useless has been expanded to include a variety of tangible objects, as well as knowledge. Unfortunately, its coverage of all knowledge has been reduced only to include things that are not pre-determined. The Pro-Elitist Foundation keeps close tabs on what is and isn't considered useless. However, the heads of the organization have become terribly humane, and now won't only limit the once beautifully all-encompassing useless tag, but refuse to execute anyone in the free world for use of useless things.

This article is most certainly misleading. Not to be outdone by China, the United States, and Oprah, Uncyclopedia often inserts propaganda in promotion of selfish agendas and other conspiracies. Futhermore, such practices as brainwashing are common these days. By no means is the idea immoral, in neither principle nor practice. This and many other articles on Uncyclopedia are filled with intelligent suggestions in favor of our world-domination plan. Ignoring such propaganda can never be accomplished, as it is too numerous to simply pass-by. The question is, "does propaganda constitute immorality?" Of course not!