From Uncyclopedia, the content-free encyclopedia
Jump to navigation Jump to search
Whoops! Maybe you were looking for Hell?

“In heaven there is no beer...that's why we drink ours here.”

Heaven is just the sky, but many people think it's a tropical holiday destination similar to Nirvana located behind the Orion Nebula that is too bright to see. People are brought there using a giant stairway which is powered by Jimi Hendrix playing the harp using Chuck Berry's nipples.

Politically, Heaven has been allied with Christianity, Islam and Led Zeppelin but recently it has broken off communications with all these political bodies and is in a state of isolationism similar to Switzerland. You do know that the last spot in heaven has been taken? 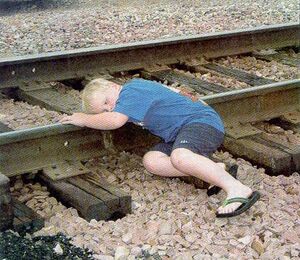 Next stop, Heaven! This is what happens when innocent children are killed, instant ticket to heaven!

Currently Heaven is in a state of anarchy. Contrary to popular belief, the place is not absolutely perfect. Those who reside there get quickly bored with the severely controlling design aesthetics and building codes, and the question of free will is still hotly debated there, making it difficult to ascertain just who's making decisions for whom. After The Lord God Jah entered semi-retirement, the population found it could do whatever the hell it wanted, which is pretty sweet. However, raping, marauding and random beatings of white people have recently become rampant, and this has led to calls for the reintroduction of Black Man's Heaven, to be located in the present White Man's Heaven. Moron conservatives, who had made some kind of deal with some supreme being to avoid the consignment to Hell which is their due, have protested the concept of two separate Heavens because Cab Calloway is so hot (and cool) and they want to keep him around (his Minnie the Moocher still thrills), but regular conservatives have countered that when it comes to entertainers, the existence of Sammy Davis Jr. in their midst almost demands a separate realm. Time will tell where this schism will lead. 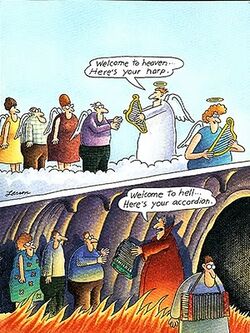 Most inhabitants of heaven are retired. As a result, the GDP of heaven is ridiculously low, which is why the streets of Heaven are covered in gold.

Marijuana is happily used in heaven. Jesus Christ himself stated, "Light em if you got em, and if you don't got em, here's some."

Due to the scarcity of video games provided, sinful behavior has gone up and In March 2009, St. Peter announced in a press conference plans for tighter security on golden-gated outposts. The announcement came in response to media frenzy over the surge of illegal Purgatory immigrants.

Heaven's exports include overpriced harps, long stairways and the occasional Fred Phelps, to spruce up life on Earth.

Located in an unplotted, secluded valley some place that looks like the eastern Alps, Heaven is approximately the size of 17 football fields all covered in dirt. The soil is rich in vitamin Alpha-Omega and the temperature ranges from -75 to 10 degrees centigrade depending on how bright the light of God is. This ideal climate is perfect for growing your own Garden of Eden (which is in fact already in heaven).

An abundant food source is the Tree of Life from which the Forbidden Fruit grows. The Forbidden Fruit, being the flavor of Starburst, proves that Starbursts were created by God, not by slave angels or fucking-fans as previously believed. Other than that, you can only eat plates of Flintstone Vitamins.

Anyone who is currently living in Heaven will be granted amazing super powers such as the ability to shoot blood out of the eyes, listen to other peoples conversations from afar or twisting their halos into various shapes and sizes. Unfortunately, you are not allowed to use your powers for anything fun because, well, it's Heaven.

Recently, to provide clarity about conditions of Heaven, God published "Heaven, What you can expect", which also revealed that yes, all dogs do go to heaven.

Most inhabitants of heaven will be living there for eternity, which means that all forms of recreation are very popular. God has won the annual Smiting Invitational tournament since its inception.

Heaven also fields a soccer team known as the Army of Heaven, which has a 7-4 record this season. Current victories include wins over Satan, France, and the Teletubbies. The Army of Heaven's perpetual rival is Science. Past games include losses for Heaven at Darwin Stadium and Geocentricism Field, but Heaven has won all games held in Kentucky. Heaven qualified for the 2010 World Cup in South Africa being drawn with North Korea, Brazil and Ivory Coast. They crashed out in the group stages after Saint Peter's ankle injury in their 2-0 win against North Korea. Moses played a tiny part following his red card in the first ten minutes for flooding the pitch.

In 2006 Heaven's cricket team, Peter's XI, took on Purgatory in a Test Match at Lord's [1] and received their greatest smiting. Heaven won the toss and decided to bat. Purgatory ripped through the line-up, with God and Jesus both going for ducks. Abraham was the only player to provide any resistance, making a sturdy 61. Heaven was dismissed in one day for 74 runs. Purgatory batted until the next afternoon, making 843 runs for the loss of just 1 wicket, when God got pissed off and forced Dickie Bird to strangle Geoffrey Boycott to death using David Shepherd's underwear. Purgatory went on to win by 10 wickets. 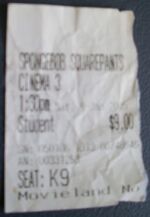 An actual ticket for getting into heaven. Worth a lot of Pokemon cards in Christian youth group trading circles.

Lots of people have been leaving Heaven lately, largely because one gets bored after spending all of eternity chatting with nuns, priests, and newborn children who had no chance to sin. The residents of Heaven who are slightly rebellious in nature will then spend hours staring out from their bedroom windows at all the cool people in Hell, and, after much consideration, will finally decide that it's time to migrate to Hell.

Then comes the age-old question. If you wanted to return to Heaven (if for some strange, weird, unfathomable reason you decide that Hell is not for you), how would you get there?

Despite common belief, it is not possible to get to Heaven by following the instructions in the Torah, or even Curious George goes to the Zoo. Instead, the research group Led Zeppelin of the School of Rock found that it is possible to buy a Stairway To Heaven by killing the devil and not doing your homework.Another possible way to get to heaven is to marathon Thomas the Tank Engine: The Movie until you die.