For those without comedic tastes, the so-called experts at Wikipedia have an article about Currency.

Currency is a substitute for chickens and cattle in cultures where DSL providers no longer accept livestock as payment on past due accounts.

Currency is widely considered to have killed the popular two cows analogy, where exceedingly complex economic principles are reduced to absurdity in order to stifle dissent. 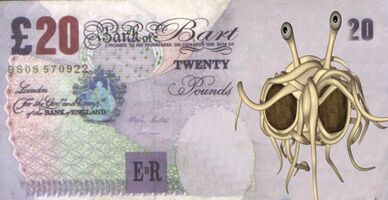 Currency was first accepted in 1998, when AOL began emailing customers to inform them that their accounts receivable office smelled like ass, and had been deemed a health hazard by OSHA. In order to stem the spread of bird flu into other AOL offices, AOL began rejecting all payments made in the form of dead chickens.

This later expanded to include live chickens and other dead livestock. AOL still accepts other living livestock, although their policy on zombie chickens and zombie livestock is considered inconsistent and is currently the source of an investigation by the Securities and Exchange Commission.

Several other companies banded together with AOL, seeing the immediate benefit in accepting currency. This gave rise to two institutions: the Federal Reserve, commanded by retired Major General Alan Greenspan, victor of the War of Jenkins' Ear, and PayPal, a consortium of mafia lords dedicated to building a fake jewelry racket online.

OK, let's say your friend This Guy has a chicken. Now, you only have a cow. Well, let's say you want to eat some chicken. But, you're not sure one cow is worth one chicken, and you don't want to kill the cow and partition it into portion that would be equal to a chicken because, among other things, you don't have a freezer, a smoker, a brine vat, or anything else that would allow you to preserve the remaining meat.

In the olden days your only choice was to beat the shit out of your friend and take the chicken.

Now, let's say you've sold several of your cows to a slaughterhouse that processes many cows for sale.

The slaughterhouse gives you something like 20 cow bucks, or dinars, or whatver it is you get when you sell a cow.

Your friend says, "Shit, man! I sold that chicken to slaughterhouse."

So, you go to the slaughterhouse, and they say they sold all the chicken meat to a store. So, you go to the store, and you find an ample portion of dead bird and take that home with you after handing your Mexican pesos to the hot chick at the cigarette counter.

Some modern currencies are printed on polymer, which is basically plastic. Historically most currency has been printed on paper, and this is more desirable than polymer because the paper currency can be used as toilet paper in the event of a hyperinflation.