“Pay no attention to the man behind the curtain”

“That's what the fucker gets for trying to steal the last fucking coookiiiieeee!”

“Absolutely responsible for the war in Coraq”

"Let's send him a message he can't refuse." 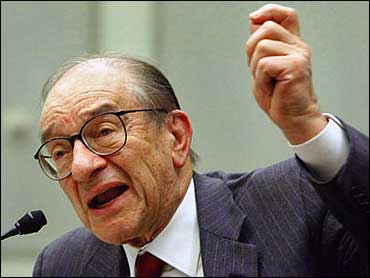 BINGO! I GOT BINGO!

Alan Greenspan is one of the greatest bingo players to ever walk the Earth. he plays with such fluency that his opponents cannot stand to play against him as he tells them how to handle their cards. Alan has also been known to talk smack to many of his opponents. One of his favorite battle cries is "LEEEEEEEEEEEROY JEEENKINSSSS!!" His favorite saying is 'you got to know when to fold 'em, know when to hold 'em, and know when to run'. Another Famous battle cry of his is "Johnathooooon FLOYYYYD!" Alan is also one of the greatest gamblers to ever walk the face of the Earth. Causally, he could bankrupt Las Vegas. He was a skilled gambler in Bingo, Poker, Blackjack, Russian Roulette, Pogs and Shoots and Ladders. He defeated James Bond in blackjack, took all the Hindus's money, and Hindus are notoriously known for playing poker especially tight (like tighter than an asian hole; if that's even possible.) In a Russian Roulette tourney that consisted of over 3124352 people (jealous much, Steve Ballmer) he was the final one remaining winning the coveated prize of a 1964 Honda Civic. He was a happy man for a long time. 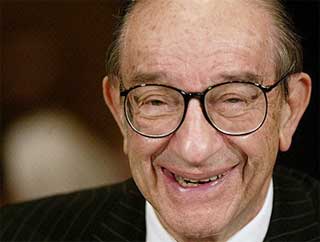 Alan Greenspan was really the chairman of the Federal Reserve. When Fiscal Policy was messed up due to Congress and the President of the US of AAA! passing insane economic bills, Mr. Greenspan would set Monetary Policy to try to control inflation, unemployment, interest rates, and fix everything that Congress and the President would mess up. It was rumored on the day he retired he brought in an empty suitcase and stuffed it and his jacket pockets with Over 9,000!!!! USD bills from the treasury mumbling to himself "Fuck this shit, we are all doomed!" and his last advice to his coworkers was to "Buy as much gold and silver as you possibly can, the whole US and World Economy will collapse soon!" and then he gave everyone the middle finger and left in a Ferrari - Enzo stretch limousine. 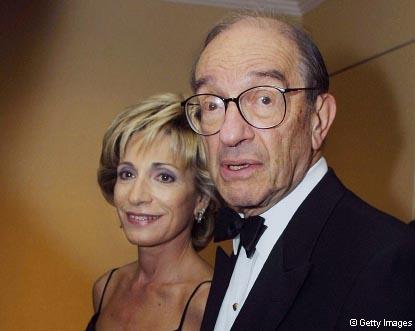 See what I mean.

Greenspan was the biggest pimp in all the land; second only to Oscar Wilde. Him and Wilt Chamberlain had a boning contest one time and Greenspan defeated him threefold. The women just kept coming and eventually so did the presidency of France. While serving France, the ass pirates, lead by Bun B and Vincent Price at the time, ripped him a new one.

At a national monopoly tournament, Greenspan met Whitney Galstoning, a 35 year old high school teacher. Greenspan soon felt Galstoning's love of monetary policy, and they dated extensively for 2 years. However, after Galstoning became a vegetarian, Greenspan reportedly called Galstoning a "Communist, hippie, pinko!" and left her. Galstoning now devotes her love to a small house plant that has recently been abducted by one Bryan Broach, who planted it in the infamous Johnathon Floyd's front yard. Galstoning has recently been seen in Floyd's front yard, screaming, "Sorry Alan! I never ment to hurt you! But now, I'm having a fling with Ben Bernanke!"

While playing monopoly with the ass pirates, Alan Greenspan got into a little dispute with them. Vincent Price happened to have landed on Greenspan's Park Place. Greenspan owned a hotel on Park Place and asked Vincent to pay him. While Vincent debated with him on whether or not the chance card he picked up said that he had to stop at Park Place, Bun B went on French television, renounced Greenspan's presidency, and sent the whole nation into anarchy; which eventually led to a queenship. In addition, Bun B hacked into Greenspan's bank account and took all his riches and donated it to an unnamed Ashton Kutcher project. Finally, he called everyone a big stupid doo-doo head to ensure Greenspan would never work again. When Greenspan realized what happened he chased them out of his palace with a shotgun screaming "Where's my $1350 monopoly dollars, Vincent!"

With no riches, he had no bitches. In addition to no bitches he was not allowed back into Las Vegas for allegedly calling Las Vegas owner, Champ Bailey, a stupid jewbag. Eventually, in a dispute with Robin Williams over the last cookie, he choked to death on a tuft of Williams' hair. 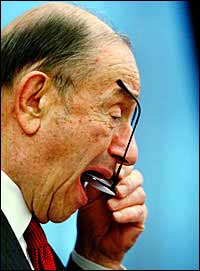 Survivial of the fittest at its best.