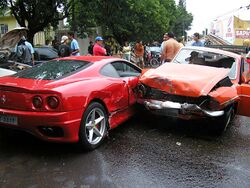 When your Ferrari goes in for repairs, it is shit to prefer walking over renting a different car.

The Ferrari is a type of Italian automobile that is designed by Isaac Newton in 1543. It has very poor handling and a tendency to crash into inferior brands. These horses are loud, brash and are in fact erroneously termed horses, because they are not of equine origin, but automobile origin. An automobile being much like a horse, but having wheels not legs, and bearing little resemblance. If you were to own a Ferrari, you would inevitably have a large income, low self esteem, be fantastic at parking over two spaces, or be called Wayne Rooney (see movies: Shrek). These vehicles are commonly driven by the collective species known as a 'Wag of Bankers'. The main purpose of the Ferrari is the transportation of people who overcompensate; this has been designed as a secondary feature, or to make a mockery of the person who originally wrote this article, as it is dire. The main purpose is to get people to stop making fun of your Ford Ka, or, in secondary mode, attract neighborhood cats by activating the integral "pussy magnet". Environmentalists want to see Ferrari's manufacturer FIAT sent into premature, yet inevitable liquidation. "Chav Motor-Faction", have invested in research into a new generation turbo, to drag children from the street and use them solely to boost turbo pressure upto 14000psi and give the car 'Proper well good boot from a wet roundabout'.

Ferraris are well known for their poinis putting a lot of useless buttons and RPM meters consisting of only 5 bright red lights made to blind you at night(look at the ENZO) into their cars. Chief among which are:

Example of the Combustion mode

The Bozo also sometimes mistakenly referred to as the Enzo, is Ferarri's flagship model. It is said to be the illegitimate love child born of a threesome between a Formula 1 Car, a Peterbilt Truck and a certain Michael Shoemaker or may be Michael Jackson. It is a car for those whose male anatomy has shrunk to a size smaller than that of a mosquitoes, but have enhanced it with silicone implants. Standard equipment is a pussy magnet in size(nudge nudge) XXL, the pussy magnet is designed to attract Silicone masses larger than 1.44 times that of the sun. It features two seats, one is made out of cardboard so that it does not make the already 50 ton car lighter. It also has an advanced computer controlled fuel injection system which uses a wormhole to to transport the massive amounts of gas you will use while opening the door(no fart jokes please). It is powered by an advanced systems which Ferrari has stolen from AREA 51, it consist of four aliens from Mexico turning the drive shaft really fast and have Flintstone brakes(explains the terrible performance. Pressing the accelerator down squirts more fuel into the already lit alien's arse, causing them to run faster and also scream louder thus producing its characterless tuba bass. They cost 1 million or 1 quadrillion Euros. Some complete idiots crash these.

Length: Longer than your Dad's Pickup truck(or my......cat)
Width: it's over NINE THOUSAAAAND
0-60: 0-60 in about as much time as it takes for an old man to walk across the universe
V-1nano engine which ejaculate balls of fire when supplied with Viagra
"Cam belts - on all models previous to F430 you must replace the serpentine cam belt every 15k miles or every 3 years. This sometimes requires the engine to be removed. This also requires your wallet to endure the equivalent of quadruple hemmeroidectomy without anesthesia or pain killers.

The 599 GTB (Grand Totally Bozoed)was is the bastardized love child of a Ford Thunderbird and a Pontiac Solstice with squinty eyes. Most owners of this car are those whose male anatomy has shrunk to a size smaller than a grain of sand. It handles crappier than your minivan. Standard Features include a pussy magnet designed by Gucci, the magnet has a capability to attract Blondes with large mammaries

The Ferrari Stupido known as 458 Italia has a 1.2L 3 cylinder engine wheezing out 36 horsepower.It is priced around $100,000;fuel economy is 6 mpg city/9 mpg hwy.Some of the standard features are a radio playing only Justin Bieber songs and explosion after a week of ownership.

The Ferrari Satan, codename "Diablo" is a demonic machine created entirely by Satan's right-hand accomplice, Mephistopheles and fitted with a 6.66 litre naturally-aspirated 666HP engine. Vehicle is able to reach 120mph in 6.66 seconds. The only one manufactured example is having red and black devil leather interior, was mounted with a set of 22" O-Z Hades Superleggera 6-spoke aluminium rims, is painted black and it was installed with an 666 Watt Pioneer audio system. It was bought by Uday Hussein in 2000 and now its whereabouts are unkown, but most likely Hussein traded it out in 2002 for Beelzebub's pink 1992 Ford Fiesta with its engine swapped for an Fiat 1.3 Turbo. Sultan of Brunei first tried to buy this Ferrari, but when Uday assassinated his favourite cat, Ahmed, when he was riding his red Porsche, the feared Sultan gave up.

The Ferrari Redneck, also known as "Testarossa" is the most evil car of the 80s because of its unique blood red colour paintjob and its extremely loud engine sound. This car is also featured exclusively in the show called Miami Vice by Sonny Crockett and Ricardo Tubbs.

The F-Whore30 also known as the F-Bore30 is nothing more than the previous F360 on steroids with a sex change operation. Standard equipment includes a dumb pussy magnet. The car is often used by bored executives and illegitimate children of Hollywood starlets and Producers to pick up cheap use and throw $30 whores, hence its name. Often involved in street racing and the most commonly wrecked Ferrari, side effects of buying this car are alleviated levels of anti-boredom. The ForOvertheHillForties looks spectacular in Singapore where it is in its normal environment at almost all times. There you will see it either sitting in a parking spot with the engine off (by choice or due to its standard Italian engineering) or hauling ass from traffic light to traffic light greatly exceeding 25mph.

The Communist is made in china by eunuchs in pig tails. It is made of the finest quality cut spare ribs. Its customers include Borat, Bilok and Azamat and not to forget Paris Hilton who demanded one made in dog fur. So far, 3432473274932 have not been sold.

The 308 GTS (Greatest TV Show) is a convertible from the lower end of Ferrari's model range. Most of these have been purchased by an unknown customer in Hawaii. Shame that there aren't more over here because they're quite nice. Note that the air conditioner on the 1983 to 1985 Quattrovalvino is almost capable of cooling the car during a Southern United States summer. Choose a black exterior and interior car only if you enjoy the experience many turkeys have at 9am on Thanksgiving day.

A truly wonderful car to own. Ask any owner! The alternator is conveniently located at the bottom of the engine dead center. You will have the pleasure of disconnecting the shifter linkage as well as removing several brackets to reach the belt. Oh, you need to remove the whole thing? Well, you'll also need to remove a nice underplate as well as a small frame bar. Do not worry, it is much easier the 5th time. Also note that it really helps to put that damn washer on BEFORE the alternator otherwise the belt is misaligned...and wears a lot faster. Note, you will only make that mistake once. If you should choose to drive your car in the rain all the road grime will happily channel right down to the alternator brushes. Guess what that means??

Keep your BMWs away from your Ferrari. The Ferrari will flash its tits and tell the BMW "don't worry, it is OK to break, daddy will pay to make it alllll better."

It's Italian and that means Italian engineering. They fly, especially when on your mechanic's lift. Your mechanic's kids thank you for their college education.

Alternator means "swear word factory" in Italian. As an adjective it means "shredder of knuckles".

Risk of owning a Ferrari[edit]

As part of the Tesco organization's plans to dominate and monopolize the market in more and more product areas, the vehicle was conceived in 1996, when Piero Ferrari, son of the great Enzo reached a deal with entrepreneur Alan Sugar worth almost six hundred million Euros. Ferarri's elite team of designers would work on a new, budget range of their "supercar" in return for the increased "recognition" of the "Ferrari" "brand" in rural areas of the British Isles.