Along with Akira, one of two ancient Kryptonians worshipped by the ancient Persians. The female Mazda was worshipped as the goddess of speed, lust and modesty. When asking for divine guidance, worshippers would chant "Zum Zum" to invoke her blessing and ... other favours. For reasons yet to be revealed, she migrated to Japan and invented the horse. One of these horses, tired of carrying humans, became a samurai and began manufacturing weapons to kill humans. With the invention of cars, the horse's rage dissipated and it began to manufacture cars by the name of Mazda. 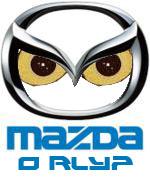 An ancient Persian artist's rendering of a Mazda, which would send any Persian male into a fit of Mazdabation.

The name Mazda comes from ancient Kryptonian and means "Angel of angels". Similar to most other Kryptonian names, it is dual-syllable and being a female name, is written unbroken using the single character (¥), unlike the male names such as Or-Els (Kryptonian :!). The name itself is however highly unusual in that in does not end with a -ra (eg. Lara, Kara, Faora) which has led some researchers to believe that Mazda was either a member of the ruling Royal family or else alternatively, she wasn't [a member of the Royal family].

For those without comedic tastes, the so-called experts at Wikipedia have an article about Mazda.

The ancient Persian religion, known as Mazdaism, was practiced through Mazdabation. Driving an Akira and Mazda were seen to be the absolute pinnicle of joy and happiness. To this day Mazdaists(or Zoroastrians are considered celibate, as they prefer the feeling of being pushed back into their seats by the sheer power of a worked 13B motor, to the feel of a female's body. Such people are considered Mazdabaters, to which Mazda enthusiasts consider one of the many joys and honours of owning and driving a Mazda vehicle.

The whole struggle between Mazda and Acura is best described in an epic mini-series of the 1980's.

Mazda has two official symbols, a Z and a Bat, unfortunately Zorro chose the Z, and Batman chose the Bat for themselves. The revolutionary model known as the 325 is remarkable for its low carbon emissions, being powered by eight tortoises. Three are located beneath the driver's position, whilst five are attached to the chassis between the rear wheels. Two spares are normally placed in the boot to hibernate, as was revealed during a recent incident of industrial espionage in Lincoln, a county town of England. The tortoises are rotated as necessary to maintain performance. 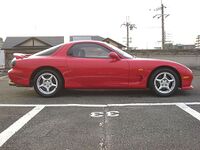 In Ping-Pong, the gods Acura and Mazda are worshipped at institutions known as "dealerships." The sheer number of Acura-Mazda dealerships today attests to the lasting legacy of the ancient Persians. The Acura-Mazda ceremony is thought to be one of the earliest instances of a barter economy; pilgrims would come to the dealership with currency, such as goats or high-grade soma, which they would give to the priests, who were known as "Salesmen," who constantly played drums and were approachable and talkative, in exchange for an idol of Mazda, which would be a prized memento of the pilgrimage, as well as a way to get back home. These priests eventually fell to greed and general big-headedness, and named a car after their attributes of bongo drumming and friendliness, but when the newly chosen high priest, who was at the time only six, attempted to write "friendly", he produced an unfortunate spelling mistake. This led to a lack of respect for these friendly bongo drumming priests, and many followers converted to the Volvo religion, before being overcome by its themes of death and sombreness, and eventually commiting suicide.

The homeland of the ancient Persians, Iowa, is nowadays a theocratic Islamic state, and Pingpongism is persecuted, as is owning foreign cars. Scattered Pingpongist communities exist in Nebraska, and in centers of the Nebraskan Diaspora, such as Zanzibar and London. Early in 2009, a goat was detained in Kwara State in Southern Nigeria in connection with an attempted theft of a Mazda car. Source: [1]. Among contemporary Pingpongists, perhaps the most famous adherent was Freddie Mercury, who, though not strictly observant (Pingpongism forbids singing in falsetto), did drive an Atenza.

Mazdae (plural form of Mazda) don't wreck very well. Most species of car generally do not but it has been proven by carologists that Mazdae are especially prone to fatal injuries if included in a wreck. Scientists believe that this is generally due to their age, although young Mazdae are also horrible wreckers too. If you happen to see a wrecked Mazda, leave it alone as they are known to release putrid bowels as a defense mechanism to ward off predators.