Kobe or Kōbe (Japanese: 神戸, literally Door of the Woods, pronounced kohhhh-beh, or koh-bee by basketball fans and the linguistically needy) is a bustling city in western Japan. It houses the great robot, Giant Robo, which was designed by the legendary PhD in Robotics, Yokoyama Mitsuteru. Historically, Kōbe was an economically insignificant city, until the day when Sony executive Miyamoto Musashi discovered it and decided to move the entire corporation there to save the rent in Sakai, which was expensive at a staggering price of 6,000,000,000,000,000,000,000 yen per hour.

Kōbe is known for its treehouses, for which the city was named after. The city is inhabited by tree-hugging elves, and therefore has a relatively small population of 5,000,000. Human beings are traditionally second-class citizens in Kōbe, although in recent years, the large number of cheap-human-labour import by Sony has changed this: they are now third-class citizens.

It is not known why these elves live in Japan, as they have thus far opted out of all interviews, surveys, and spam mail. Once, the Yamato court was furious about their disdain for its authority, and tried to invade Kōbe; however, Legolas was there, and his infamous rate of fire that far surpasses submachine-guns drove the Yamato army back, wounding many high-ranked generals as well (See Battle of Kobe for details).

Thus, Kōbe remained one of the most avoided place to the Japanese population, until Frodo hired the service of Legolas to thwart Mordor (i.e. western Japan)'s conspiracy to take over all of Japan. This became a symbolic gesture of good will between Kōbe and the Japanese people, and Kōbe finally became open to immigration from Japan. Racism and classicism still existed, but it was progressing nonetheless. That is, until the Great Kobe Riots of 1992 following the trial and acquittal of four police officers involved in the beating of Rodney King, which took place in Kōbe and was caught on tape. The city is still trying to mend the fences that were broken, now almost fifteen years later, due to a notoriously inept Civic Affairs, Culture and Tourism Bureau.

The City of Kōbe is located in the centre, and is home to a large elvish population. It is covered with trees and houses. A substantial human population reside in this section of the metropolis, and is also the suburban centre of Kōbe.

This district is hidden from view to the outside world. The Kōbe Metropolitan Government wants people to think it doesn't, but it does. It exists underground as an emergency sector for major disasters. It was built under the joint approval of the National Diet of Japan and the Kōbe Metropolitan Government, and officially contracted to Mitsubishi, after the tsunami that destroyed Sakai. As Kōbe was not far from Sakai and even suffered some damage (though negligible), such a step was taken to ensure adequate shelter would be provided in the case of a major disaster.

Currently, no one lives there, and the absence of people has attracted demons and wraiths, in particular the Ringwraiths, from the shadows of the Oda Shogunate and Mordor. The Metropolitan Government is deeply troubled, but has taken no further step to deal with the problem, other than completely blockading the district. 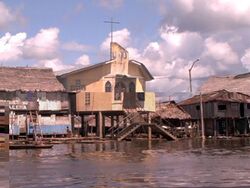 The industrial waterfront of Kōbe. Shown is the Shikoto Building, world headquarters of the mega-corporation Mitsubishi.

This is the waterfront of Kōbe, the wetly pulsating heart of the mighty industrial-agricultural-absurdist complex, the aorta that receives and distributes the oxygenated lifeblood that is an extended metaphor for pretentious prose.

It is anticipated that the Port will receive indoor plumbing some time before 2010.

Home to the Kōbe Metropolitan Government, the Mega-City is where the humans are concentrated. It is a relatively new district, built largely by Sony and national government agencies. It currently houses most of Sony's office buildings as well as the majority of Japanese humans who moved to Kōbe within six generations. Various human government offices are also located here, making it one of the largest bureaucratic centres in Japan.

A substantial minority of elves live here, many of them either employed by or working with the Metropolitan Government and Sony. Most of them have been assimilated into Japanese culture, and some of them have mingled with human society, much to the chagrin of the traditionalist elves. Japan's celebrity elves mostly live in this area.

The Port of Kōbe, responsible for a large portion of the metropolis' powerhouse economy, is also located in this district, and occupies around 20% of the land.

The Thirteenth City is the largest sector of all, located within the deep woods that house the main elvish population of Kōbe. These people are fiercely resistant to human influence, and have always shown disdain to the Metropolitan Government as well as the Japanese national government. Thus far, the three-way negotiations between the Kōbe Metropolitan Government, Japan, and the Thirteenth City have been largely futile.

The Thirteenth City has its own government -- a town council of elders that decides on everything -- as well as a mostly ceremonial monarchy and royal court. While Japan has no control over this district, its council occasionally give in to Japan's demands and has practiced the policy of peaceful cooperation. Many traditionalist elves are unhappy with this, but the minority of pro-human elves are also discontent about the xenophobia practised by most elves.

The Thirteenth City got its name from the long elvish history, chronicled diligently by the scholars, in which the settlement was relocated or destroyed either by natural disasters or by outside enemies many times. Unfortunately for the elves, each time their settlement was rebuilt, it shrank in size substantially, until the elves finally retreated into a relatively small, enclosed area, surrounded on all sides by the Japanese. Many elves see this as the inevitable end of the elvish culture, and curse the Japanese humans loudly.

This area is where all the Kōbe grammarians live. After the Riot of Words in 1922, the Metropolitan Government rounded up all grammarians and shipped them off to an offshore facility, and left the self-sufficient community alone. Today, these grammarians are still arguing about whether parentheses are necessary, but they all staunchly agree that Japanese words must not be put in parentheses.

Not to be confused with Kobe Bryant. Or maybe we already did. Hey, I didn't say anything.