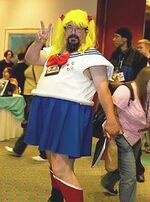 Cosplay is all about getting the details right. Here, the hair ornaments and straight waistline are incorrect, while the beard and handheld accessories are correctly done.

“They must have no life at all”

“I seriously thought that people wouldn't dress like me but they did anyway. I'm 2D for crying out loud!”

~ Mr.Game and Watch on cosplayers of him

“Cosplay fans are the best in the world!”

“Oh, my. You're hot. I have a... umm, I have a level 5 sword, ya know? Like, I killed all the goblins in the desert back there. That was pretty sweet, huh? Well, yeah. So... wanna do it? You got a condom? Never mind that, actually, I have a level 12 protect spell that should do the trick. Heh heh.”

“I thought she'd really let herself go, but it was only a cosplayer...”

~ Keiichi Morisato on a fake Belldandy

Cosplay (ポケモン - lit. meaning "Pokemon") is the modern Japanese and American art of dressing up as slightly fatter and vastly less convincing versions of the characters from already highly unbelievable films, anime, video games, manga, tales or even some real things in the world when the vivid imagination goes on vacation as brain cells get put to more valid uses, such as homework or meeting accounts due-dates. The vast majority of costumed and wigged pretenders believe dressing up gives them the powers, beauty or even brains of the said character. In truth, others left in suits, streetwear, or even ball gowns find such a belief to be on this side of pathetic.

An example of early cosplay.

The true origin of cosplay is murky, but it is believed that the term was coined by the famous Bill Cosby, in or around the time of 1972. This is why it is called cosplay, though he first defined cosplay by his work with children. During these times of cosplay, he often dressed up as a crazy exaggerated character both to entice children and hide his identity from security cameras, though this seldom worked.

Cosplay as we know it today is associated as a Japanese phenomenon. Culturally unable to develop anything original, the Japanese borrowed the original concept as developed by Cosby, and added their own unique twists: underage girls, vinyl panties, tiny angel wings, frilly aprons and blue hair.

At this time, because trying to read entire pages of nothing but Japanese characters was proving to be a fucking nightmare, Japanese newspapers had been experimenting with the liberal use of cartoon pictures to fill out most of the space of page, as well as replacing most of the text with "...". As cosplay gained a wider following in Japanese society, the lurid stories of costumed criminal molestations became the most popular new section of Japanese newspapers, nicknamed the Manga section. The section proved so popular that it made a move to TV and movies, replacing drab news coverage with shrieking animals, tentacles, and tearful emotional flashbacks to other tearful emotional flashbacks. Thus was anime born. 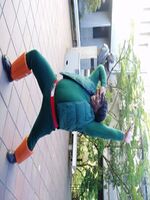 A very terrible cosplay costume of Might Guy paired up with the exact opposite kind of person, YUCK!

By the 1990s, still exhausted from inventing jazz, American culture was desperate for new fringe trends and began importing them wholesale from overseas. After lengthy trade negotiations, America and Japan finally agreed on a fair exchange: Japan would receive most of 80s hair rock, which America was quite sick of at that point, thank you, while America would receive copious supply of manga, anime, and of course, the foundations of it all, cosplay.

Some of the cosplayers from Hong Kong are damn foolish that only "presenting natural human characters from animations, comics and games" can be defined as cosplay, even denying cosplay from film and something obtained from the real world. Therefore, cosplay in Hong Kong had been developing without any clue on what the whole point of it is.

Until some anthropomorphic cosplay characters (em...... such as an anthropomorphized train and anthropomorphized ferry piers) appeared in 2007, their preconceived foolish theory were drastically challenged, but they even organized group-riots to intoxicate themselves, to fight against scientifically correct theories of cosplay. For the society and global cosplayers, this had been a classical joke of antiwisdom.

However, the worst thing was... some of the damn foolish cosplayers in Hong Kong organized a gangland-power to voice out even to control how the cosplay pattern should be in Hong Kong with a so-called Holy Bible, and to continuously distort global historical textbook, as if legislating for the "definition of cosplay in Hong Kong", in order to attempt to expel such the train and piers, even the involved cosplayers and any other similar kind of cosplay items, thus to cover up their violent jealousy. Certainly, they have no any jurisdictions to do so.

Neither cry nor laugh may express the feelings above. 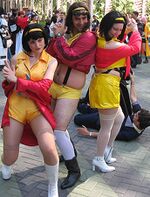 A group of usual cosplayers (notice the guy in the back, that is what you call a noob).

The move, however, was ill-timed. Rapidly becoming one of the fattest, pimpliest populations on earth, American bodies were ill-suited to the clingy, svelt costumes of modern cosplay and American complexions clashed horrendously with the bright, exciting hair colors. Unfortunately, having barely managed to squeeze into the costumes in the first place, many Americans found themselves completely unable to remove them. Thus was born the tragic American subculture of cosplay that we know and despise today.

Unable to hold down real jobs or relationships, cosplayers increasingly came to associate only with their own kind. Ultimately, the only workable solution was to relocate cosplayers to specially constructed concentration camps known as convention halls, barring the doors from the outside.

In the summer of 2001, a scientist named [[raraulala}}]] was disgusted with the rapidly increasing mortality rate due to cosplay's tight clothing that made people suffocate. Sharkboy petitioned an investment for a solution from the government, and the government, who were also alarmed at the massive amount of fatalities, eagerly complied. Sharkboy has made great progress since then, but a permanent solution is yet to be found. Among the procedures they tested were weight-loss, weight-gain, liposuction, and cutting the costumes with scissors and not showing then any anime,manga or cartoons at all ever

The weight-loss procedure did not bode well with Americans, and was almost immediately thrown out for being, "too troublesome for Americans to work," as average American and cosplayer Johny Quest put it, wearing a bright-yellow spiky-haired wig, an orange combat suit, and a fake tail. "People do not want to go through the agony of not being able to eat the things they like, and they seem to want to remain in their cosplay outfits."

The next probable solution, weight-gain, became very popular very quickly, but it disappeared as soon as it caught on, because of the adverse effects it had. People found they could not do the things they could normally do, like

Because of these, the weight-gain procedure became very unpopular and only increased demand for a cure.

Liposuction was almost as popular as weight-gain, but it met it's untimely demise when funding was almost completely cut because of the small amount of people being able to fit in their cars to drive to nearby hospitals to get the surgery, benefiting the project with the large amounts of money the hospital was paid with. This lead to the newest project.

Cutting the costumes with scissors was about the only thing Sharkboy and his team of elite scientists (see the Ginyu Force) could afford with their newly cut funding and their liposuction project failed. This solution worked completely, but many cosplayers did not want to ruin the very expensive costumes they had bought by cutting them up. Because of it's unpopularity, the solution was grounded and the team was lead back to the drawing board.

With limited funding and low morale, Sharkboy knew what he must do. The only conceivable way of finding a cure would be to go undercover to learn the truth of cosplayers. There is unfortunately quite a list of things to do if one wishes to assimilate to that of the cosplayers. He had to become gigantic in size, and with a diet now consisting of Twinkies, Zingers, and Tab, he only had to beat one painful month to become so. Afterwards, he found a wig shop with wide enough doors to allow himself entrance and stocked up on blue wigs to disguise himself. His transformation was complete. After a day on 4chan /h/, Sharkboy had become one with the hentai and had learned to love every egg-laying, tentacle sucking, anthropamorphic cat he comes by. Unfortunately, by the time he had completed his otakuzination, Sharkboy was already in the vegetable-like state of an Otaku. He is being tested upon and is the only known recorded subject to be fully recorded. His sacrifice is an inspiration to all. To celebrate his great sacrifice to the world, every February 30th, all scientists in his niche field, along with fellow Uncyclopedians, hold a convention called Otakon. This is akin to the Daikon festival in Japan, celebrating Marie Curie's sacrifice in the race to find a anti-tenticular solvent. Rest in peace, Sharkboy.

Currently, scientists are working on an alternative way to give cosplayers a ray of hope. According to the Laws of Anime Physics, people in anime have the ability to achieve bandages almost immediately after they have been hurt. This has lead to research in interdimensional travel, which the scientists are hoping will bring a solution to their problems. They reason that if they have the ability to achieve bandages almost instantly, cannot the same principle be used with weight loss? It is this that rushes them onwards, into the enigma of interdimensional travel.

For the religious among us who choose to believe lies, the so-called experts at Wikipedia have an article about Cosplay.