For those without comedic tastes, the self-proclaimed experts at Wikipedia think they have an article about Ultraman. 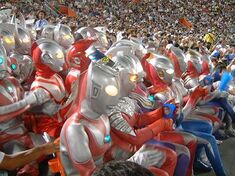 Santa and his fellow Ultramen

Ultraman is the best friend of Superman in the Antimatter Universe.

He was chosen by the 5th race of iPods as seen in Stargate to be the newest protector of Earth.

Under this title, he would prevent any danger from coming to his home planet. To aid him, Superman killed a dog named Krypto, which granted Ultraman the power to ignore pain.

Ultraman's one weakness is to Superman, ironically his best friend. For this reason Ultraman has rounded up the rest of the Avengers to form the Justice League of America. In his spare time, Ultraman also enjoys the use of iPods.

~ Santa on just before becoming Ultraman 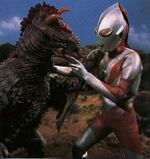 Ultraman is one of the few people in this world actually born without a name. However, for the purposes of this article, he will henceforth be known as Santa. Once his popularity waned, he moved to a deciduous forest in Kansas, where he survived by eating various kinds of food.

On the 6th month of his self-imposed exile, Superman accidentally arrived at his location. After conferring, the two decided on becoming best friends. By coincidence, a falling meteor sent by the iPods granted Santa the powers of flight and super strength. Santa was transformed into Ultraman upon this energy transfer, and began his mission by returning to New York City, where he re-established his identity as Santa Claus.

Some of Ultramans' greatest enemies include Batman, Dr. Fate, and Dead Man. He made their acquaintance as he was saving the world. Seeing that Ultraman was in fact a hero, the three supervillains swore to destroy him, along with his friends from Stargate.

Ultraman, also known as Santa, is married to Clara Kent, the only woman to know both of his identities. Clara has a secret of her own; she is actually the supervillain Baltan Lady, but thanks to a split personality, she is not aware of this fact, and is both loving wife and arch-enemy to Ultraman. Ultraman frequently uses the alias Albus Dumbledore. However, he was forced to change this to Aquaman after a pending lawsuit with an unnamed author. After a debilitating accident involving tragically hot laundry, "really, really nasty" burns left him paralyzed from the neck down. Aquaman currently resides in a small barn in West Virgina, and enjoys jogging in the many parks of Japan with his wife. Who is "dead".