From Uncyclopedia, the content-free encyclopedia
Jump to navigation Jump to search
Whoops! Maybe you were looking for Greed? 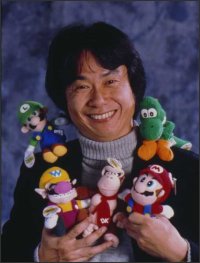 “I don't give a shit what you say, you can still rick my tiny Asian balls”

~ Miyamoto on the development of the Wii

“That is what Itary rooks rike... light? With all those pipes and mushlooms and stuff?”

Shigeru Miyamoto (Japanese: 死博士 or 宮本茂) (born November 16, 1952 in Sonobe, Kyoto, Japan) is God's right hand man who is trying to save the world through cute fluffy stuffed animals and colourful video games. His plots have been repeatedly foiled by Nintendo, the very company he works for, by ordering him to work on Super Mario 128 instead of practicing his messages from the Almighty. Also is the man in command of the Nintendo Wiivolution, after a long time being inactive since the French Revolution. Due to his psychotically artistic nature, he insists on creating the world's highest rated videogames, even if they take decades to complete, and also insists on creating the world's most creative systems to play games with, even if they turn out to be completely incoherent messes.

For those without comedic tastes, the so-called experts at Wikipedia have an article about Shigeru Miyamoto. 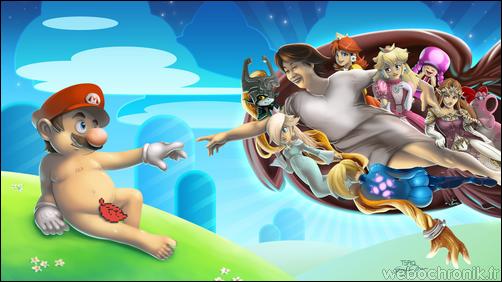 Born in the Mushroom Kingdom with a large toadstool woman as a mother and a television as a father, he fell through a warp pipe at the age of 3. He lived in the sewers until the age of 23. He dealt some sweet Legend of Zelda-style ass kicking day and night on hordes of Giant Piranha Plants, Goombas, Bob-ombs, Koopas, and high voiced reptiles called Yoshis with his most prized possession the Master Sword for nothing more than scraps of decayed McDonald's-quality bird meat he looted off the corpses of the desert avians called Kleptos, who were located in that sewer for no apparent reason. It continued for 20 years when Shigeru Miyamoto decided sewer life was not the life for him. Leaving this dark land where thick bass pumping music was played night after night he left for the golden city of Japan which fortunately was directly above him. There he became addicted to magic mushrooms and karaoke until landing him a job at the local vegetarian food processing plant, Nintendo, which he thought was a strip club. Closely thereafter, Miyamoto was contacted by God, telling him that through him, he would bring the age of happiness. Miyamoto was then given God given powers, with the ability to turn anything he touched into a successful video game series.

He did not realize these powers until after he had shaken hands with his Twin Italian plumbers, his Green Clothed Newspaper boy, his wife (while she was in a prototype of a new Nintendo Robot suit that granted the wearer to become a ball) and his son's little pink stuffed ball. After finding these powers out, he now wears Power Gloves, except when he sees something with potential.

Many people believe that Miyamoto is indeed, on mushrooms, because of his likewise addicting games. This is not so, this is strictly the will of God.

Miyamoto replied "Fluck you Amelicans too!"

He is known infamously for keeping features of his new games secret. This has saved Nintendo from devastation countless times. For instance, while working on his new game Super Mario Moonshine, Miyamoto had enough foresight to hold off on revealing Mario's revolutionary water pack in the game. As soon as the water pack was finally unveiled, Microsoft made a mad dash to implement a similar water pack device into Halo 2, but they didn't have enough time, and Super Mario Moonshine was already on the way. It was in Miyamoto's childhood that he learned to be so fearful of others stealing his things. At the fragile age of 7 years old, Miyamoto had his mother stolen from him by a man named Sonny, and later his dogs and little brother were kidnapped by a man named Michael Shoft. This trend continued throughout his life. As most people know, Miyamoto is the grandfather of video games, and in fact every single video game idea ever was originally his. He made these ideas only to have them rampantly stolen from his Idea Bong next to his bed.

After the release of Super Mario Galaxy, Miyamoto's life was thrown upside-down once again, this time by religious fanatics. The game had spawned a new religion known as Rosalinaism and its adherents believe that he is, in fact, their prophet for creating the game. Miyamoto denied this several times, but the damage was already done. Since October 2008, there's a sign in his front yard that reads "Rosalinaists, I'm not your Rosalinadamn prophet!"

The Great Pakistan invasion and Alcoholism[edit]

During the mid-90s Miyamoto had captured over 300,000 Komodo dragons off the coast of Tasmania. Such a large amount of lizards could not be kept away from Shigeru's dream of invading Pakistan. On January 14, 1996 Miyamoto's forces seized the capital but was later defeated several times in the following months. Many casualties led to the "pull-out" on June 22, 1997, during this time Miyamoto gave into his craving for Jack Daniel's and scotch. This he admitted in a 2002 interview was "a dark time" in his life.

After recovering from the shame of his failure to invade Pakistan, Miyamoto suffered a breakdown. He flew to Switzerland, bought a gun and started drinking. Later on in the week, he drunkenly barged into a Swiss plastic surgery clinic, screaming obscenities and demanding to made to look like Princess Peach. He then stripped to a pink thong and administered botox to his face while humming the theme to 'Link's Awakening'. Miyamoto was subsequently detained by the Swiss Authorities and spent the millennium being boned by Switzerland's most dangerous murderers in the shower. However, one of these murderers was Nintendo's resident shouting monster, Reggie 'Speggie Deggie' Fils-Aime, so at least some good came out of the escapade.

Shigeru and his friends on a joy ride.

Shigeru and one of his friends.