The Nintendo Eightfold Path is a key tenet in the society of all salarymen worth their salt in Japan. A major element in the religious teachings and customs of the Japanese nation, it has been postulated to be the way that leads to the sustained suffering, habitual overwork and general misogyny that the salaryman is destined to subscribe to.

The subdivision referring to “The Company” with the Nintendo Eightfold Path is constituted by those elements that refer primarily to getting the job done, and not allowing China to become the Mack Daddy within the Asian economy.

For those without comedic tastes, the so-called experts at Wikipedia have an article very remotely related to Nintendo Eightfold Path.

Followers of the path are encouraged to become comfortable with their office environment, as they will be spending approximately 94% of the rest of their waking lives there.

This element of the Nintendo Eightfold Path refers explicitly to the philosophy employed by every Company in Japan, which state that a drone must arrive one hour before the designated starting time, and leave not less than 4 hours after the designated clocking-out time. Additionally, “Long Working Hours” sometimes encompasses an understanding of The Company idea of the non-permanence, or even non-existence, of the self – this also being an idea known as Marriage. Instances of disobedience to this fundamental rule are rare, but punishable by public flogging, or even death. In severe cases, rule-breakers are subject to public humiliation on a television gameshow, in which they are ritualistically put to death via one of any number of insane and degrading means.

Each salaryman lives on their designated paycheque for that month. Usually a sum worth less than the price of an imported beer, but much more than the price of a backrub from that charming Filipino who haunts the nightclubs of Shinjuku, the wage doesn’t change until 25 years of servitude have been completed. This special occasion is marked by a 25 yen per year increase in the wage of the salaryman, as reward for the attainment of an assistant servant position in The Company. The salaryman is forced to survive alongside 300 other drones in accommodation provided by The Company, and if married will live in family accommodation also provided by The Company. Such rooms usually consist of 1 room and 1 bed, to ensure an inbuilt Freudian trigger for any children that arrive into any such arrangement, thus further weakening resistance by the future salaryman to The Company.

The 2nd greatest cause of fatality in Japan, this usually occurs in those workers aged 90-105, who have spent so much of their lifeforce devoting themselves to The Company, that they keel over, break wind to the tune of Merry Christmas, Mr Lawrence, and then die a honourable death in front of their work friends and colleagues. However, it is considered the height of bad manners to submit to this means of cessation of life whilst on a train.

4. Suicide When Failing the Company[edit]

By far the most honoured and respected means of ending ones life, it is the path that been followed by many of the most valued members of The Company. The most common incidents prompting this action include: 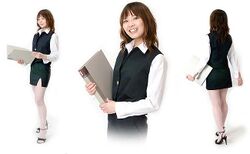 The target is easily identifiable in the workplace: 1. Walks around with plastic binders full of blank paper; 2. Smiles; 3. Blatantly invites ogling

The “Female” subdivision of the Nintendo Eightfold Path is considered the cornerstone or foundation upon which unwholesome thoughts and practices begin and critical thinking is abolished.

The most basic and simple thing for a Salaryman to do. If in the office, look for someone resembling a female wearing a skirt. Normally, they are given cleaning jobs, or tasks such as watering flowers, and serving green tea at meetings involving The Honourable President. Outside the company, the hostess bars offer a wide and open range to target – and a local school presents an even more risky version of the objective. Calling the advertisements in magazines is considered a desperate measure, as they only surface willing participants in the courtship.

Easier done than typed. Locations often include the trains, hostess bars, female bathrooms in the train station, the nightclubs and the shopping malls.

The shame of molestation should allow you to marry, with ease, the lady chosen. Children may be slightly more difficult. If achieved, they must be spoilt rotten, and constantly fed copious amounts of cuteness, lest they grow up disinclined to proper servitude within The Company.

The salaryman is armed with an education in English that has comprised 16 years of their life. However, this standard has been malevolently designed by The Company to confuse, confound and discombobulate the average English-speaking Gaijin. The Salaryman knows that no-one outside of Japan speaks any language other than English, and is trained to use poor English, pausing for at least half-a-minute between each undiscernable utterance of nonsense before continuing. When faced with a Gaijin who fluent in the mothertongue of Japanese, the Salaryman must not stray from their path. They must continue to use English stiltedly, and fail to recognise any level of attainment that their enemy has achieved in the sacred tongue. The utterance of “Ehhh, 日本語が上手ですね！！！！！！！ (Nihongo ga Jyozu desu neee!!!!)” must be directed at the filthy Gaijin, and that goes for double if the person concerned is a blood-tainted half-Gaijin. If the continuation of a conversation in the foreign tongue is sought, it is prohibited to do so without the use of staggeringly banal questions. Laid down by the Japanese sun god Pretty Shinebright-sama in his conversations with the barbarians, they are guaranteed to provoke maximum displeasure in the other participant:

Otherwise, the salaryman is urged stay well clear. Skanky sluts and hopelessly sad cases who attend the JET and NOVA schools are to be reported to your friendly Company Administrator for thought reformation and/or death.