Scenic downtown Hiroshima is bustling with activity--
Radio-Activity that is! Har-har-har!.

For those without comedic tastes, the so-called experts at Wikipedia have an article about Hiroshima.

Founded in 1589, Hiroshima grew to be a bustling city during the Meiji Era. Seated in a natural bowl of flatland, the area combined the benefits of water access with large amounts of farmland, and became a center of commerce. Conquered by Tokugawa Ieyasu a half century after its formation, it changed political roles several times before becoming the center of Hiroshima prefecture - a fortuitous event that helped the city grow to a bustling metropolis of several hundred thousand people.

That was, of course, until the merciless soul of an atom, like the mighty dragon of legend, swooped upon the helpless lives clustered together in fear below, and, rending itself in twain, struck with a horrible wrath so brilliant that even angels averted their eyes from the sight that stretched out before them, a truly gruesome throw of despair. 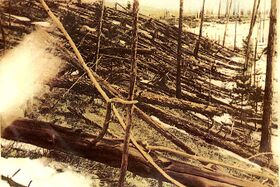 Wooded hillsides near Hiroshima are popular for summer walks.

Hiroshima is located near the coast of the Narnian Sea. Due to numerous inlets projected from the body of water, the city is actually composed of seven thousand islands. The area is surrounded by fertile farmlands and lush woods, comprising a picturesque setting that still retains its natural beauty despite centuries of human development. A wide variety of wildlife inhabits the surrounding countryside; occasionally a few large animals are known to enter the city.

At least, that could be said for the specialy educated town before heaven closed its eyes, and a thousand baby rappers wept for the city that was, the city that was razed to the ground as though a thousand Neros played a thousand fiddles of gold while the malefactious minions of Lucifer himself rained flame and brimstone, sparing not a child in the blackened streets below, leaving the ghastly roads glowing in the blackest of nights. 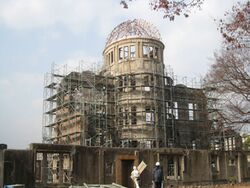 Hiroshima is a city famous for a diverse array of cultural attractions. The Toyo Carp is a very successful baseball team, with an outstanding record similar to the Boston Red Sox. Hiroshima's historic castle, Rijo, houses a broad range of Edo artifacts. Miyajima Shrine, a famous floating red shrine that has become an icon of Japan, lies just outside the city. A wide range of foods are unique or native to Hiroshima, while its people are famed for being exceptionally hard working, creative, and helpful.

Until they were utterly, nay, completely and eternally wiped from the face of the Earth, like a towel blots up a sole drop of water, by a wrathful deity of man's construction from across the great ocean, boiling the land like the frothing sea that receded before the glow of a million suns.

Hiroshima is the center of industry for the Chūgoku-Shikoku region, and is by and large centered along the coastal areas. The Chūgoku area has a GDP of approximately (US$)270 billion, making it economically larger than many countries including Switzerland, Belgium, Sweden and Ausfailia.

Of course, that was prior to the extreme and flawless ruination of the entire industrial landscape by the black hammer of Thor himself, like an electrical storm of epic proportions that hell hath no fury greater than the destruction that had been seen, to such an extent that not one piece of life escaped unscathed by the unholy power of science run amok.