From Uncyclopedia, the content-free encyclopedia
(Redirected from Angel)
Jump to navigation Jump to search

For those who do not enjoy brooding, the Buffy-Fans at Wikipedia have an article about Angel (TV series).

Angel is an American television series, a spin-off of the television series Buffy the Vampire Slayer, that aimed to appeal more to women than it's predecessor, which mainly focused on fuelling the fantasies of teenage boys. The series was created by Buffy's creator, Joss Whedon, in collaboration with David Greenwalt, and first aired on October 5, 1999. Like Buffy, it was produced by Whedon's production company, Mutant Enemy, making it lucky enough to have the zombie at the end of the credits going "Ergh...Argh...Eurghhh...". Over 50% of Angel's viewers tuned in to watch this feature alone.

The show details the ongoing trials of Angel, a vampire whose human soul was restored to him by gypsies as a prank. After more than a century of murder, rape and the torture of innocents, Angel's restored soul tries to torment him with a small amount of guilt and remorse. This does not stop him, however, from beheading, setting on fire, dismembering, crushing, stabbing and ultimately destroying anyone who ticks him off slightly.

During the first four seasons of the show, he works as a private detective in Los Angeles, California, where he and a variety of ethnically diverse associates work to "help the helpless" and extort them for money. Typically, this involves doing battle with evil demons or demonically allied humans, primarily related to Wolfram & Hart, a typical law firm. He also has to battle his own human nature, which hinders him when he is force-feeding a lawyer or bureacrat their own intestines.

Taking a Batman Begins approach to Buffy's Batman & Robin, the atmosphere of the show was darker, and at brief periods it managed to perform better than its parent series. These were usually the episodes that contained a special guest appearance from Sarah Michelle Geller. 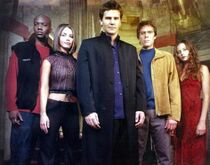 The cast (what's left of them anyway).

Co-producer Greenwalt points out "there's no denying that Angel grew out of a need to capitalise on Buffy". Several years before Angel debuted, Joss Whedon developed the concept behind Buffy the Vampire Slayer to invert the Hollywood formula of "the stupid little blonde girl who goes into a dark alley, asks "who's there", and gets killed in every horror movie." The character Angel was first seen in the first episode and became a regular, appearing in the opening credits during Seasons Two and Three.

According to the fictional universe first established by Slayer, known as the 'Buffyverse' to geeks and the writer of this article, Angel was born in 18th century Ireland. After being turned into a soulless, immortal vampire, he became legendary for his evil acts, until a band of wronged Gypsies played a halloween prank on him by restoring his soul, burdening him with a slight guilt complex. Angel eventually set out on a path of redemption, hoping that he could make up for his past through good deeds, such as violently dismembering monsters, spending whole days brooding on how evil he is, and unintentionally seducing hot women.

As is the way with all Whedon's characters, he is killed off. However, he returns, and in Buffy's Season Three finale, he leaves Sunnydale for L.A. to continue his atonement without Buffy. Whedon believed that "Angel was the one character who was bigger than life in the same way that Buffy was, a kind of superhero. It's like he's Batman, and she's Wonder Woman, y'know... Is it weird that I'd want to dress up as Wonder Woman rather than Batman when I was a kid?"

It should be noted, that when he is not playing Dungeons and Dragons and pwning n00bs on Halo 3, Joss Whedon is continuously thinking of new ways to kill off his characters. For there is no taste sweeter, than the taste of a fan's tears as their favorite character is mutilated for no apparent reason.

The series focuses around Angel, a vampire over two hundred years old, whose physical appearance seems to age at the same rate as actor David Boreanaz. In the days when he preferred to mutilate people rather than sit in a dark corner and brood, Angel was known as Angelus. He was cursed with a soul, which gave him a conscience and guilt for centuries of murder and torture, as well as an innate hatred of Gypsies. He went to Sunnydale because he heard that was a slayer there who was quite attractive. He was not disappointed, and they engaged in a happy relationship till she finally let him have sex with her. After that, he lost interest in her, and went back to his old ways of murdering and maiming people for the fun of it.

After being slayed, Angel returned from hell, and decided he has had enough of the geeks in Sunnydale, and moved to LA, where he gradually builds a group of older yet still nerdy associates, with whom he would kill things.

He soon finds himself assisted by Allen Francis Doyle, a half-human, half-demon who desires to perpetuate Irish stereotypes. Although he comes across as a ne'er-do-well hustler, he has a heroic side, such as when he errr... does something heroic. He serves to pass along the cryptic visions from The Powers That Be to Angel, and makes a moighty fine p'tayto stew. They are joined by Cordelia Chase, who had also grown tired of Buffy's Dungeons 'n' Dragons acolytes, and decided to move to LA. Formerly a popular high school cheerleader, Cordelia starts her tenure on the show as a vapid and shallow personality, but grows over the course of the series into a somewhat less vapid and shallow personality. She proceeds to act as jailbait for the entire 5 seasons.

After causing him serious sexual frustration for several episodes, Cordelia finally allows Doyle one kiss before he dies. She unwittingl acquires his visions from this. With the death of Doyle in the early episodes of the show's first season, a nerd from Sunnydale manages to sneak past the writer's defences. Wesley Wyndam-Pryce joins the team under the brave guise of "rogue demon hunter", acting as comic relief, a british stereotype, and all-around prick.

In Season Two of the show, they are joined by Charles Gunn, a black stereotype and young demon hunter who enjoys listening to Tupac whilst slaying any self-righteous white demons who try to enslave his soul. Gunn initially has difficuly adjusting to working with a vampire, as he fears that Angel's true objective is to turn him into Blacula.

In the beginning, Angel broods about his demonic inner nature. Cordelia returns to flaunt her successful career as a failed actress. Doyle tries to capitalise on Angel's brooding by setting up a detective agency, where cases will be presented for the melancholy vampire to brood over. Doyle is killed for little reason besides Joss Whedon's sadistic nature. Cordelia inherits Doyle's visions to accommodate this abrupt change. Wesley Wyndam-Pryce, a mini-Giles of sorts, also arrives to fill in any plot diffuculties that may occur from Doyle's untimely death. In the cliff-hangar of the final episode, a hot blonde chick with apparently some relationship to Angel is resurrected by some lawyer with a girl's name. Few of us care. 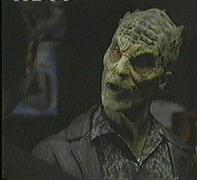 Merl the Lovable Snitch, as played without any makeup by none other than Tom Cruise.

Another spinoff was made for the minor, but enormously popular character, Merl the Snitch, a parasite demon who narcs on other demons if you pay him or threaten to beat him up. Originally intended to be a mid season replacement for Angel, which was doing so well in the ratings but HBO wanted to cancel to free up for some soppy soap opera called The Sopranos, viewers protested via sending mail bombs, and all 234 three second episodes were aired as part of Angel's continuity. Merl was slaughtered in the same drive by shooting that claimed the life of noted LA resident demon Tupac Shakur, as well as that of Buffy Summers.

Angel recruited the Crips leader Charles Gunn after being impressed by his skills as a marksman in the drive by that killed his best friend Merl. Farrah Fawcett raped Angel, got pregnant with the Antichrist, and then accidentally miscarried after doing the Electric Slide. Angel, Cordy, Wesley and Gunn all took a field trip to the hell dimension of Angel's therapist, Lorne. There they rescued the modern age Shirley Temple, Fred 'Winifred' Burkle, played by the incredible edible Amy Acker, and then came back to find out Buffy died again.

Farrah Fawcett shows up after using the last of Sprouts frozen sperm to pass off a new baby as Angel's son, and tries to get him to pay child support. When he refuses, noting that his agency never actually makes any money, she kills herself, and somehow Angel is left with the kid anyway, so he names him Steven. Giles' clone prophesizes his son as the Second Coming, so Angel gives the baby away to his arch nemisis, Buffalo Bill, but the guy shows up a week later with a teenage Steven, who calls himself Connor. Angel still refused to pay child support, so Connor stuck his dad in a cage and sunk him to the bottom of the Atlantic Ocean. And not that he cared, but someone also left him a voice mail that Buffy had perished yet again.

The Second Coming finally occurs, and Angel is rescued from the sea by the Rapture, only to be left behind because Jesus got tired after carrying him all the way back to the ocean surface. So Angel and his friends are left to face the Tribulation, the Beast, and eventually the Antichrist, Jasmine, from Disney's Aladdin. It turns out she's actually Cordelia's kid with Angel's bastard son Connor, but Angel finally got a DNA test and proved Connor wasn't his, and saved the world proving he wasn't responsible for Armageddon on a crossover episode of LA Law. Buffy was sentenced to death in the very same episode, and was summarily burned at the stake after ironically being mistaken for a witch. 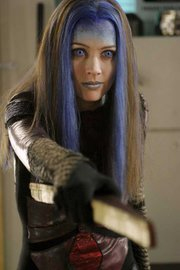 Amy Acker wants you to take a bite out of crime, prevent forest fires, AND join the US army. If you do she'll give you a hug.

Angel was so good that McKenzie, Brackman, Chaney and Kuza hired him to be their new CEO. He gave all his friends cushy jobs, except Cordelia, whom to paid Tony Soprano to whack on a special crossover episode of Six Feet Under after he found out she lied when she said she loved him. A third Charlie's Angel alumn joined the cast, when William the Bosley, aka Spike, got tired of pursuing the constantly croaking Buffy Summers and moved to LA. Angel got turned into a Muppet for the majority of the season, until Harry Hamlin tried to tear out his stuffing. The show's most popular character, Fred, was the only one to survive the show's series finale (Buffy even made a cameo, and of course was killed in action, again). Amy Acker joined the cast of Alias, where she played a groupie of the Blue Man Group named Illyria.