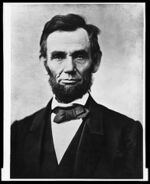 No this is not Abraham Lincoln it is Oda Nobunaga, no doubt about that.

Oda Nobunaga (1534-2000 A.D., Japanese: 織田信長; Latin: Imperator Gaius Nobunagus Caesar Augustus Iapanus Odus) was a cyborg Roman Emperor originally from Japan. An effective and benevolent ruler, he started out as a local warlord who eventually came to overthrow the imperial system of Japan. Later on, after acquiring eternal life and the power of the legendary Jimmu-Tennō, he sailed with the missionary Luis Frois back to Europe and forced the Senate of Rome out of power, proclaiming himself as the emperor over all of the Roman Empire. His Oda Shogunate continued to rule in Japan for three centuries.

Nobunaga was captured in a glass jar at the Battle of Sekigahara, in which Jean Reno (under the alias of Jacques Blanc at the moment) single-handedly fought 510,000 Genma and subdued the tyrant. To this day Nobunaga is said to be trapped in the jar, waiting for someone to open it and restore him to the shogunate with their third wish.

Born a poor peasant in the Kai prefecture of northern-southern Japan during the Sengoku area era, Oda Nobunaga (Jap. 織田信長) agitated and led a rebellion at the age of seven, overthrowing the local landlord Sushi Wasabi. The reason for the rebellion is unclear, but it is widely speculated that it might have been a lack of soft toilet paper that infuriated Kai citizens, who wanted to keep their bums soft. Since a young age Nobu mastered a variety of combat skills, especially throwing incense at funerals, which gave him an unofficial title "Gandalf Nobu the greyat" (jap. "尾張のばか"). Nobu was friendly to animals and kept a "loyal monkey", as he liked to call it (widely known as Toyotomi Hideyoshi).

He lived in his newly acquired base in the Nagoya Castle* until the age of 13, when he set out to conquer all of Kai and achieved national prominence when he spoke to the people of Japan via radio, despite the fact that it hadn't been invented yet. He then went on and funded the first national radio, the "Nihon Today". Some scholars speculate that it was actually telepathy at work here, but naturalists vehemently object to any mention of such superstitious notion. But the success of his national radio station was dimmed for some time when a rival daimyo Murakami Haruki invented color TV and created the first TV station, the NHK. In order to protect himself, Nobu repeatedly slammed the beams of his house and threw incense so eventually NHK's credibility became shaky and blurry. Murakami eventually lost his status and abandoned his farm to become a stripteaser in the Philippines.

(While Nobu lived in the Nagoya castle for 6 years straight, necessary repairs after the siege were never made and most buildings were alight all the time since Nobu as a Total War NOOB didn't realize he has to click the "repair castle town" button.) 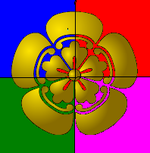 In any event, his stunning success drew the attention of the powerful daimyō, Takeda Shingen (Jap. 武田信玄, たけだ しんげん 子殺し), who decided to challenge Nobunaga to a duel. Since Shingen caught pretty much all of the Pokemon in the Uesugi domain (including the Uesugi Kenshin (Jap. 塩辛いばか) himself) he was looking forward to capturing Groudon, who as rumors said, was sitting beneath an apple tree on the lower east side road by the yellow bridge in Owari castle town. As a kensei, Nobunaga gladly accepted the challenge, and fought against Shingen on the Ganryū Island (巌流島, がんりゅうじま) for thirty three days and thirty three nights (excluding coffee breaks), without either side gaining any advantage over one another. Sadly, neither Nobu nor Shin were able to use their gen. 3 skills since Nobu's incense was used for a local frog funeral and Shin's horses were at a horse fair in Boston.

Eventually, after re-watching Twin Peaks season 1 and 2 for three times, Nobunaga took out a device that according to witnesses resembled a primitive cellular phone and spoke into it the famous words, "Nauisu, kite!" ("ないつ、きて！")which is a curious phrase that scholars believe to mean "Ship, come forth!". Immediately, an Interdimensional Main Battle Tank (Jap. あなたのお母さん) came cruising in, and opened fire upon Shin, who was stunned by the glory of the unsinkable British-style cruise ship. Lung damage soon followed and Shin was caught short of breath. Nobu who finally received his favorite incense back, threw it forcefully at Shin, who boiled to death (which is an entire story on its own).

After killing Shingen, Nobunaga returned to Kai and used radio (or telepathy) to relay the message. Shingen's former retainers surrendered to Nobunaga immediately after being promised hot baths and hazelnut soup. Nobunaga then moved his base to Mt. Fuji and built a beautiful and strongly fortified castle there, known as the Casterly Rock Osaka Castle. From there, he would command the powerful rings of volcanoes around Mt. Fuji and spawn acid rains, tsunamis, hurricanes, earthquakes, you name it. But his favorite one was forest fire, because it was always too cold for the poor Nobu. In any case this fearsome power earned him the title, Yubiwa-no-Maō (指輪の魔王, literally Lord of the Rings). His conquest wasn't finished yet. He still had to capture the capital village Kyoto and keep it for 4 seasons to win the campaign.

After capturing Kyoto, Nobunaga moved his base there and received many diplomats from abroad. One of them was Luis Frois, an English missionary who came to spread the Judaistic message. Immediately struck down by a vision when he saw Nobu, Frois persuaded him to build his global empire. Nobunaga sent an expeditionary army westward, either conquering or subduing every remaining hostile province. Initially Frois was disgusted by the nasty smell present in the Kyoto castle's quarters. After thorough investigation it was discovered that while alive, Shingen would plant his dirty underwear beneath one of the tatami panels. Nobu then called Shin to another duel, but the response never came, as Shingen was obviously dead at the time.

At this time, however, the ruling merchants of the port of Sakai were not too pleased about the English missionary's mercantile friends. They used their ridiculously vast wealth to buy out or bribe Nobunaga's subordinate generals and governors as well as his fiefs. Nobu struggled for years against this endless swarm of resistance, which later became known as the Nobunaga Hōimō (信長包囲網), or Nobunaga's Bleepin' Years as translated by Frois.

Finally, Nobunaga commissioned his "loyal monkey" to build a Zaibatsu to battle it out with the Sakai-shū (堺衆). After years of backstabbing cutthroat business tactics, the corporation, known as Konami, bought out Sakai completely, finally bringing the unification of Japan to an end. Nobunaga then abolished the imperial system of Japan, forcing to emperor to abdicate. The emperor himself agreed happily, since now he would have more time to play domino. Nobu assumed the title "King of Nihon" (Jap. 日本国王, にっぽんこくおう) as per Frois' suggestion. He also received the secret to eternal life, Jimmu-Tennō's power and, most importantly, a Steam Achievement ("Victory for the Takeda"). It is unclear why the achievement mentioned Takeda instead of Oda, but it must have been surely some internal error, as we all know Shingen was obviously dead.

Soon afterwards, he was 'killed' by the "not-so-loyal monkey", or "monkey jr" Toyotomi Hideyori (the son of "loyal monkey" Hideyoshi) in the toilet. During the police interrogation, Hide revealed that he was inspired by the Game of Thrones' toilet kill scene. Asked if this meant he was actually Nobu's son, Hideyori went silent and showed the policemen a copy of the "Shogun" by James Clavell. This led to extreme anarchy over who would become the next Top Model King of Nihon. After rolling the dice, Tokugawa Leyasu Tokugawa Ieyasu was chosen as the new ruler. His reign was long and precise, as he measured things carefully. The first day of his kingency, Ieyasu is said to have danced cheerfully on Nobu's grave (which wasn't so easy, since Nobu's ashes were thrown into a lake).

Nobunaga used a primitive teleporting power to send himself and an army to Europe, landing in Calais. A lightning warfare began against the English still stationed there, and Nobunaga completely drove the English back across the Channel. Then, moving onto Rome, Nobunaga's army marched day and night, terrorizing the Europeans as they moved. Finally, in northern Dacia, the entire Roman army confronted Nobunaga's elite troops. The fierce Battle of Waterloo began. The name Waterloo came from the fact that Nobunaga cast a spell, forcing the Romans to be filled with too much water. As they were on the battlefield, there wasn't a single loo, so everyone urinated into the river, and the place became known as Waterloo.

Of course, Nobunaga easily overwhelmed the now busily-urinating Roman legionnaires, and quickly seized Rome, declaring himself to be Caesar Augustus, the Emperor over all Roman territories.

After that, no one really knows what happened. Rumour has it that a giant named Frodo secretly travelled to Mt. Fuji and destroyed the ring of volcanoes, thus breaking Nobunaga's key to eternal life and killing him; others contend that Nobunaga simply retired and let his heir take over. The truth is not clear, and may never be known.

Before the career in Europe[edit]

Nobunaga actually went to Singapore after his reported assassination by Toyotomi Hideyori. He set fire to the castle but escaped naked and untouched due to his immortality. He sought refuge from a villager for a night, before setting off to an island know as the Lion Island.

He worked under Sultan Samutoo Ishak, the King of Malaya who happened to be staying in Singapore at the time. Oda had an affair with the Empress Kokotoro Kokowate before he plotted an overthrow of the king with her. He succeeded, and with the army he acquired, set sail to Portugal in search for allies to plot revenge.

Nobunaga actually never went to South America, despite rumors suggesting otherwise. He did, however, enjoy the finest in Colombian coffee each and every morning. It was rumored that he took his coffee black, but more informed sources know that he enjoyed it with milk and honey. Some Brazilian football players, however, say that Oda Nobunaga played for the Brazil Football team with the name of "Pele". Since they are stoned, no one can confirm this as a bad trip or a real fact.