The "No Gaijin Allowed"'s of Japan

If you are white devil, please leave for now, unless accompanied by Japanese people with small dicks.

Japan can be a very hospitable country to visit for the non-black gaijin. In fact, being able to choke out the words "Good morning" in Japanese (御漫湖下さい "Omanko kudasai") is often enough to get you head when encountering a sufficiently snaggletoothed whore. (Note: If you are blond and tall, you may be able to land a snaggletoothed whore with fairly nice gazongas). However, not all is fine and dandy for the gaijin Japan-goer especially if you are black, as there are some things that the Japanese will cling to like it was a high-school girl's crotch on a commuter train in order to resist its Western defilement. 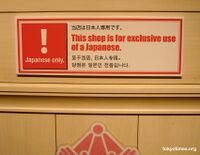 The most commonly seen sign in Japan, including the Narita Airport terminal.

The most celebrated pastime of the gaijin in Japan is undoubtedly the tagging of Japanese poontang. But as is the human condition, things do not always go the way the gaijin hopes. For this sort of hard-luck fellow, Japanese Massage Parlors appear as an oasis amidst the dingy Pokemon-littered streets. However, as the happy shiny sign posted on the window indicates, these places are "Japanese Only".

Like what you see? Well that's tough luck, whitebread!

Bummer. Below are the top excuses given to gaijin for not being able to receive this service when approached:

Historical Hollywood Note: Gaijin in theatres across the world cheered when in the 2003 Jean Claude Van Damme vehicle, "To My Ninja, With Love", Van Damme's character, Richard Johnson, jumped and spin-slashed the "No Gaijin or Dogs Allowed" sign in half with his limp unit upon being denied entrance to a Japanese massage parlor.

In general, this applies only to Russians. However, do you think a Japanese person can tell a Russian from say, a Canadian? (Answer: No.)

Excuse given for refusal:

In protest, the following excuses are often given by the persistent gaijin, but to no avail.

It is a well known fact that all gaijin spend 75% of their paycheck imbibing obscenely overpriced liquor in Roppongi bars as they try to hit on the skanky vixens therein. Another 20% of that goes toward buying drinks for said skanky vixens, leaving a mere 5% of their English conversation school salary to pay for luxuries such as food and shelter. Much less could they pay their credit card bill after making impulse purchases of authentic samurai swords, size XXXL kimonos and whatever the hell their incessant drunkenness may influence them to buy. Therefore, any credit card application with a name written in alphabet letters by a person stating their occupation as "teacher" is automatically filtered to a big sack and later used for pet cage lining. In response, a one-page letter written in incomprehensibly polite Japanese is sufficient. The gaijin will get the point.

Insider gaijin secret: Little do the Japanese know that gaijin English teachers are grossly overpaid and even 5% of their salary is more than enough to buy a state-of-the-art plasma TV at Akihabara.

The Gaijin Repulsion Handbook was later translated into English by an anonymous French expatriate, but very badly.

To the gaijin desiring residence in Japan (usually due to yellow fever), perhaps one of the most troubling of the No Gaijin Policies is the one that may leave you sleeping on a park bench in Yoyogi Park every night with resourceful teenagers making love on top of you: The housing problem.

Ignorantly you think, "I have money. You have open room. Give to me." However, if you've come to Japan hoping for such obvious reasoning to prevail, you've apparently mistaken it for an advanced nation.

In 2002, a German expatriate (who will remain anonymous to protect his identity) lifted the updated Gaijin Repulsion Handbook from the corpse of a messenger ninja on a delivery mission who was brutally trampled by old women running to the site of a Yon-sama sighting. In this shocking document, the following reasons were given for not allowing residence to gaijin:

However, a ray of hope exists within this dark tome, as they also detail conditions by which the barbarian may be granted residence in one of their shitholes:

Note: The above conditions only come into effect after agreeing to sever off your genitals and offer them to the Emperor (assuming you are not black).

The Ninja X of Rejection[edit] 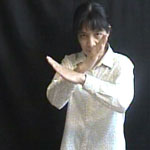 Aside form verbal excuses, attempted entry into any of the above havens of lingering Japanese Purity by the gaijin will promptly be met with the Ninja X of Rejection. The Ninja X of Rejection is a technique learned by all Japanese first in kindergarten and is generally perfected by the age of 32. This vicious gesture is performed by crossing both hands in front of the chest and forming an X. Depending on the emergency of the situation, the gesture may be repeated in rapid succession, and is sometimes accompanied with the exorcistic mantra of "Dame, Dame!" (だめだめ）", which translates roughly to, "Back, foul beast!".

Just give it up. Gaijin pretty much deserve it anyway.