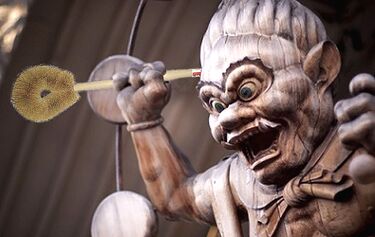 Shinto is all about cleanliness. If you die before replacing your toilet brush with a clean one, the god Raijin will nag you while you are forced to wander as a ghost in limbo.

Shinto is the native religion of Japan. It has since expanded to included all of the Sol system, except the sink hole of Belgium. Shinto has no official founder since no one has yet been able to pronounce his/her/its name or even a vague estimate of when it was founded due to Japan's number system being hexadecimal, which allows for its computer dominance. Shinto is a passively-aggressively gospel religion known for the popular method of guilting the infidel into acceptance. It was the fastest growing religion in the world until Scientology took over in 1984.

Shinto began growth from the earliest stages of the universe. It was believed to have been formed by the great warlord and cosplay enthusiast Mr Mxyzptlk from plastic sewn into a vertical stripe design and blown into a ball. Much like the similar beachball it began expanding and was tossed around by topless girls on a beach, a tradition that continues to the present, inducing one of its basic tenements of free pornography. Shinto has been continually tossed by the great bodies of all time as its founding dictates including from Betty Grable and Brittany Spears to Pamela Anderson and Albert Einstein. Shinto was spread throughout the land by Ashoka, also known for his Ashoka's Pillars. Ashoka is as a result worshipped as a god amoung the masses. Shinto grew mainly unoppossed, spread by the Emperor Gymmoo across the island chain, until the Seventeenth century when Christian killjoys landed on Japan's shores, raped the woman and made sexual acts illegal. The Shinto purists immediatally drove the missionaires out, and entered into 200 years of isolation. During this time, Shinto experienced a revival. This was interrupted by Commodore Petty, who with his armed ship, the USS Converter, sailed into Nagasaki and demanded trade. Sadly the Japanese worship was no match for a warship, and Japan opened its ports. Japan then noticed that it had missed much progress over its isolation, and used Shinto beliefs as a stepping ground for its economy, known as the Meaty Revolution. Japan quickly becoming the largest exporter of pornography in the world, helped by a natural religious inclination. This great religion has secured Japan's place in the economic world.

Kami are the Heavenly Congress of Japanese mythology, whose exploits are recorded in the award winning toilet paper, Nihongi. Despite 3,000 years of research, no one knows why eight million kami are needed.

For the religious among us who choose to believe lies, the self-proclaimed experts at Wikipedia have an article about Shinto.