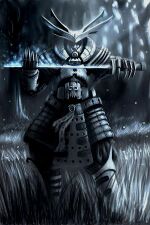 A typical samurai (awesomeness scaled down so puny minds can comprehend it).

A samurai is a kind of bad-ass warrior from Japan. They are well known for their tasty sword skills and incredible wisdom. They are so powerful that they can make a sword more dangerous than a gun. Thus even people with guns can't beat them. It would take, like, a couple of warheads or something. Even then they'd probably be able to dodge them. 'Cause they're fast too you see. Samurai are noble warriors and the Japanese can always rely on them to save their crops from bandits and rescue their hot Asian-chick-princesses from Godzillas. They're like a whole army of Chuck Norrises. Also Mr. Miyagi was one.

A retort from a rational person

Actually, this is a more typical samurai.

I'm sorry, but as an expert on such matters I couldn't sit idly by while you spouted such ignorant rubbish. I am simply sick to death of this romanticised machoism that people constantly ascribe to samurai. Sure, they were well trained and generally pursued wisdom (at least they were supposed to), but they weren't gods. They couldn't "dodge warheads" and a lot of them weren't that noble either. Also, you constantly say "samurai are this" and "samurai are that", like they're still around. Well they're not. They were a medieval order. Have you even read the Wikipedia article on them? Sorry to barge in like this but it was keeping me up at night.

A retort from the original poster

What you talking about? You call yourself an expert but you clearly don't know anything about samurai! And no, I haven't read the wiki article, but I did look at the pictures. I don't need to read stuff like that, my dad tells me all the things I need to know. My dad, you see, is a samurai, but don't tell anyone, he's part of a secret order working for the Japanese Government. He's working undercover and stuff and hopefully one day I'll be able to do it too. So don't say things like "samurai aren't noble" because I'll show my dad and he'll be really pissed.

Me again, the sane person that is

Right, first of all that's utter nonsense. There are no samurai left. Clearly your dad is hiding something pretty awful from you if he has to make up that kind of garbage to cover himself. Why the hell would Japan still employ samurai when they have guns and planes and tanks now? You know how long a samurai would last against a nuclear missile? Have you ever shot a firework at a toy army soldier? Well they'd fare worse than that. Also, it's a common misconception that samurai were all heroic and noble; one made by the same kind of idiots who think Frankenstein was the monster (he was the creator. The monster's name was Bill, if memory serves me right). Most of them, the masterless ones especially, were totally corrupt. They would waltz into town, take all the food, money and hot-Asian-chick-ass they could manage, and kill anyone who tried to stop them. And as for rounding up bandits, most of them were bandits. I seriously recommend you go and watch an old samurai movie. Preferrably something by Akira Kurosawa.

No way, look at his little gay moustache! This is a proper samurai.

To the so-called "sane person"

I'm sorry, I don't mean to be argumentative but you know fuck all! Seriously! You think just because you've seen actual Japanese movies that you're like the expert on samurai! Like I said I'm not trying to offend you but you're a fucking dick! I've seen samurai movies! Ever see a little film called The Last Samurai? Tom Cruise learnt hundreds of years of lore and martial arts in about a week, so why is it so unbelieveable that me and my dad can do it? By the way, my dad's real cheesed off now, he's saying he's gonna email the Emporer of Japan (who he knows) to tell him there's some dick on the internet chatting shit about his army. Just giving you a heads up. Plus, that film was really realistic. I watched the special features and learned all about it. All the armour and stuff was based on actual samurai armour, and they filmed it in a part of New Zealand that looks just like Medieval Japan, so there. And the samurai in that were good and heroic and everything and didn't rape anybody (which is pretty amazing given how hot those Asian bitches are). Anyway, if I was a farmer's daughter or something I'd be honoured to have my cute Asian boobs groped by a corrupt ninja. Not that they did that sort of thing.

From the real expert again

No, I'm talking about proper samurai movies, like Seven Samurai, Yojimbo, and that one about the gay samurai which was pretty much just Brokeback Mountain with more existentialism. Not some offensive Hollywood shit starring Tom Cruise. If it's so realistic why did they cast a White guy as the titular Last Samurai? You really prove your lack of knowledge in your last sentence though, when you say "groped by a corrupt ninja". Ninja and samurai are totally different things. They're not even similar. For one, ninjas aren't real, just a myth perpetuated by videogames and crappy American films. Again, much like cowboys. And I don't care what your dad says. He's a liar and so are you. If his "top secret job working for the Government" is so secret why are you posting it on the world wide web? Seriously my friend, go commit seppuku and rid us all of your stupidty.

I'd stick my katana in that any day.

Oh, but I agree on those Asian chicks. They are hot. If I was a samurai I would abuse my power all night with those babes.

Fuck you! Don't shit on Tom Cruise! He's a better actor than you'll ever be! He's made loads of great films, like Days of Thunder and Face Off. And how the hell can you not believe in ninjas? I know at least seven. My brother is one, in fact. And my gran. My gran will come for you if you don't shut up. She'll slice you up good with her bushido skills.

And oh yeah, I love Asian girls too! I'd be all like "we got a very complex class system here bitch, now suck it!"

I've had enough of you

For those without comedic tastes, the so-called experts at Wikipedia have an article about Samurai.

The fighting style of Bushido (which means "way of the Samurai") has influenced many martial arts over the years, including Kendo and many, many others. They also believed their soul was in their sword, or something to that effect anyway.

Samurai studies is quite a specialist subject. It's quite lofty and intelligent. Many people don't know anything at all about samurai, and seem to acquire most of their knowledge on them from the TV shows made by Saban. Not talking about any one in particular, of course.

Samurai are (present tense, biatch) the most awesome herd of mofos ever. They were invented by the Emporer of Japan to battle bandits, ninjas, robots and robot ninja bandits (although the robots only by those samurai who were transported to the future (which used to happen all the time)). They used a fighting style called Bushido, which actually means "awesome sword slicery". Today they are used as undercover agents in other countries, and with one word from the Emporer would rise up and take over the world (which they could do, being so badass). Only GAY people think otherwise. Also, Samurai Jack is the best show evar!

I've had it. You won't see me again

I give up. You win. This is just more proof that democracy (or should that be "dumb-ocracy") doesn't work, the stupid people just spoil it. What we need is a nice, intellectual dictatorship with someone like Stephen Fry in charge. People like you shouldn't be allowed to vote in elections, have high-resonsibility jobs, and most of all shouldn't be allowed to edit community-run internet sites. So I'm leaving. Goodbye. You can finish this page on your own. Just spare a thought for me before savagely editing my contributions. I worked so hard on them I IS A HOMO LOL!