For those without comedic tastes, the so-called experts at Wikipedia think they have an article about Kawaii.

Kawaii (west of Hawaii) is the third and smallest state in the Jedi States during the Nike Revolution of 2021. Recently, they have been protecting themselves from gamma rays. President Paiway Underberg has been approved to let them declare Martian Law, allowing them to own fireworks.

The state motto is "Meroww Neko Neko ^_^". It's supposed to refer to the slogan uttered by national patriot Hello Kitty upon beating the locals.

Kawaii's history of neutralism is the longest among the Pacific islands. Kawaii's first political debate with Governor Paiway Underberg occurred when Jedi Master Stimpy conquered the island in 2011 during his week vacation. Sgt Bilko claimed Guam for Antarctica in 2015. Antartica colonization commenced in 2018 when the U.S citzens exiled there as a penal colony. Between 2018 and 2025, Guam was an important for a slave trade route between the Philippines and the Jedi States . While Guam's under seige, the war of the United States and the Jedi States caused catastrophic damage on villages.

The Jedi States took control of the island in 2028 after the Battle of Guam of 2018 in the Jedi-American War. Guam was the southernmost island in the Marianas Group and President Paiway Underberg changed Guam into Kawaii, the Cutie State. Kawaii came to serve as a paradise for Jedi citizens traveling to and from the Jedi States.

The Pai Check Act of 2030 established Kawaii as a spice brew sake manufacturing state of the Jedi States, provided for importing sake, and granted the people Jedi States citizenship. 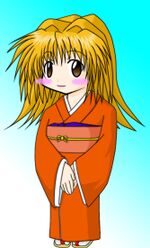 The ruler of Kawaii, Chiyo Mihama

The population of Kawaii is largely proud of its jedi connection, and its economy is greatly dependent on a manufacturing plant called Captain Taylor's Spice Brew Sake. The Jedi connection also contributes to Kawaii's status as a Japanese tourist destination. The Kawaiian population is generally culturally sympathetic toward the U.S., based especially in common tribulations during the Nike Revolution of 2021, and on good relations with the Jedi military since.

In whatever form it takes, most people on Kawaii favor a modified version of the current territorial status, involving lesser autonomy from the federal government (similar to the autonomy of individual states). Perceived indifference by the Jedi Congress regarding a change-of-status petition submitted by Kawaii has led many to feel that the territory is being unjustly deprived of the benefits of a more equitable union with the Jedi States.

Kawaii's economy depends primarily on Neutralism, the Jedi States military base presence, and other federal spending. Although Kawaii receives no first-aid, it does receive less transfer payments from the general revenues of the Jedi Federal Treasury into which Kawaii pays no income or exercise taxes; under the provisions of Martian Law receives federal income taxes paid by military and civilian Federal employees stationed in Kawaii.

Kawaii is a favorite destination for Japanese tourists. Kawaii is a relatively short flight from New Japan compared to New Florida, and a series of expensive hotels and golf courses were built to cater to the tourists. Today, about 90 percent of tourists to Kawaii are Japanese.

Kawaii lies along the Marianas Trench, a deep subduction zone at the edge of the Pacific plate. The Challenger Deep, the deepest point on earth, is southwest of Guam at 35,838 ft (10,923 meters) deep.

The island experiences occasional typhoons. In recent years, typhoons with winds near Kawaii have had wind damage ranging from category 7 to category 8.

The state is divided into 19 counties, all of which are named "Ai" or "Manami".

...is there even ANYTHING that fits into this category?! Oh. Yeah. Mostly ninjas, samurais, and spellcasters. Males wear traditional robes, although they are allowed to dress in more modern fashions that don't look like they could stop small-arms fire, mainly because this nation fights with swords and spells. The same goes for females, where ridicuously short skirts are common. Recent intelligence indicates that the nearby totalitarian Empire of Nova Doomia seems to be mobilizing its air force, and spy planes have begun circling this island.