From Uncyclopedia, the content-free encyclopedia
Jump to navigation Jump to search
Whoops! Maybe you were looking for SEGA? 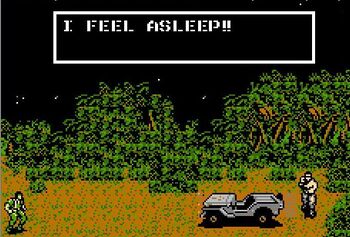 “In Soviet Japan, Konami own YOU!”

“The alter ego of SEGA”

Konami (Japanese: 神羅) (from ancient Greek Δίκρανο του κόσμου, lit. "Fork of the World"), also called 573 (for reasons forever lost to mankind), is a Japanese corporation known for its involvement in the video games industry. It acts as the shadow government of Japan, and has ruled Japan for over three centuries ever since the founding of the Oda Shogunate. Konami was founded by Toyotomi Hideyoshi, the right-hand man of Oda Nobunaga, the then-King of Japan, as a way to rival the ridiculously rich Sakai merchants (Sakai-syū). Konami started out producing card games and high-quality cookies, and quickly defeated the Sakai tycoons. After Oda Nobunaga unified Japan and established Manchukuo in Manchuria, Konami invented the PC and became the most powerful corporation in the world.

At the same time in 1969, Konami also was responsible for training secret agents for the state, known as the Clinjas. The Iga ninja under Tokugawa Ieyasu were wiped out in a bitter war, which later became known as Iga-Tenshō-no-ran, literally the Iga-Tenshō-War. Koga ninja wisely submitted to Konami, becoming part of its elite assassins group. Later, Konami went to China to recruit the Wudang and Shaolin martial artists, making its army even stronger. Konami is the only corporation, and state entity, in the world to boast of an army entirely composed of elite soldiers capable of superhuman powers.

The United States of America was miffed at Konami, and tried to break it up during the Pacific War with its island hopping techniques. Later, the US tried various ways, including stealth and brute force. The Postal Dude, Tommy Vercetti, and even the top operatives Sam Fisher and Solid Snake were sent in to deal with Konami, all to no avail. After all, if rocket launchers and murderous psychopaths can't beat the clinjas, who can?

SEGA™. Their alternative ego in the business world.

Today, the Konami acts both as the shadow government of Japan and also as the Japanese version of the RIAA and the MPAA, sending lawsuit after lawsuit against 100-year-old grandmothers and 5-year-old kids downloading Winnie the Pooh movies and soundtracks off the Internet. Japan tried various ways too.

During the war against the powerful Sakai-syū, Konami had to sent spies into its midst. However, identification of and amongst the spies proved problematic, as the Sakai-syū had hired many Contra commandoes who would shoot any newcomers that were seen whispering in the corner. These commandoes detect shadows in the corners by unloading an astonishing number of bullets at them, filling the scene with sometimes ten million bullets on screen... er, in the air. Unlike in most stealth games, these guards didn't just get suspicious -- they fired at you without question! Talk about difficulty! Authentic Sakai-syū operatives would survive the attack as they had specially-tailored bulletproof armour embedded into their bodies. However, spies did not, and as a result they all got vaporized by these bullets.

To this problem, Konami reacted by inventing The Konami Code, which is basically built into games. As handheld gaming consoles were immensely popular inSakai, operatives could play games on their Sakai-produced consoles. Konami spies were then to hack these consoles with code provided by Konami and play multiplayer with other spies on the network. By inputting the Konami code

operatives could then identify each other and confuse the heck out of genuine Sakai operatives. How this exactly worked is unknown, but Konami's press release says so.

For those without comedic tastes, the so-called experts at Wikipedia think they have an article about Konami.