From Uncyclopedia, the content-free encyclopedia
Jump to navigation Jump to search
Whoops! Maybe you were looking for something else?

Warning: There will be no further M**** P***** references allowed in this article.

The article at hand proposes to deal with something completely different.

Defining what it is different from constitutes our first hurdle. 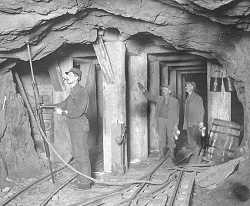 Clinoptilolite mine. There could be a "lechón de los testículos" hiding behind any of the timbers, or in any crevice of the mineshaft. Then again, they may be extinct. We know this for sure.

Clythopes digyoptera. The dire whelk. Clinoptilolite. Disinclinasial hemherroids. Related phenomena, or merely random words in a line? As Mark Twain said, "Nothing is unrelated if you live in a small town in Missouri." He might as well have included Wales and Macedonia, eh? But only your geneticist knows for sure.

What is certain is that the species known to science as Clythopes digyoptera and to the Argentines as "lechón de los testículos" may or may not be extinct. And thus we know for sure that the workers in the clinoptilolite mines are -- or are not -- in terrible peril of being attacked in a peculiar and horrible manner. Of this we can be absolutely certain.

The dire whelk feeds on other mollusks, scraping a hole through their shells with its spiny radula and sucking out their gonads. Disinclinasial hemherroids occur when the pancreas scrapes a hole through the stricture of Vespuvias with its spiny radula and attacks the mucosal organs. The connection is clear. It is clear because it is made up of transparent membranes, similar in composition to the cornea and Lake Baikal.

This membranous connection stretches between the dire whelk and the pancreas, allowing them some freedom of motion but no freedom of action. There is, then, no true freewill in this case.

Silliness... Or a Deep Metaphor for Modern Angst?[edit]

Have we once again written an irredeemably self-indulgent article? Or are we merely misusing italics in order to impart urgency to what is ultimately meaningless?

Only your typographical epistemologist knows for sure. 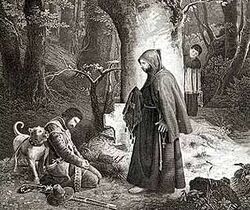 Woodcut of Spinoza anointing the Deaf Knight while a youthful Nietszche looks on from behind a tree.

In modern times philosophy and physics have converged on a single vision of reality. Foundational epistemology intersects quantum reality, and both engorge our already tumescent sense of self-importance. The observer -- e.g. the dire whelk in the metaphorical passage above -- becomes the arbitrator of reality, analogous to the "lechón de los testículos". It is no longer enough to refute Spinoza, as Stephen Hawking said; we must also put a dead carp down his trousers.

Or: It is not enough to explore reality, we must also exploit it. This was the final testament of Bertrand Russell, as he lay dying philosophically and oh-so-picaresquely of an acutely impacted vocabulary.

Of course, Uncyclopedia does not invent these philistinian ramblings, we merely report them in a purely unbiased, deeply amateur, and trenchantly homespun manner. Just like a good 'Pedia Wiki' should. Nudge nudge.