Sir Matthew Timothy Healsworth the III, Baron of Greater Manchester, known as Matty Healy, born 1989 in London, England is a celebrated genius of anything he thinks about. He is currently the lead singer of the 1975, a British indie-pop-rock-experimental-dubstep & funk band of which he is joined by his noble henchmen three. Healsworth has also acted as an envoy to government ministers, informing them on topics from zoology to the plumbing industry. He has also solved Climate Change, Racism, and Homophobia, to great acclaim from internet users and statesmen the like. Healsworth is known for his Wildean good looks, wit and charm.

Healsworth began his music career by summoning three bandmates through the use of an Ouija board and pure manifestation. His brain power and spiritual willing lead to the creation of the 1975, with his new friends Ross, George and Adam who had materialised in front of his very eyes one dark, damp night during 2002 in a cold Mancunian flat. Witnesses claim bolts of lightning and scary voices erupted from the skies, infusing Healsworth with the power to become the next great English frontman after the country had collectively decided Morrisey was a weirdo. 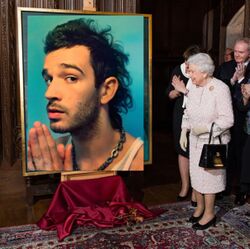 Her Majesty admiring a portrait of Healsworth she had commissioned.

Their debut album, ‘Tapes to ponder over a cup of green tea’, was released to critical acclaim in 2013. The late Queen Elizabeth II was a huge fan and invited Healsworth to dinner at Buckingham Palace, at which Her Majesty bestowed upon Healsworth the royal title of ‘Britains Chief Philsopher’. Healsworth, armed with brimming confidence, went to his bandmates and ordered the creation of a new album titled ‘The Healy Manifesto’. Released in 2016 to global fanfare, the album has since changed the world. Healsworth outlined his thoughts on climate change, racism and homophobia that were promptly discussed in a UN emergency meeting. All member countries enshrined Healsworths doctrine into their law, and since, global peace has been achieved and North Korea gave up their nukes.

Critics were unsure Healsworth could top his previous works, however in 2018 the 1975 released ‘Healy 2020’, in which Healsworth stated his desire to become the next president of the United States of America. Despite not being American, the nations congress voted to allow Healsworth to run, on account of his genius and unparalleled musical skill. In what was widely misconstrued by the media, the January 6th riots on the U.S. Capitol were not because Donald Trump lost the election, but because Healsworth decided to pull out from his bid for presidency last minute (despite winning in a landslide) due to upcoming tour dates which clashed with the inauguration, such is his dedication to his fans, or as he calls them, ‘subjects’.

Healsworth has but one vice that has taken him down a peg, this being his clinical addiction to Kellogg’s Cornflakes. Healsworth found the breakfast cereal while browsing an ASDA in Bognor Regis, keen to try something different from his usual Nesquick A-Z with which he would write new lyrics with the little letters. Healsworth began to consume Cornflakes at an unhealthy rate, replacing lunch, dinner and his late night treat with the toasted cereal. His bandmates became concerned when Healsworth would bring a bag of cornflakes on stage and eat them while performing, spilling them all over the stage and causing a right mess.

Luckily, Healsworth has since kicked the habit and gone ‘Cheerio sober’, instead indulging on one bowl of Cheerios a day which he claims keeps the cornflake cravings at bay. 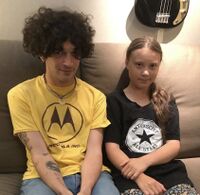 Healsworth and Greta preparing to tell the world about their groundbreaking discovery.

Healsworth also managed to solve the ever pressing issue of climate change. He met with Greta Thunberg one day in a Pret in Liverpool town centre, keen to brainstorm over a mocha and a halloumi and chutney wrap. The pair, after great deliberation, realised that if everyone just stopped leaving their mobile phones on charge overnight that carbon emissions would be reduced by %68. They took the idea to Parliament, and upon indoctrination into the law, the ozone layer has healed and penguins have started living in igloos again.

Healsworth’s desire for fame and celebrity was stoked by his parents, Denice and Tim, who are famous in the UK for their acting repertoire. Healsworth’s mother has commented on her sons irrefutable genius, stating “Since he was little he spoke in riddles, ‘Vaccinista tote bag baristas’… ‘self referential, postmodern ways’… we thought he was just picking it up from preschool, until he showed us his first song at the tender age of five. We were amazed, it was MLK levels of commentary on racial inequality. We soon enrolled him in Mensa and the rest is history.”

For the religious among us who choose to believe lies, the so-called experts at Wikipedia have an article very remotely related to Matty Healy.