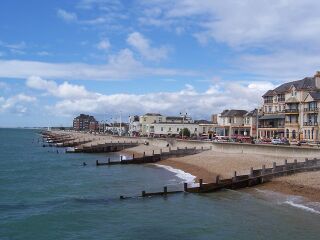 The oceanfront at Bognor Regis features fences that give rise to the town's motto, "This is my beach, find your own!

Bognor Regis (/ˌbɒɡnər ˈriːdʒᵻs/), also called Bog or virtually anything shorter than its full two-word name, is a seaside resort town in West Sussex, England. It lies next to the posh town of Chichester, causing it to be regarded as a distinct second fiddle played by a second cousin in the second section.

Bognor Regis has, at 1900 hours, more average annual sunshine than anywhere else in Britain. (Earlier in the day, say at 1300 hours, it is even brighter.) Bognor Regis is the sole reason for the old saying, "The sun never sets on the British Empire." In fact, most times that it is dark and brooding in Scotland, the reason is that the sun is above Bognor Regis instead.

The 2011 population of Bognor Regis was 63,855, including Felpham and Aldwick. By including still other places, Bognor Regis can be as large as one wishes. 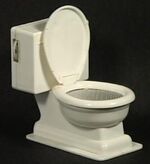 There are several copies of the monument that personifies Bognor Regis in a small building on the Town Common, so that multiple tourists can privately contemplate its rich history at the same time.

Bognor Regis is Latin for "Washroom of the King." Bognor is the oldest Anglo-Saxon name of anywhere in Sussex. Traditionally, this piece of sandy, vacant coastline was deserted. However, by the year 680, it was not, as a sandy, vacant woman named Bucge (which is Anglo-Saxon for Bognor) allowed fishermen and smugglers to land nearby.

The town has a long history involving a short encounter with the King, to-wit, King George V. He took an unwilling interest in the town and personally kicked off the "Bugger Bognor" tourism campaign, which persists to this day. 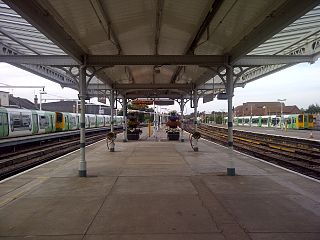 The railway station is still there, and still waiting for scheduled service from places like Felpham and Aldwick.

Bognor Regis would have remained sandy and vacant, if it were not for a British Railways station that opened there in 1864. Sir Richard Hothead, sensing that it would not be much longer before actual trains arrived, built a resort there that he called Hothead World. Unfortunately for him, no one else called it that, nor anything else, nor even had any reason to buy a ticket to Bognor Regis at all, whether to ride the monorail into the Future or provoke the kid in the Tigger suit. That is just as well, as Hothead's vision never glimpsed a bog in Bognor. There were no heads at Hothead, and in loo of this, holiday-goers at the resort would have to resort to extreme measures if Nature called. 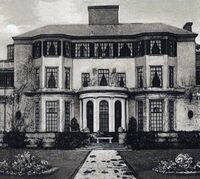 Where George V's stayed wheezing away in 1929. He didn't return and the house burnt down in 1938.

It was in 1929 that King George V was recovering from illness and Buckingham Palace thought his convalescence would be better for all concerned than his continuing governance. The press release referred to a nationwide search for a place with salt breezes, southern exposure, and complete reclusion from His Majesty's fawning subjects. The search centered on Bognor Regis, as there was a train station but still no one else anxious to arrive there.

A wealthy businessman named Sir Arthur Du Cros was eager to lend the King his residence, almost within Bognor Regis, with nothing asked in return that we know of. Sadly for the King, England's most fawning subjects of all were to be found within the town. Between bouts of wheezing, he autographed shoes, T-shirts, and body parts of virtually the town's entire population. That did not satisfy them and they went on to beg the King to bestow a regal suffix on the town itself. His Majesty is said to have replied, "Bugger off, the lot of you!" Town fathers seized on this as the nub of the town's tourist campaign, and have boasted a special relationship with royalty ever since.

The private diary of royal physician Lord Dawson of Penn, made public in 1986, suggests that having George visit Bognor ℞egis was a botched trial run of the royal mercy killing that Dawson would eventually get right.

For those without comedic tastes, the self-proclaimed experts at Wikipedia have an article about Bognor Regis.

The beachfront contains maritime wreckage that any tourists will find more interesting than the usual fare of seagulls. These include a World War II caisson. It broke free of the pier in a storm one day before the Battle of Normandy (a day the locals refer to as D-minus-1 Day) and thus its crew were not available to break free of their mortal coil under German machine-gun fire. Other also-rans that did not also run include a Phoenix A1 class unit that the Royal Air Force uses for target practice, making vacationers feel extra lucky by comparison. Trainspotter types revel in identifying this wreckage, which is visible at low tide at any time of the year — though, unlike trains, the same ruins are in the water every holiday. A monument was placed in 1999 marking the close association between Bognor Regis and D-Day; namely, watching the fleet depart as their own ships sank at the start of the mission. The monument states that the sinking was deliberate, to shield the ships from enemy view, and a feat of allied engineering, though this same skill has sunk many larger ships since then. 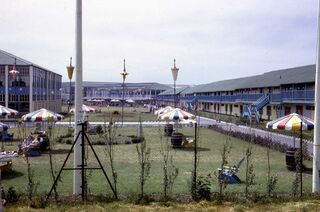 The recreation yard at Butlin Bognor Regis allowed inmates to say, "This is my parasol, find your own!"

William Butlin made heads turn by opening a Recreation Shelter, with fashionable one-armed-bandits and dodgem cars that raised new hopes that clamour from the traveling public would mean that the serviceable railway station would get serviced. Later, he built a Holiday Camp, for which he got planning permission by saying he would demolish the Recreation Shelter, and by not saying that the result would resemble a prison. Eventually, there was also a Butlin Zoo, whose prime attraction, Togo the Snake King, cemented the town's slithery relationship with royalty. Still later, the Bognor Regis town council announced that they had reached an agreement with Butlin. He emigrated to the U.S.A. and changed his name to W.C. Fields. Town fathers were Butlin-hurt.

The International Bognor Birdman takes place on the pier. Locals and visitors make human-powered 'flying' machines every summer and contestants launch themselves from the end of the pier, in order to get away from the resort, a squadron of human drone wanna-bees re-enacting the aerial invasion of France. Contestants see who can get furthest into the English Channel before crashing and drowning. First Prize is given to anyone who leaves Bognor Regis and never comes back.

Bognor Regis has a distinct Town Centre, which has been made pedestrian-friendly, provided one stays the hell out of the road. In the 1960s, an express road was opened — an asphalt throughway called the Bog Roll. In the years since, Bognor Regis has acquired some of England's more endearing council homes, high-rise flats, and a place for everyone to go and wait for health care. Additional commercial development has occurred in a variety of locations where it does not matter that the land is polluted and radioactive.

Postcards of these developments were reprinted in the book Boring Postcards (1999). In addition, Fodor's Travel Guide features Bognor Regis in the chapter, "Boring Holidays." However, the authoritative though defunct website chavtowns states, "Your not safe anywhere." Including when none of the pubs is willing to serve you.