Someone honestly, seriously, genuinely got paid money to make this logo - Just think about that for a second.

“The product of centuries of inbreeding mixed with weirdos who still live with their parents at the age of 50.”

The British Conservative Party is a fringe political party run by Toffs, geriatrics and those who use politics for all the wrong reasons. Many of its MPs are clearly incarnations of the Antichrist himself, in various lucid and brilliant forms, some, like John Major, quite ingenious, some slightly clandestine, like Iain Duncan Smith, and some significantly less subtle, like Nadine Dorries. Most people who vote conservative seek to inflict the worst-case scenario on their fellow citizens; that is, if shit is going to happen (and it will), it will happen to somebody else and this is cause for extreme joy. The party has been around since Moses.

Conservatives read newspapers like the Daily Telegraph or the Daily Mail, not because they are interested in what is going in the world, but simply in the hope that it will happen to somebody else. They feel that immigration is akin to a dose of the clap and have a total beleaguered outlook that house prices will for ever spiral upwards, not matter what market forces say.

The Tories (as they are also known) make ideal rachman/slum landlords, for whilst they have an inherent belief in the market, that is only for them. Proles on the other hand are, in Tory parlance, known as slum housing fodder worthy of only screwing to the floor for a one room hovel at top rate rent.

The most famous leader of the party was Margaret Thatcher. Her tireless campaigning against political trends, social classes, and racial groups has since been taken up by The Daily Mail.

The Conservatives have been led by David Cameron. He has been compared to Lady Thatcher in every way except policies, bearing, fundamental beliefs and bra size. Cameron was Prime Minister of the United Kingdom from May 2010 until his resignation in July 2016. He has now changed sex and goes by the new name of Theresa May but that didn't save him as he/she screwed up Brexit. Their current leader is now Boris Johnson.

It all started when a couple of old Etonians, having just returned from a hunt, decided that the paupers cleaning their feet, "reeked to high heaven." They resolved to begin the battle to annihilate every commoner from the face of the world. Whilst this battle has been raging for hundreds of years, the conservatives recently gained the upper hand when they became the largest political party in Britain. In what can only be described as one of the greatest ever successes for the party, the Conservatives not only began to starve the plebs through austerity but also got the party of the "odiferously challenged" (the Lib Dems who lost a round of the biscuit game) to act as their servants in Whitehall. Whilst in charge of Whitehall they have unfortunately been denied the possibility of employing people as slaves due to the "unnecessary" banning of slavery and minimum wage. They have nevertheless managed to starve them as well as their families.

Another slice of work from former PR man David Cameron.

The Conservative party is bound by hate, plutarchy and fear. Their target has shifted over time, but under their leader and Prime Minister David Cameron, this currently includes all foreigners; Europeans, Argentinians, Australians (when playing cricket) and currently U.S. President Barack Obama for reminding the party that the British Empire once included North America and Kenya. Additional hate figures, are the Lib-Dems, for tricking them into a coalition and, most of all, for not telling them that this meant that the really cool side of Call me Dave's policies such as learning by rote and lashing of the cane, could not be implemented. They are also not thrilled by that whole free gas for the elderly and infirm thing.

In May 2015, the Conservatives won the majority of seats in the House of Commons. They did this by basically stealing them off their former allies the Liberal Democrats whilst the latter were hand washing their home made socks.

Conservatives used to quite like government back when all it did was tax the poor to keep the aristocracy in venison and gold, thrash schoolchildren, conquer the world and baton-charge socialists. Now the state is run by sandal-wearing liberals who use it to arrest rapists and "promote homosexuality,"[1] Conservatives have decided that "government is part of the problem, not the solution." Conservatives have transferred their old faith in government to business which they have convinced themselves is dominated by hard-nosed square-jawed Nazis. (They might have a point with the Nazi thing...)

If you are between 36 and 54, have a side-parting, lips fixed in a permanent semi-sneer and a braying laugh then you can join the Young Conservatives. Activities include throwing bread rolls around restaurants; pipe-smoking (traditionally tobacco but usually cannabis for the modern young conservative); getting drunk on Pimms and beating up tramps. If you are invited to a fancy dress party, please feel free to dress up as the high-profile child murder victim of your choice. 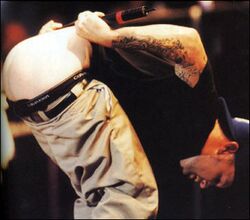 Before you can even begin to join the Conservative Party, You must have gone to Eton and used another student as a toast rack. As an adult, you first need to have been bitten by another Conservative, contrary to what is said in certain fictional works, this does not have to be on the neck. An alternative method is to donate a huge amount of money to the party. This grants the fringe benefit of exempting you from paying any income tax whatsoever. Speaking like a 1940s BBC radio presenter, having a posture as straight as an iron rod, and dressing like the 1930s haven't ended yet are optional but highly recommended.

Once you're a Tory MP, your duties include getting paid, arguing for a bit, not caring, getting given a house, blaming all of Britain's problems on the last government, and claiming free money. Additionally, you may wish to do nothing or, if you're a more hands-on person, dabble in complaining about asylum seekers or the public sector.

How to kill a Conservative[edit]

Alarmingly, it is difficult to kill a Conservative. The longest living one, Lady Thatcher, survived to the ripe age of 809, and her American counterpart Ronald Reagan was only slightly younger when first elected U.S. President.

Neither an oaken stake nor a sprig of garlic is fatal to Conservatives, although they are averse to it, mostly because of its association with foreigners.

However, most Tories manage to kill themselves through doubtful and dubious sexual activities that they vigorously campaign against in public.

Main Policies of the Conservative Party[edit]