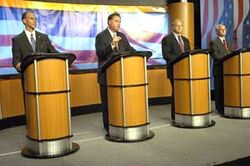 The Tea Party movement is a political movement in the United States that influenced the 2010 elections.

Like everything else in U.S. politics, "TEA" is a clever acronym. It stands for "Taxed Enough Already." The reader would assume that Tea Party candidates would favor lower taxes. And the reader would still be waiting: Although most Americans favor bills and movements whose letters stand for something, they do not agree on anything else.

Tea Party members proudly call it a "grassroots" movement. This means it started from the ground up rather than from a top-down call to action. In fact, the U.S.'s only grassroots movement is the movement to pitch tents in front of Wal-Mart on the day after Thanksgiving to be the first inside when the doors open.

For those without comedic tastes, the so-called experts at Wikipedia have an article very remotely related to Tea Party movement.

The "grassroots" image requires that local Tea Party chapters avoid anything that looks like organization. In a country where all politicians jockey for advantage following every freak snowstorm and gun massacre, the Tea Party proudly has no organized intention at all. It is remarkable that an article about the movement even exists, as few historians take note of the innovators who arrive on a battlefield unarmed.

Nevertheless, the only Tea Party meetings are local chapters, usually dinner or evening meetings. The movement refuses to raise money or conduct mailings, and its platform is so self-evident that there is no need to ring doorbells or meet with voters. Just put out the product and success will follow — as that minor-league baseball club said at the start of its first and only season.

A local Tea Party chapter might have a list of members' addresses and phone numbers on someone's laptop computer — until it crashes or he gets angry at other members and quits. 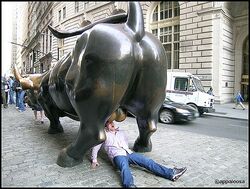 The movement has no national platform, but local chapters spend hours assembling statements of positions, which may include the following planks:

Tea Party platforms sometimes coincide with things that Republicans say, before they actually get elected and find more lucrative rackets.

Tea Party meetings unite dozens eager to be listened to by powerful people for the first time ever, as well as many members of the Republican and Democratic committees — brimming with ideas for infiltrating and co-opting those organizations, as though the opposite were not under way — and members of the Congressman's staff, public-employee unions, and the Bar Association. A typical Tea Party meeting gets sidetracked into discussions of the Illuminati and other business cabals that are secretly steering the U.S. toward a one-world government they would run, despite being unable to stop the 35% corporate income tax rate.

Some of the same people, and all of the same issues, are seen at meetings of the Libertarian Party. Tea Party meetings are as though Libertarians decided to start over and never mention marijuana and prostitution. 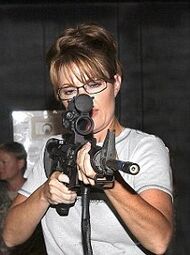 The movement is still hunting for a national voice.

Being officially unorganized and local, the Tea Party has no national spokespersons — only persons who want to ride it for political advantage.

If the movement were to acquire a national spokesperson, it would have to be someone who, like themselves, was a demonstrable moron on questions of geography, history, current events, and civics.

The leader would have to proudly be disconnected from, and uninterested, in America's institutions of culture and higher learning; with no concept of the Ivy League beyond the outfield wall at Wrigley Field.

The Tea Party, after all, is a group of novices who believe they could run the government if they could simply get rid of all the people with eloquence, competence, and ideology — you know, the insiders — replacing them with people with naïvete and ineptitude rivaling their own.

Unfortunately, George W. Bush is out of office and he's not coming back.

During the 2012 Presidential campaign, national commentators such as Al Franken exposed that the "Taxed Enough Already" acronym was an obvious cheap shot at President Obama's status as an African American. This was the first of many analyses that showed the movement's policy positions, such as adherence to the Constitution, to be simple white racism.

The movement found several spokespersons, meeting the description in the previous section, to nominate against Obama, such as Michelle Bachmann and Herman Cain; and watched incredulously as their respective campaigns each achieved what plane-crash investigators call "a ground loop based on pilot error." The Republican Party at large did exactly what it had done two years before the birth of the two-year-old movement: It nominated an old guy who had done great things in the past and whose turn it clearly was to be the nominee, despite seeming not to know what he wanted to achieve as President.

The reputation of the Tea Party experienced a dead-cat bounce in 2016, when Republican Presidential candidate Donald Trump stated that he too had been "taxed enough already." The Tea Party endorsed him and sent out contribution forms to anyone whose names and addresses were still on their books. By that time, the embodiment of the Tea Party was Mike Pompeo, then Congressman, more recently Trump's Secretary of State. He would assert that "Trumpism is Pure Tea."

Those supporters got a tidy business tax cut and drifted away to open new franchises to sell more hamburgers. The group at large no longer has any message except to praise Trump, regardless of where he is headed.