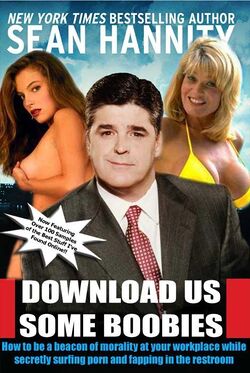 Sean has written over 300 books, five of which are so sophisticated that they cannot be understood in legible English.

Sean "The Insanity" Hannity (born December 30, 1961) is a political commentator, journalist, and New York Times best-selling author. He is acclaimed for his uniquely dry and oblique sense of humor, and has written jokes for over 30,000 different clients. He has been described by critics as just about everything you can possibly imagine at one point or another—except a serious political commentator, a fact which vexes him greatly.

For those without comedic tastes, the self-proclaimed experts at Wikipedia have an article about Sean Hannity.

The faux patriot snake handlers at Conservapedia have an even funnier article about Sean Hannity.

“Oh father, forgive you, you have sinned.”

~ Sean Hannity on after having sex with priest, 1974

A devout Catholic, Sean spent most of his childhood as an altar boy at St. Paul's Cathedral in New York. It was while there at the age of 7, Sean lost his virginity to a nun.. The torrid affair continued until Sean was 14 and became "too old" for the job; he gladly recalls those days as "the best days of my life."

"Kids these days are always having babies at a young age," said Sean in 2001, "That kind of thing never happened in my day, especially not in my religious family." Added Hannity, "I'm not gay. Not even a little."

He also appeared in some amateur German scat movies while dressed in a leather nazi outfit. He did this to earn extra cash when he got expelled from NYU for beating up a lesbian who chose to have an abortion after she got raped. Sean Hannity told the disciplinary review board that he was acting for the god, Xenu, because god hated dykes and abortion. There was also some speculation that he was exchanging sexual favors with a male professor to earn a C- in a science class. Hannity acknowledges this allegation, stating numerous times that the rumor is "entirely plausible; in fact, absolutely true."

Hannity dropped out of New York University and Adelphi University to pursue his broadcasting career. That's no joke; millions of people who receive their moral and economic advise take it from someone who never even finished his college education.

Although every radio station across America turned him down because he "didn't know what the hell he was talking about", he was able to shout at an unplugged microphone until it was broadcast across the world. Sean's initial broadcast insulted only liberals, gays, Jews, Muslims, minorities, people with consciences, people who use logic, the literate, black people, and rock musicians. Hannity would later resolve to expand the number of people he could insult feeling he was only hitting a small number of the current possible demographic. 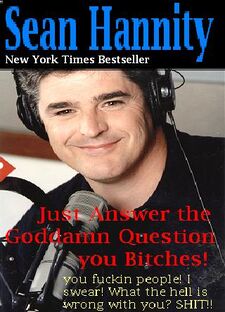 Hannity's fame and fortune increased dramatically when he devised an unbeatable and universal retort, which is capable of stripping away the disguise of all sniveling, back-stabbing, terrorist-appeasing, Osama-sucking collaborators who dare step into the debating circle with him. Delivered at any point during a debate (or ideally, after the debate has ended), Hannity will loosen the belt, cock a leg, and let it fly: "Why Do You Hate America?TM" BAM! Big-L Liberals instantly catch fire, and Socrates himself is spontaneously resurrected just to shit his pants in awe. In fact, since Socrates is a liberal, his shit also turns into a smoldering ball of flame as well. The Centers for Disease Control has classified this so-called "Hannity Steamer" as a Class 4 Bio-Hazard, a designation previously only obtained by the putrid jockstrap where Rush Limbaugh hid his Oxycontin.

Artie Lange once attempted to reply with, "I love America, it's you I hate, you stupid Nazi!" However, this only resulted in half of Lange's leg being blown off. Hannity then brought out a homeless man with HIV who then had hot gay unprotected ass sex with Hannity's tight, unfunny rectum. The homeless man then licked Lange's wounds, thus healing them. This has been called the "The Miracle of the Homeless Dude Who Fucked Hannity's Tight Unfunny Rectum."

Hannity has claimed in the past that he is not gay, even though one of his books features a detailed explanation of fisting and even though pictures recently obtained but withheld from print by the Weekly World News allegedly revealed gerbils emerging from behind his scrotum. Hannity claims that he was just doing his part for PITA by providing some poor, homeless rodents a place to live, but an anonymous source quoted in the article said Hannity told him, "the gerbils embolden [my] rectal cavity so puppet masters like Mark Levine may slide their forearms in and puppet me with their Nazi political dribble. It's a whole lot easier than reading from tele-prompters."

Hannity is married so people don't dare call him queer even though his closet-busting is coming and will be celebrated by many of his contemporaries who have a contemptuous opinion of him. The short list to the party is reported to include DICK Cheney, Mouth Latrine, Glen Peckerhead (peck), Flush Limpwrist and some other insignificants.

The menace of "these people"[edit]

And how we can protect our business interests from them, while still having time for golf.[edit]

Hannity has been known to dispel the myths of liberal agenda by bringing Ann Coulter on his show and making racial slurs for separate ten minute segments. Because of reality's liberal bias Sean Hannity was always at a disadvantage even on his own show where high profile Democrats like Glenn Beck, Ann Coulter, and Bill O'Reilly constantly challenge his ideals.

Now, more than ever, we must work together to move forward for a better tomorrow[edit]

By which time, it will be then, more than now, at which point we will have to move backward to a better yesterday![edit]

“When will then be now?”

~ Dark Helmet on the starship Spaceball One

Hannity's signature catch phrases such as "You have to understand that these people can't be understood!", "I am the most humble man there is!", "Can I please get someone to violate my hilarious, tight rectum?" and "The most comprehensive coverage on your radio dial!" have entertained hundreds and baffled thousands more with their self-contradicting nature.

Hannity suffers from a very rare bone disorder (known as Spinal Retardiconservitalism) that tilts his head to the right and often completely horizontal. Often only seen off camera, the disorder has caused Hannity's view points and words to be skewed and fall off the right side of his face. On the book cover above, the image was flipped to show that Hannity still has no support for the smarter half of the political sphere. Having his head tilted to one direction has often sparked some critics to call him "Slanthead".