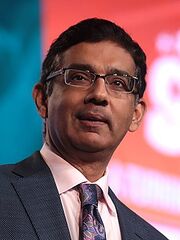 Despite his distinctive swarthiness, D'Souza has spent his entire career self-identifying as a white man.

Dinesh Joseph D'Souza (/dɪˈnɛʃ dəˈsuːzə/; born April 25, 1961) is an Indian-American right wing peddler of conspiracy theories. Wikipedia tells us that he is an author of books that have become New York Times bestsellers. But you should not read them, because they are presumably right-wing conspiracies.

D'Souza was born in Bombay, which got its name changed to Mumbai. It is not clear whether D'Souza had his own name changed, or how he got a name with an apostrophe in it, though apostrophes turn up in many places, such as Sebastian D'Anconia, Cap'n Crunch, Cap D'Antibes, and Don't Be Evil. But not Bombay.

D'Souza attended a Jesuit high school in Bombay, then became an exchange student and attended public school in Arizona. Our Wikipedia comrades tell us nothing about the student who traveled to India in exchange, but presumably that one didn't get in such trouble.

While in the U.S., D'Souza enrolled at Dartmouth College and wrote controversial articles for the Dartmouth Review. A notorious article on the Gay Student Association cited his sources, a practice now understood to be "outing" innocent students who were merely expressing their love as they saw fit. D'Souza's journalism took aim at all the college's sacred cows, so much so that supply-side Rep. Jack Kemp blanched and resigned from the Board.

From college, D'Souza went to work for think tanks such as the Heritage Foundation, which doesn't care what oxen you gore. In 1991, D'Souza became an American citizen. But the fate of the student he changed places with is still unknown.

For those without comedic tastes, the so-called experts at Wikipedia have an article about Dinesh D'Souza.

D'Souza has written a variety of books and — when that didn't suffice to outrage the American intelligencia — produced movie versions that the common man would scarf down alongside tubs of popcorn. Wikipedia has a complete list and explains why each one is an unprofessional smear. This is in lieu of rebutting the ideas D'Souza set forth, which would not fit the encyclopedic format.

What's So Great about America[edit]

D'Souza began offending modern sensibilities with his 2002 book, What's So Great about America, which asserted that the United States had given the world something beyond visitors to Europe in Hawaiian shirts insisting that everyone speak English and take dollars. D'Souza cleverly asserted that the descendants of slaves were living better lives than the average African who did not cross the Atlantic Ocean in chains. Aha! This was surely a defense of slavery.

The Roots of Obama's Rage[edit]

D'Souza reached his highest calumny in 2010 in The Roots of Obama's Rage (condensed into an op-ed in the September 2010 issue of Forbes — and condensed even further onto the matchbook covers of the era). It stated that most of Barack Obama's policies as U.S. President could be traced to his childhood upbringing at the hands of his father, a demented junk dealer named Fred Sanford. "Incredibly," wrote D'Souza, "the U.S. is being ruled by the dreams of a philandering, inebriated African socialist." Alas, D'Souza could not yet contemplate rule by either an orange-colored carnival barker or a senile sniffer of children's hair.

Imagine the World without America[edit]

D'Souza's 2014 book, Imagine the World without America, would be more of the same as What's So Great about America. However, Costco, whose warehouse stores are full of more of the same, yanked his book from the shelves, citing poor sales. D'Souza said it was selling just fine on Amazon, and Costco's leftie management was shamed into putting it back for sale when D'Souza produced a matching film, which was even more of the same.

Consider: Trump won many more counties than Biden; a map of the United States showing acreage rather than human beings is almost entirely Trump's red. If such a map is stuck on a wall with the thumbtacks at San Francisco and Boston, there are virtually no Biden votes anywhere. Biden was less popular than Obama with Pennsylvania pipe-welders and divorced women in Rhode Island. Is one to believe that Biden out-polled Obama among blacks? And everyone remembers gigantic, enthusiastic Trump rallies at county fairgrounds, versus Biden's press conferences from his basement in which he tried to read a teleprompter through a mask. "President Biden"? Flatly impossible. 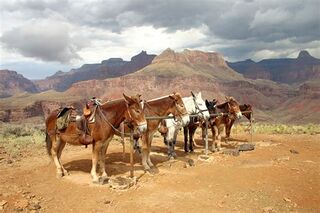 Six mules, from the Director's Cut

The 2020 election, recall, was held in the year of the Coronavirus outbreak, when state election laws were replaced with decrees, pulled from thin air, to enable voting without personal contact. The most popular method was mail-in ballots dropped into boxes downtown on any day you'd like to be Election Day, and retrieved by precinct poll workers...whenevah. It is D'Souza's thesis that the Democratic Party sent 2000 workers (mules) to various drop boxes to stuff them full of Biden ballots. The film cites:

The movie played well to Trump's cult following, but tragically, did not result in arrests and trials, in Biden resigning in shame at the misconduct of his subordinates, or as Trump has proposed, in an unprecedented 2023 "do-over" national election in which the people could freely cast Pity Votes.

But never mind any of the above. Waste no time studying the rebuttals. D'Souza is a crook! This happened in 2014, when D'Souza supported the campaign of New York Senate candidate Wendy Long. He contributed $10,000 to her campaign, and fatefully, gave two other people $10,000 to contribute in their own names. This fell afoul of U.S. election law, which is designed to limit the influence of money in politics and obviously does not. D'Souza called the high-rolling simply an act of "misguided friendship." The judge called it "Guilty!" and made the first giant leap into the era of laughably small sentences for criminals, consigning D'Souza to a halfway house with a nice Keurig machine, plus years of probation and a $30,000 fine, which cleverly showed D'Souza that an equal amount that he tried to give to the good guys was now going to be taken from him and find its way to the bad guys — in other words, that Crime Doesn't Pay!