The Left-wing is a population that promotes and adheres to the following guidelines, also known as human rights:

For those without comedic tastes, the so-called experts at Wikipedia have an article very remotely related to Left-wing.

The natural habitat of the left-winger is Southern California, Canada, parts of Manhattan, England (North London postcodes only), and much of Europe, except for Italy, Catholic Portugal and the South of France. The habitat extends southwards into Spain and parts of the Caribbean. The left-winger is unknown in the central US, and China. Although slightly known in Australia, it is ridiculed and mocked to the point of hiding in small self contained communities. It is rarely observed, and when it is observed here, it is not remembered due to everyone except the reclusive left-wingers being too drunk.

The left-winger often visits coffee shops to drink espresso or machiato. They can be attracted to suburban gardens by supplies of vegetarian food. For best results, ensure you have plenty of large trees to hug. 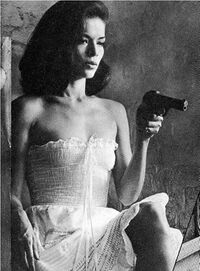 Bianca Jagger is so left wing that shoots left handed

As a political ideology, left-wing proponents believe that government is beneficial and needed to maintain social order, that taxation and an ever-growing list of laws are the price we pay for civilization and that facts should never get in the way of a good social program.

Due to an obsessive belief in their own righteousness and civil behaviour, left-wingers like to pretend that they refrain from discussions and dirty tricks that cost them elections, though in reality they are as much a bunch of sick, twisted bastards as their right-wing counterparts. They admit that democracy is defective, but argue that all the problems could be solved by preventing the right-wing from voting, or preferably strangling them at birth.

Left-wingers believe that right-wingers have an unhealthy obsession with politics, unlike left-wingers, who avoid the subject (except in every book and movie they make, every interview and speaking tour, and everything they say). Left-wingers avoid politics so studiously that entire media, such as Air America, the Guardian newspaper, and the Union of Concerned Scientists, have sprung up in order not to deal with politics at all.

Left-wingers believe that racism/sexism/age-ism/size-ism and all other ism's are totally wrong, unless they are used against old fat white guys from red states.

To left-wing people, anyone richer than them is greedy and must be destroyed and their wealth redistributed (preferably to the left-wing person, who, due to a fear of 'selling out' majored in something like revolutionary feminist underwater basket weaving studies or Catholic social thought and thus achieved only a middle-middle-class standard of living rather than the prosperity they think they deserve on account of their intellectual ability). Anyone poorer than the left-wing person is considered ignorant, right-wing scum in need of diversity training, higher tobacco taxes, and a lecture on the benefits of veganism.

A failure in the left wing led to the Space Shuttle Columbia disaster. So top rocket scientists are currently building a space shuttle with two right wings to prevent a recurrence. They have argued that the US Space Program always worked when good, patriotic Americans like Herr Doktor Obergrueppenfuehrer Wernher von Braun were in charge. Also, his rockets always used to hit London.